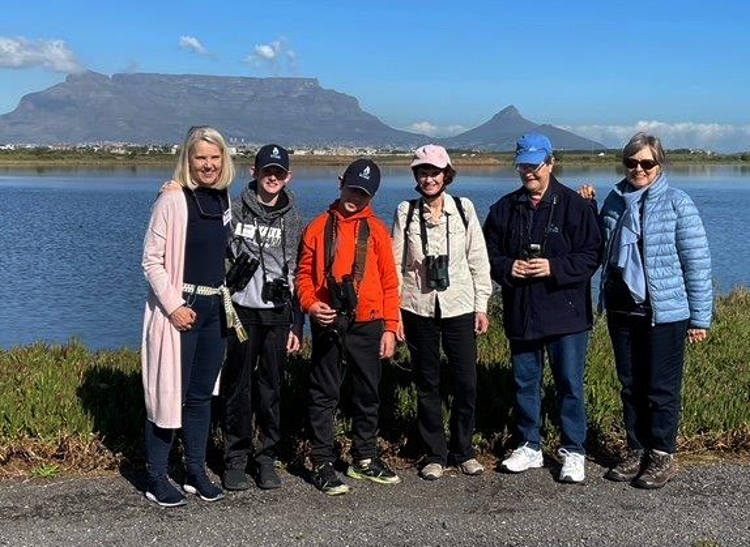 This day was a heavily anticipated outing. I love learning about the seabirds of South Africa. When we arrived at SANCCOB, we were immediately welcomed by Zach. Although he is only 11 he was as keen as mustard to go birding. A few minutes later, another junior birder, Alexi, arrived. But more about Alexi later.

Brittany was our guide for the tour of SANCCOB. I could tell that she had been doing this for a bit and was born a birder as she really kept me interested throughout the tour. She first told us about the permanent and long-term residents. They are in a separate enclosure and they either have bad feather conditions, are too seriously injured or are too tame to be set free. Some of the birds that we saw in the enclosure were Rock Hopper Penguins, a Greater Crested Tern, African Penguins, two types of gulls and a cheeky Cape Wagtail.

Next Brittany took us to the juvenile Cape Gannets. I’ve never seen a Cape Gannet, never mind a juvenile, and was especially happy to see them as they are the Bird of the Year. It was funny to see the Cape Gannets doing their daily exercises by flapping their wings and hitting the water. We also saw a Bank Cormorant which is a rare patient. I really hope to still see these two birds in the wild so I can add them to my Life List.

Brittany then showed us the vet areas. I was absolutely blown away by how cool the surgery items looked and how spotless everything there was. Last stop was the incubator area and then it was time for tea and biscuits.

Penny Dichmont and Heather Howell then gave out a new award to one of the junior birders. Alexi received the Seagull Award for his enthusiasm and participating in the most the junior birding activities so far this year. It will be a floating trophy handed out twice a year. Well done, Alexi.

After the tea and biscuits Zach and his mom, Lucille Kaspersen, Heather Howell, Helga Hill, Penny Dichmont, my mom Liz, and I went to Rietvlei. The vlei was filled with water, and lucky for us, also with birds.

The highlights were the two Greater Crested Grebes doing the beginning of their courtship dance and a juvenile African Fish Eagle being chased by two Hartlaub’s Gulls.

When we were looking at the vlei, we saw Red-knobbed Coots, Little Grebes, Common Moorhen, Glossy Ibis and an African Darter. While we were walking to the bird hide, we saw three Black-winged Kites, lots of Levaillant’s Cisticolas, Common Waxbills, Cape Teals, White-breasted Cormorants, Cape Shovelers, a beautiful Purple Heron and a possible Yellow-billed Egret on the other side of the vlei. It was just too far to see the legs properly.

There were flamingos in the distance but again we couldn’t all agree if they were all just Greater Flamingos, or whether there were one or two Lessor Flamingos as well. Overall, we saw 44 birds we could positively identify in Rietvlei. We included a Great White Pelican seen just outside SANCCOB in this count.

This outing really made me understand what SANCCOB is doing for these injured birds and helping their future to be safe and healthy.