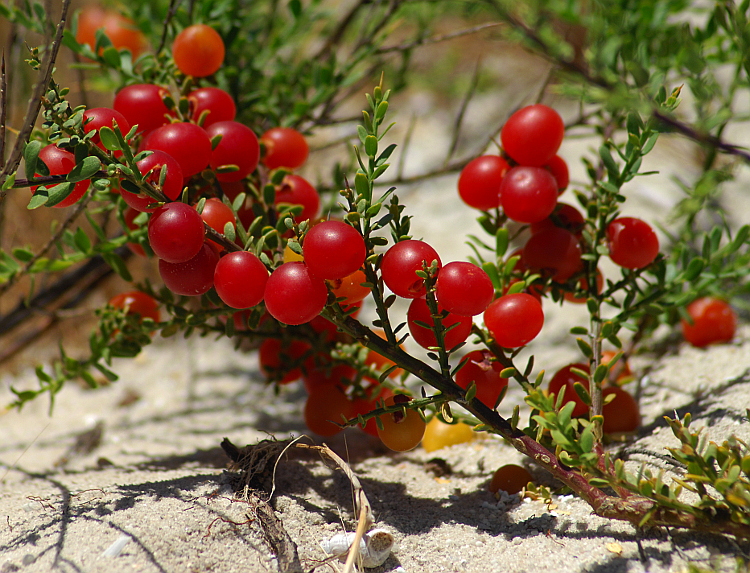 The afternoon Sunny with blue sky and SE breeze blowing, with a few light clouds over the mountain tops. The sun was hot. The estuary mouth was closed. There was no flow of water under the railway bridge, not often we have seen this.

The moles are busy with sand mounds being pushed up all over the place. There is a mole tunnel entrance which mice may be using see the photo. There were plenty of grass hoppers in the dry grass. No dragonflies were seen or other insect activity. There were a couple of new rain spider nests. There are still flowers in bloom, though fast diminishing as the long, hot and windy days end the spring season and go into summer. The tortoise or Christmas berries are ripe for the picking now.

Bert carried on cutting the large Manatoka trees, he said some had re-sprouted and had to clear the regrowth. Robin and I worked in the reed beds clearing port jackson saplings mainly with some rooikrans too. Progress is good there is no regrowth where we have worked this year.

There were very few birds in the air this afternoon, maybe due to the wind which picked up a bit see the photos of the yachts being blown over. Total species counted was 24. The flamingos were present and made a spectacular pink airborne show when they moved around the northern water edges. The highlight was the Yellow billed Kite patrolling along the reed beds and waters edge on the western shore.

Thank you very much to the Zandvlei 4 musketeers – the core group, and all others who have helped this Covid 19 year.