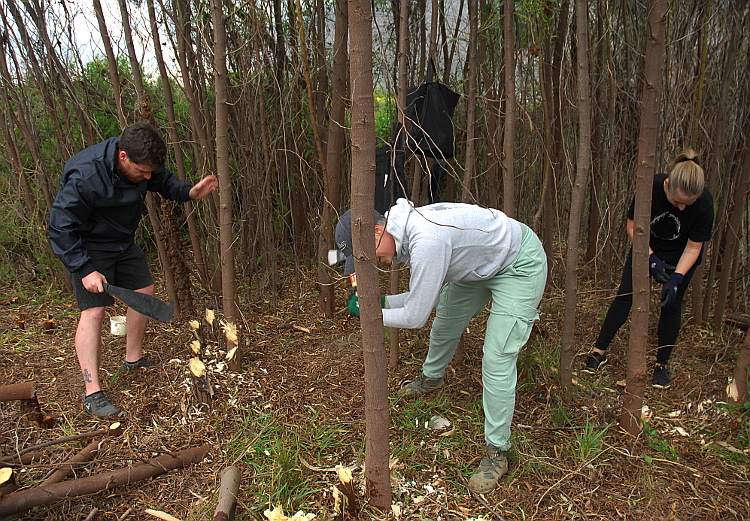 The weather was heavily overcast and rain was forecast for later in the afternoon. The wind was blowing from the north west although at ground level it was not too cold. Ideal for working. So we had Emma and Toinette back today, together with Kyle, Emma’s partner, coming to see what hacking was about. They work on computers all week so need to get out in the elements and do something constructive like helping conserve the habitat of the Zandvlei Nature Reserve.
While walking along a sort of partway we have made, we saw a foot print of a Grysbok and near the trees we found a fresh midden, a territorial marking spot of a male Grysbok. It is new, so he must have moved in the last month since we were here.

The girls got back into the swing of things (they brought axes with them and a new loper, thank you Tionette). Kyle soon got stuck into some of the bigger trees with a machete. I kept an eye on them to make sure they were not going to do an injury to themselves with their enthusiasm and energy. Barry, Bert, Robin and I carried on with what we know to do and the Port Jacksons started to fall. Kyle found a tree stem with some unusual growths on them. They are probably the wasp gall growth? The Cape Lappet Moth caterpillers were in profusion again today on 3 tree stems. They usually are in this stage of development in spring which is a few months away.

One can see in the last photo that there is not much left of “the forest”. On a quick walk around to the north of this site where a previous group worked there are numerous resprouting stumps and new saplings so there is work to do. There were some small mushrooms in an area where I found an otter scat. The invasive maderia creeper is flowering (yellow flower) in the reeds in the Keysers River. There is a construction in a photo which looks like a train engine appearing between the bushes. It is an old steering house from a boat which the residents nearby have erected in their garden.

Just as we were leaving the rain started to come down and it had become cold too.

Bird species were few again today, the foreboding weather being part of the reason. A total of 8 species were seen.