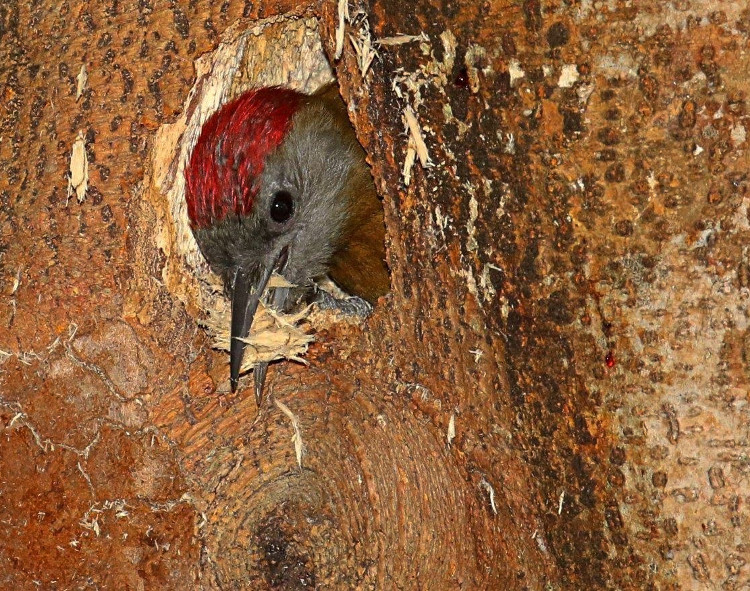 After meeting just after 8.00am we moved into the Gardens to have a short pre-walk chat. The group was fairly large, being 25 in total, but there were a couple of other Birders, namely Daryl de Beer and Linda Hibbin, who offered to assist with the guiding.
Before starting out, the group was told about a Tambourine Dove that had been seen and photographed by Gigi Laidler at the last bird count, and again seen by Penny Dichmont in the Dell on Sunday, just two days ago and so to keep a lookout for the bird. To the best of my knowledge, the sighting at the last count was the first recorded since at least 2007, which is when I started attending the counts.

The weather could not have been any better, absolutely no breeze at all and a crystal clear morning but it later became quite warm. The birds were also enjoying the morning, being very active and calling, especially the Sombre Greenbuls and Olive Thrushes.

We set off up the lawn in the direction of the Dell and in the first couple of minutes saw an African Dusky Flycatcher, Male Southern Double-collared Sunbird, Olive Thrush, Cape Robin-chat and Cape White-eye.
Soon after a Southern Boubou started calling with its unmistakeable loud whistle and Gigi picked up the tree from which it was calling. It was difficult to get a good view as it kept hopping around in the leafy canopy but most got a glimpse of it, and it then changed its call to a much harsher one, giving us the full repertoire.

Further up the lawn we saw Common Waxbills and a small flock of Bronze Mannikins in the distance.
As it was still early, and before there was an influx of visitors to the gardens, we decided to visit the Olive Woodpecker site on the edge of the Dell and were lucky enough to find the male woodpecker hard at work on the nest. You could hear him drumming away inside the nest and then, every so often, he would stick his head out of the hole and get rid of the small wood chips, which after a couple of weeks had made quite an appreciable pile on the ground next to the tree. Everyone in the group managed to get a good view of the bird and nest hole.

From here we followed the edge of the Enchanted Forest hoping to find a Lemon Dove but without success. We saw a couple of the more common birds before reaching the “Boomslang” canopy walk, which was uneventful until we reached the end. At this stage one of the visitors, Jacques, said he had just seen a small white Dove flying away and it actually flew over Gigi, who was in the forest below the canopy walk. He backed his belief that it was the Tambourine Dove and he and Gigi tracked it down in the forest and he got a couple of good photographs. Unfortunately it was really only seen by the two of them, but nevertheless a great sighting.

We continued up the southern edge of the gardens and came across a Sombre Greenbul, darting on and off the pathway, trying to catch a large green Mantis, which was not giving up easily. The sombre Greenbul is seldom seen in the open but this one was hungry and, although it was aware of us, carried on until it finally got hold of the Mantis and disappeared into the foliage. Daryl got some very nice photos of the event.

The day was now really warming up and a couple of the group were beginning to feel the heat, and so we headed downhill back in the direction of the Dell. We did add a few more birds to the list including Speckled Mousebird, Malachite Sunbird, Cape Sugarbird, Cape Batis and Karoo Prinia. Towards the end of the walk we picked up, African Olive Pigeon, Alpine and African Black Swifts and Swee Waxbills.
The final tally for the morning was 29 species, which was not too bad without any Raptors or some of the other common birds.
The highlight of the walk, as far as the group was concerned was, I’m sure, watching the male Olive Woodpecker going about his work quite oblivious to our presence.
My thanks must go to Dennis Laidler for keeping the bird list and Daryl de Beer for taking the photographs.