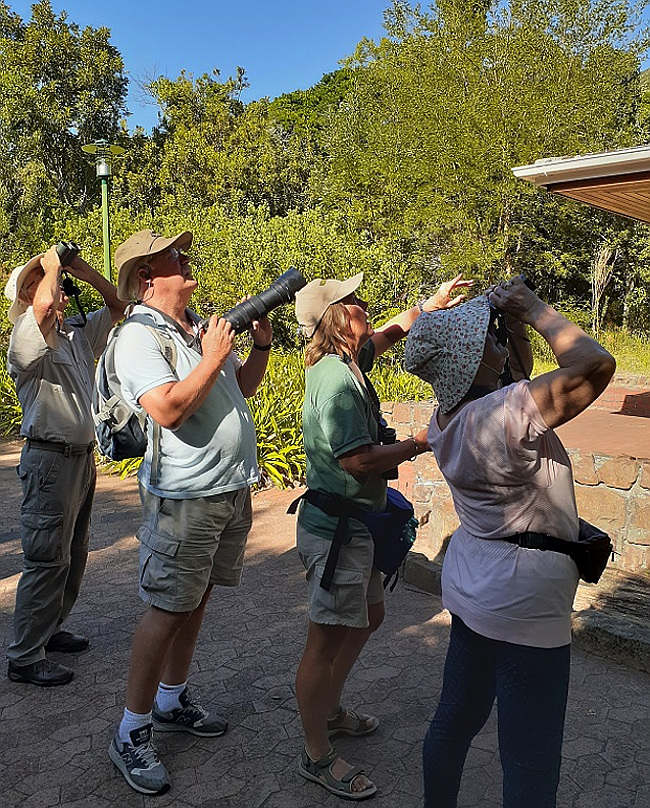 On a hot late summer’s day, with no wind, a group of birders set off at about 8 a.m. We were joined by some late-comers, making the total for the group 25. A Spotted Eagle-Owl was seen by some, just after the Conservatory, although it was far back from the path and could not be clearly seen. Felicity decided to go via the Sculpture Garden, and past the BotSoc Office, and end with the Enchanted Forest when it would be even hotter later on.

Many Bronze Mannikins were seen at the pond next to the BotSoc Office and Orange-breasted Sunbirds were plentiful. An Olive Woodpecker was heard and another seen briefly later. Fairly fleeting glimpses were also had of White-backed Mousebird and Southern Boubou. A few of the group followed a Lemon Dove along a narrow path, to a hidden glade (at the base of the stone steps below the top tea room). Those who waited patiently (including someone who had never seen one before) were rewarded with good views, as it emerged from behind a bench.

A female Klaas’s Cuckoo was seen flying into a large bush some distance away and remained there for at least ten minutes, giving most people a chance to enjoy the metallic coppery colours catching the sunlight. Another exciting moment soon after this was when a raptor, spotted in the distance by a sharp-eyed birder, flew past quite close to us. After some discussion, it was identified as a Black Sparrowhawk.

Another raptor which created some interest and discussion was a Booted Eagle which was seen while we were looking across to the smoke from the fire on Devil’s peak. A bit of confusion, as there was more than one raptor in the air!
Many African Dusky Flycatchers were seen during the walk, including lots of very spotty juveniles.

We ended the walk with the enchanted Forest and the Boomslang. By then it was fairly hot and the birds were quiet. How ever there was still enough to keep people interested whether it was birds or butterflies.

The final tally was 35 bird species including 5 species that were heard only.