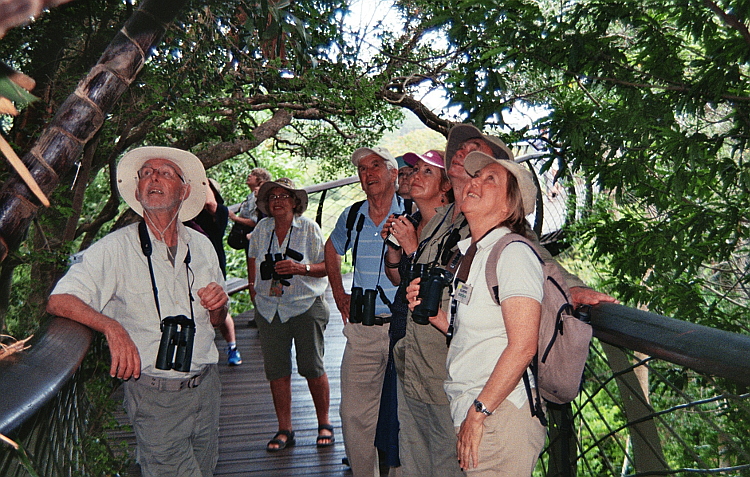 25 birders gathered on a rather overcast afternoon on Wednesday 12th December at about 4p.m and led by Felicity Ellmore. We did not see much in the first twenty to thirty minutes, and generally the bird sightings were rather low on the walk. The route went through the Dell, where we hoped to see the Paradise Flycatcher nest, which had given such amazing views before the chicks had fledged the week before. Unfortunately, despite a careful look, we could not see the nest and it seemed that it had either fallen or been removed.
We were compensated in the Enchanted Forest, however, by seeing a Cape Batis on its tiny nest high up in the fork of a tree right on the edge of the path. We proceeded to the ‘Boomslang’ where we looked at the now-empty Cape Batis nest which had been built on a wild banana, only inches away from the railing of the walkway.

Continuing to the protea beds higher up in the garden, we were treated to some good sightings of a number of Cape Sugarbirds. We then walked to the Wild Almond tree, where the Spotted Eagle-Owl has been frequently seen in the last few months, and had a good view of it. Members of the group were interested to hear how light the bird was, only weighing 700g.
Other enjoyable sightings included Swee Waxbill, Common Chaffinch, Sombre Greenbul and a pair of Egyptian Geese with nine goslings. Our only raptor of the walk was a Yellow-billed Kite.

By the end of two hours, we had seen 17 birds and 1 which was heard only. Although this was lower than the usual tally (which has averaged about 25 in the past year), it was a most enjoyable walk.
Thank you, Felicity!