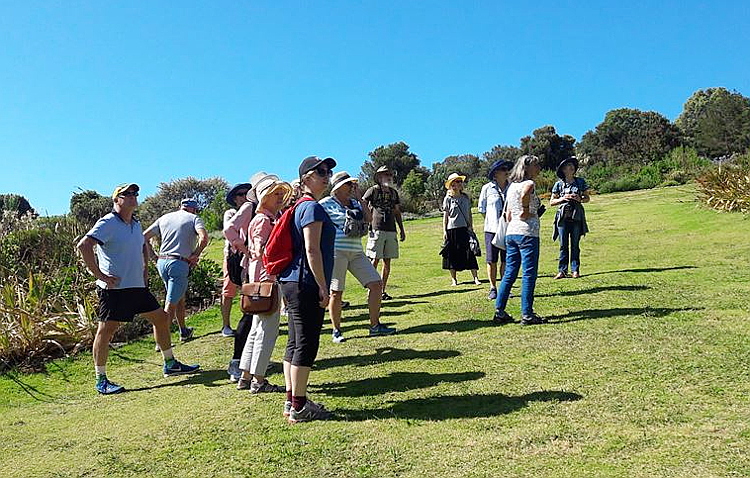 I had anticipated that this would be a popular bird walk as it was at a weekend and also during the festive holiday period – however I was rather taken aback when I arrived as the number of keen birders was quite large – we estimated just under 50 people!

Fortunately help was to hand and Dennis Laidler and Daryl de Beer offered to lead groups in order to split the big group, so we set off in different directions.

My group walked along the main path towards the Sculpture Garden. The most activity of the whole walk was within a few minutes of the start along that path, with both Common and Swee Waxbills present by the stream and then several other species in the trees on the right of the path, including and juvenile Cape Robin Chat, a Cape Batis and a pair of noisy Karoo Prinias. We continued towards the statue garden and the wetland but it was very quiet and starting to warm up. The Braille trail produced no birds unfortunately, however we did enjoy walking round a tortoise who was coming down the path as we made our way to the bridge over Skeleton stream. Our next best sighting was an Olive Woodpecker busy around one of the trees close to Owl Rock. Dennis had informed me that his group had found the young owl in the concert area, but we weren’t able to locate the owl.

We met up with the other groups and a few of us stayed for coffee and to draw up the bird list – it definitely seemed to be a case of “divide and conquer” as Daryl pointed out, as, between us, we recorded 34 species seen!