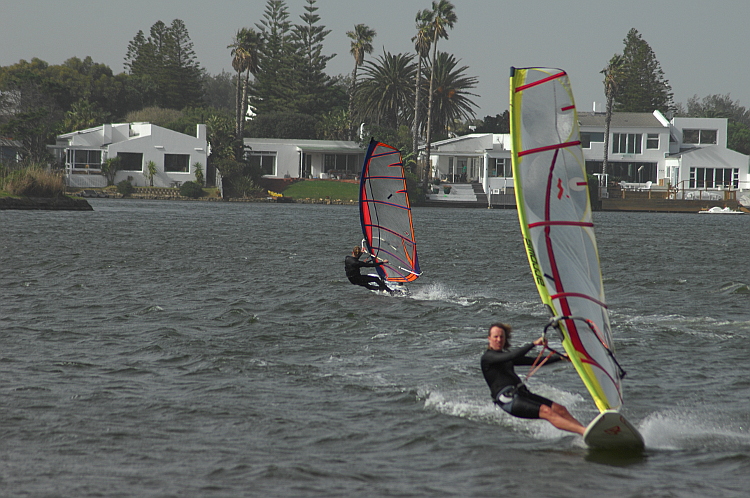 The August hack was back in action, with social distancing and facemasks as a participation requirement.

The wind was blowing hard from the NW. An approaching cold front with rain was due early in the evening, the sky was a brown hazy colour almost blocking out the sun. There were two wind surfers whizzing across the vlei leaving trails of white water in their wakes. There no birds in the air or on the open water. They were all sheltering near the edges near the vegetation. It still turned out to be a good birding afternoon with Yellow billed Ducks being the most prolific flying about. The highlight was 6 Black-crowned Night Herons which flew up and circled around for a while. A total of 35 species were seen. A Black shouldered Kite was perched on a dead tree over the canal keeping a lookout for some movement below.

The water flowing under the railway bridge was very clear and moving at a speed of 1 metre per 8 seconds. The inflowing rivers are clear of all waterweed.

Robin and Barry tackled flourishing saplings which they knew where they have grown since we were last here. Bert carried on in his area and checked for regrowth, his axe edge was gleaming in the sunlight from the honing. Susan and I carried on in the reeds where the sapplings have sprouted. She also found a chameleon in a port jackson tree.
Robin reported that for 3 days in a row he saw a large mole snake sunning itself on the north side of a bush. We wondered if it was the one we saw about 5 years ago? The pond at the end of Promenade Road is full to overflowing. In February Robin and I walked in the bottom of the pond which had almost completely dried out and we estimated that this would be about 2.5 – 3.0 metres deep below the full level.

On walking back past the pond we saw clear deep foot prints of a Greysbok from early this morning.