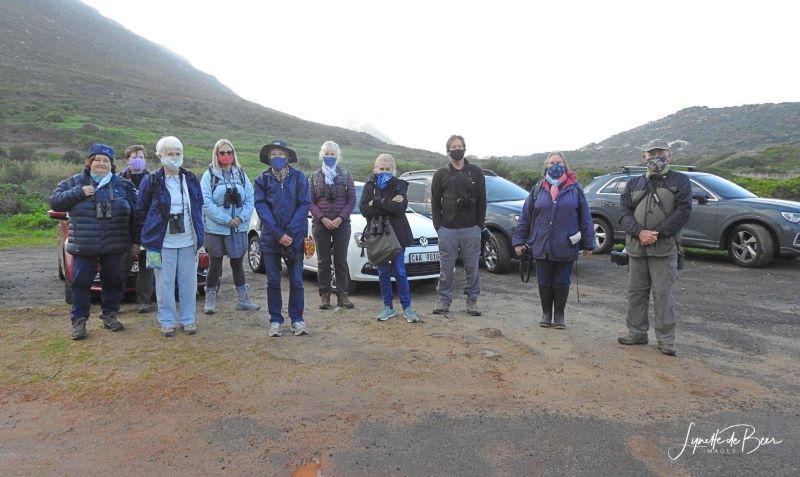 Although Spring had sprung Winter made sure to let us know that he was not ready to leave just yet and the Wednesday was a particularly cold and wet day with a wind fierce enough to keep the keenest birder indoors.

Fortunately Thursday dawned overcast and chilly but with a beautiful calmness in the air, not even a gentle zephyr blew.

Twelve of us gathered at the parking area next to the old farm houses at Sunbird Centre for the first official Cape Bird Club outing since the lockdown on 27th March. It was good to see familiar faces and meet the new members who had joined the club just before the restrictions commenced.

We started off along the road towards the turnoff up the hill through the old farm fields with the tangle of bushes and trees on the sand dunes to our right and the Silvermine River in full spate on our left. Cape Bulbul, Southern Fiscal, Southern Double-collared Sunbird and Southern Boubou were seen, whilst a Cape Grassbird and Karoo Prinias were singing merrily and eventually showed themselves well. A Yellow Bishop flew past and perched on a reed but unfortunately did not stay long enough for better views.

A Jackal Buzzard, one of a pair that inhabits the area, was flying over the ridge of Peers Hill accompanied by two White-necked Ravens.

The gentle climb up through the fields saw us squinting into the sun looking for the Malachite Sunbird, Cape Grassbird and Cape Sugarbird calling amongst the fynbos bushes. All were eventually seen. Noticeable by its absence was Orange-breasted Sunbirds, which seem to be few and far between. A Cape Turtle Dove (Ring-necked Dove) was also calling and eventually flew into a dry tree to catch a bit of sun.

Whilst scanning the vegetation for the Bar-throated Apalis pair Lynette noticed a boomslang sunning itself on the top of a tangle. Earlier we had seen a grey mongoose going about its business along the path. It is always good to see other creatures whilst out birding.

By the time we had reached the ruins of some old farm buildings it was baking hot and winter jackets and jerseys were having to be taken off. A Jackal Buzzard was seen perched on top of a dead tree just across the river and almost at eye level giving everyone a good chance to get up close with the binoculars and cameras.

Alpine and African Black Swifts were flying above us and were low enough to see well. Not so low was a Rufous-chested Sparrowhawk soaring into the sun. A lone Greater Striped Swallow was seen speeding away over the hill.

My thanks to you all for joining me.