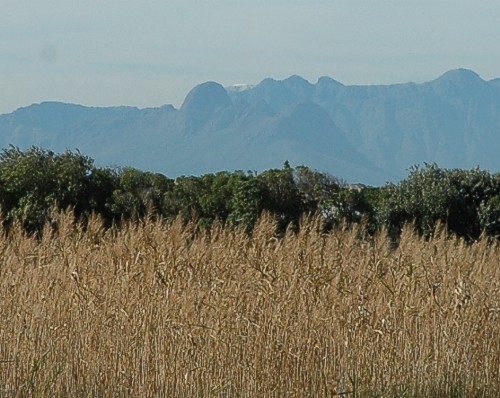 Snow was visible on the Helderberg and Hotentot Hollands mountains today.

The air temperature was warm, with very high overcast clouds and a NW breeze blowing. The mouth of Zandvlei was open with a flow rate under the railway bridge at 1 metre per 6 seconds.
Back in Management Block 27 we continued with mainly Brazilian Pepper trees, Sue worked on the large clump of Pampas Grass. We noted that Metrorail workers had dug a trench alongside the railway line and buried what could be fibre optic cable trunking. A sizable palm tree which will have to be cut down. Metrorail people trimmed a few branches off which were getting in their way, instead of cutting the whole tree down. Bert, Windell and Barry worked in the reeds cutting more Brazilian Peppers.
Moira was recording her son Ryan (schoolboy volunteer) cutting down a Port Jackson sapling. Ryan was doing his community service hours for his school requirement. Robin assisted him to cut down a Brazilian Pepper stump which had started to copse (grow multiple arms) as it had not been previously cut down low enough to the ground and treated properly.

The bird count was 33 species for the afternoon for the MyBirdPatch block.The Sea Cadets were clearing pond weed in front of their launching jetties. Later on the yachties were training on the vlei. There was a man seen lying next to the railway tracks. It was suggested “He is listening for the next train”. Later on when he past us, he did not appear to be “all there” mentally or was possibly “flying on some substance”.

“Dr Watson I presume? This must be the equator, is it Mr Livingstone?”. “No Sir, this is the Zandvlei Nature Reserve boundary fence.”
This was Barry emerging from underneath a very dense Brazilian Pepper tree.

Now there are Poplar tree saplings coming up along the edge of the railway tracks. This is a difficult species to control especially in a wetland area.

Finally the concrete pole has been toppled. Some destructive person /s have been chipping away the concrete over the past 3 years, to get hold of the metal box at the top of the pole.
The box used to contain the sensor and transmitting equipment for the water level monitoring of the Keysers and Westlake Rivers.

…and this pelargonium was flowering in an area we had previously cleared of invasives and it has started to thrive again.

The fisherman was getting his kit ready to do some fishing. The floating boom is holding back the invasive waterweed so that it can be manually removed. 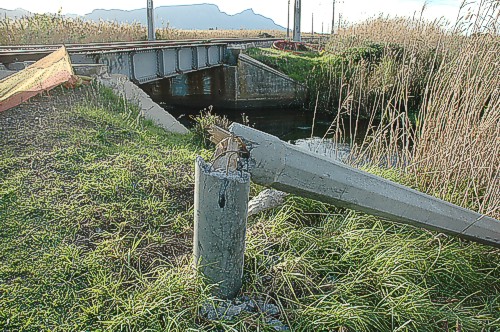 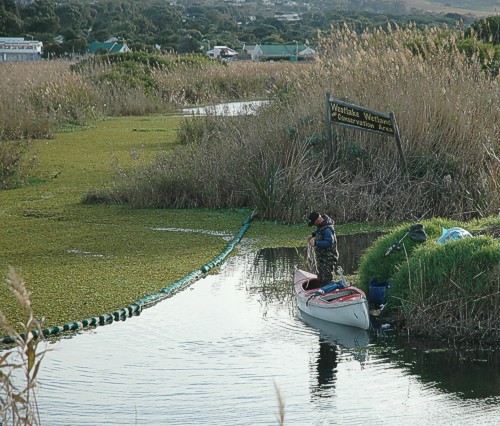 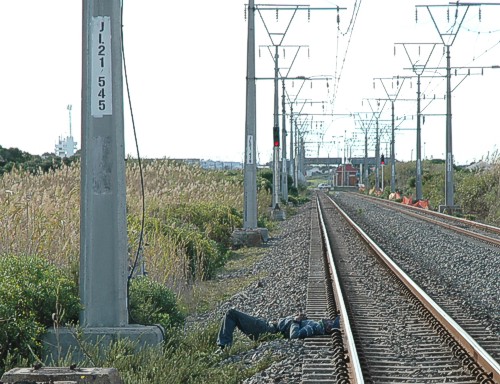 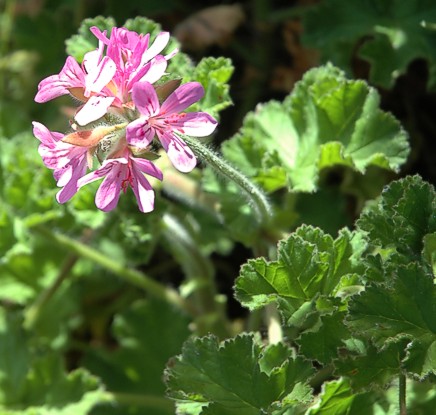 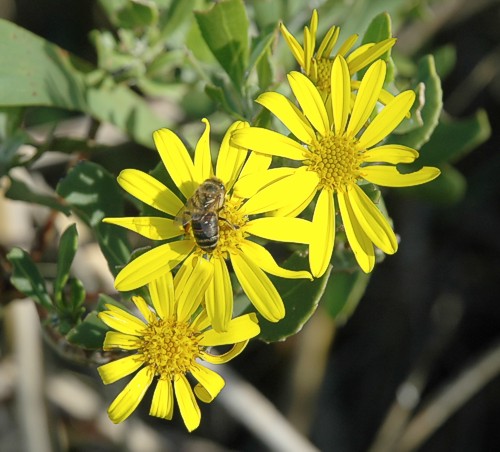 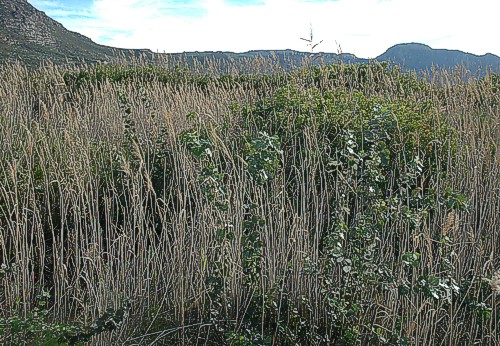 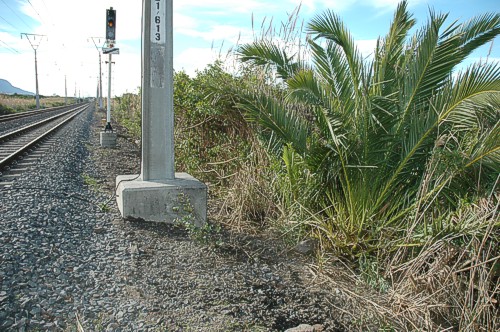 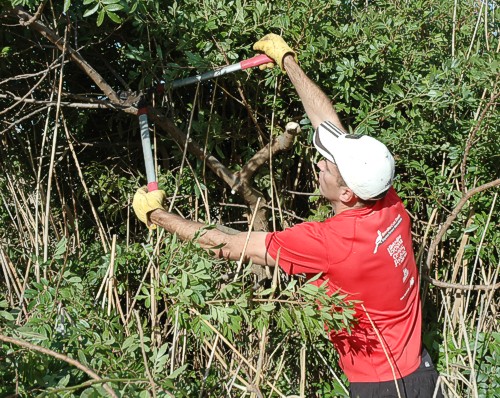 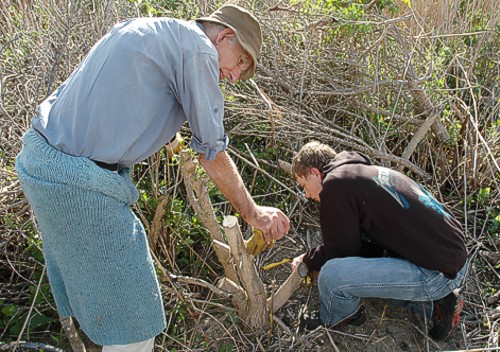 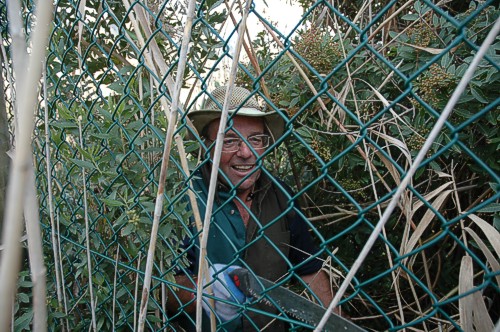 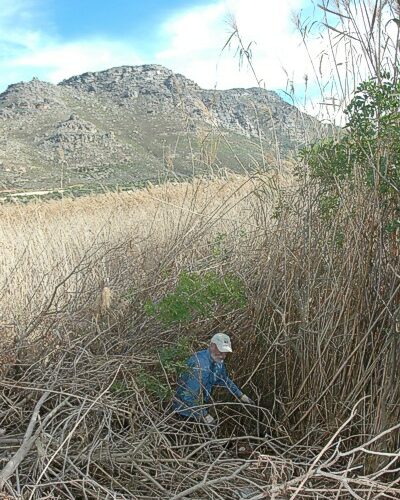 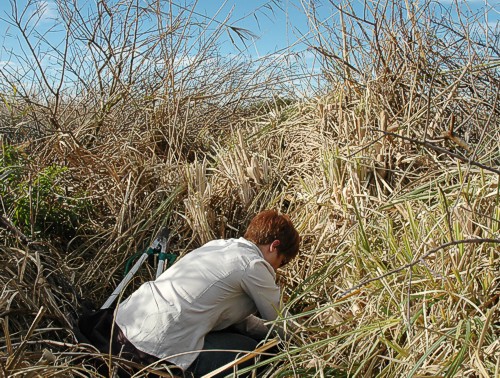 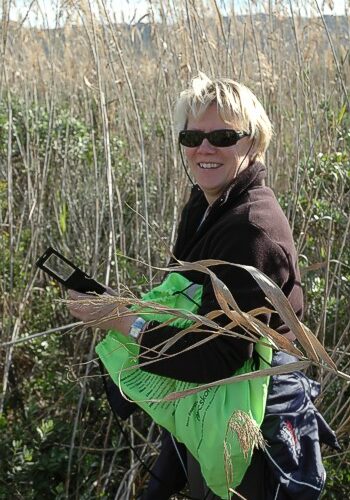 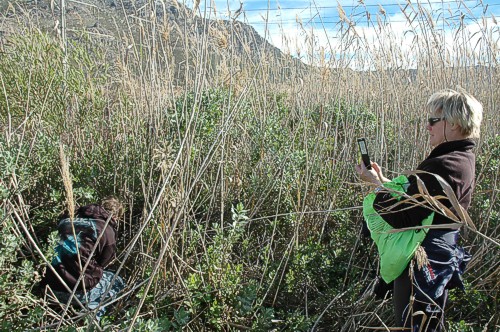