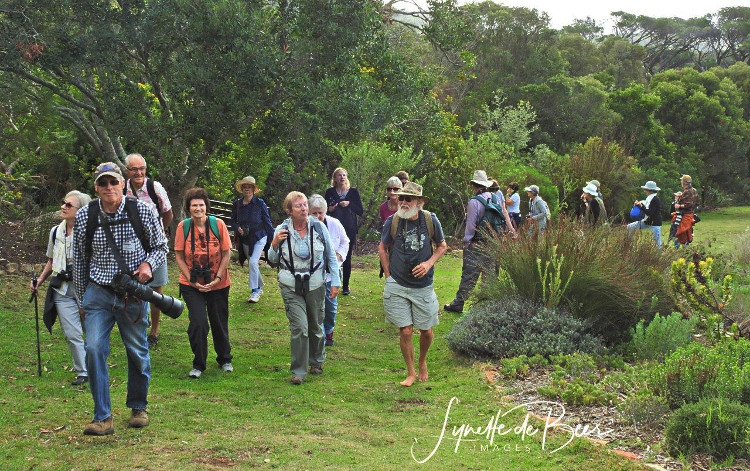 There were about 24 keen birders who arrived for the beginning of the April Kirstenbosch bird walk, including a couple of visitors from overseas. There was some confusion about the starting time, so eventually we were a group of at least 28.

We started walking towards the statue garden and enjoyed sightings of Common and Swee Waxbills, Bronze Mannekins as well as Cape White-eyes and Southern Double-collared Sunbirds. There were a couple of Speckled Mousebirds at the Botanical Society Office and a single Black Saw-wing Swallow flying around.

As we walked up the Braille Trail, a young member of the group spotted a Lemon Dove sitting on the branch of a tree – the bird was about 2 metres off the ground, not where we would usually expect to see this dove. The Spotted Eagle Owl was not sitting in the Wild Almond Tree as we’d hoped, so we carried on up to the top corner of the garden, to the Silver Tree “forest” and found Cape Sugarbirds.
We did find one Spotted Eagle Owl in the trees close to “Owl Rock” and as we walked along the path we saw and heard a commotion in one of the beds higher in the garden. There were Cape Bulbuls, and Orange-breasted and Southern Double-collared Sunbirds in a large restio all very agitated; as we approached a Cape Robin-chat flew out from the vegetation very rapidly. We decided there had probably been a snake, but we weren’t able to see the reptile.

We wandered down through the garden and along the Boomslang Walkway looking for birds along the way. Our final total was 29 species.

photographs by Daryl and Lynette de Beer, and Janette Louw.