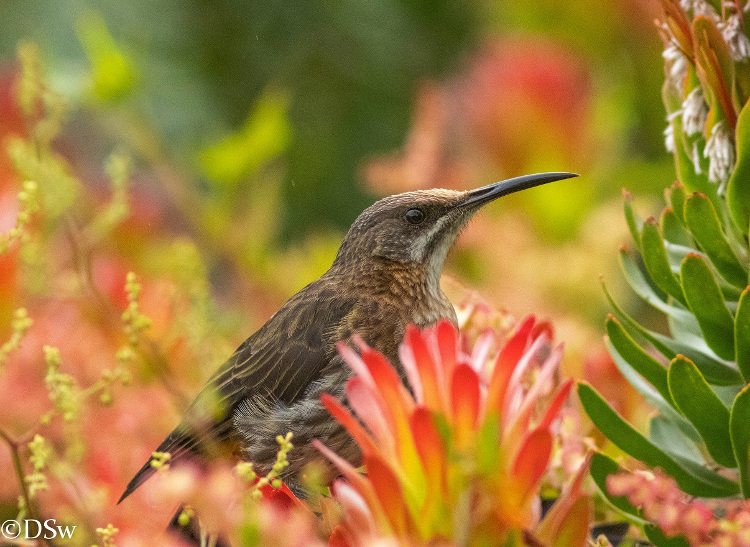 Despite the fact that it was a misty morning, a keen group of 30 birdwatchers arrived just before 08:00 for the November Kirstenbosch bird walk.
Around the entrance we could already hear Cape White-eyes and as we entered lower reaches of the gardens we were soon treated to good views of the likes of Sombre Greenbul, Cape Canary, Southern Double-collared Sunbird and a few Bronze Mannikins. We also saw Egyptian Geese here and had distant but good views of White-necked Raven but a biggish raptor flying away from us didn’t hang around well enough for a positive ID.

There was a noisy group in the enchanted forest and we therefore at first didn’t see many birds but we soon encountered an Olive Thrush scurrying about and the leaf litter looking for a snail or a worm to eat. Linda knew of a Cape Batis nest in a creeper along one of the Boomslang walkway’s support pillars and we were lucky to see a female sitting on the nest. In our hurry to get to the nest we passed a Lemon Dove but the rest of the group reconnected with the bird just before we got onto the Boomslang.
On the pathway above the Boomslang en route to the upper reaches of the garden we first saw three Brimstone Canaries, then some more Cape Canaries and finally a couple of Forest Canaries. Here we also saw our first Cape Sugarbird for the day and added Malachite Sunbird to the day list.
When we got to the Protea Garden it started drizzling and then the drizzle soon turned into a slightly more insistent shower so we decided to head down into the Dell for cover, but not before we laid eyes on a Black Saw-wing flying swiftly about. Just before heading into the Dell Tim, and Australian Birdwatcher who joined us for the morning indicated that he saw a Spotted Eagle Owl. A few birders who wanted to see the owl then split off to go look for it while the rest of the group continued to the Dell in the hopes of finding African Paradise Flycatcher. In the Dell an African Dusky Flycatcher gave us all good views whilst darting about after small insects and we then found an Olive Thrush feeding its young at a nest.

The drizzle subsided a bit and we decided to go look at another potential Spotted Eagle Owl hangout in an Almond tree along the edge of the Erica Garden. En route to our owl stakeout spot we encountered a small group of Swee Waxbills accompanied by a single Forest Canary on the lawns near the Erica Gardens. Swee Waxbills in the bag, we then moved on towards the Almond tree where a single Spotted Eagle Owl entertained the whole group with stunning views. After everyone has had their fill of the owl spectacle we slowly started making our way back towards the enrance, but first stopped at the lawns again where the Swee Waxbills were joined by an adult male and a juvenile Chaffinch, a couple of Bronze Mannikins and a Common Waxbill.

Back at the bottom of the gardens we heard Little Rush Warbler calling from the direction of the ponds and then saw a Levaillant’s Cisticola on a flower which then flew up and landed on an exposed perch in a thorn tree from which it announced its presence to all and sundry. As we exited the gardens at the turnstiles we saw a Red-Winged Starling sitting on a roof, the final bird on our list for the day. While a few of us enjoyed a cup of coffee at Vida near the entrance, one of the group members who walked back up into the gardens as the rest exited told us she saw African Paradise Fycatcher – which brings the total bird count for the day to 36 species, a satisfying number for a misty and drizzly morning.