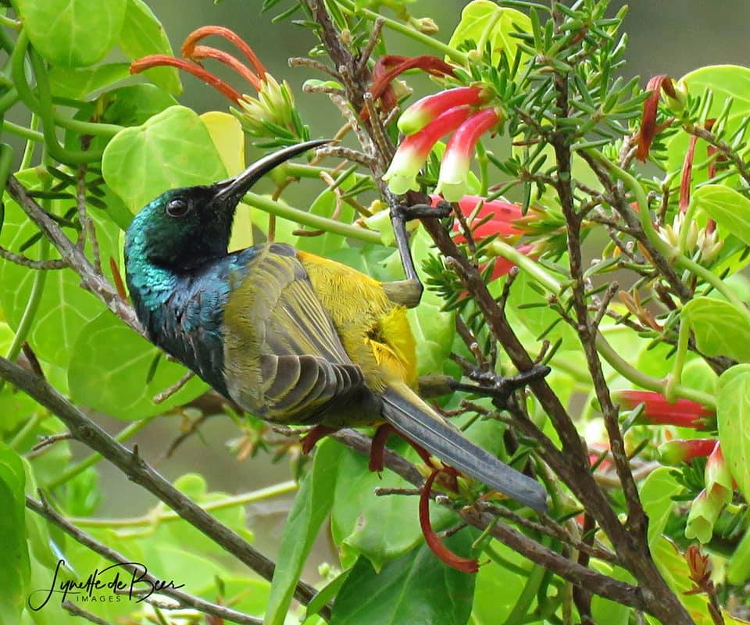 A group of 16 birders met at Kirstenbosch for the bird walk on the 10th January, 2019. The weather started out sunny and warm, but soon became overcast and cloudy, threatening rain.

We walked up towards the concert lawn, picking up Forest Canary, Southern Boubou and Speckled Mousebird, when we heard the harsh call of the Olive Woodpecker. Heading towards the source of the call, the group came across a pair of the birds moving around in the trees at the top of the concert lawn, giving the whole group an excellent sighting.

In the Enchanted Forest we were treated to fantastic views of two very confiding pairs of Lemon Doves, as well as a young bird. Just a little further on, there was a pair of Cape Batis feeding chicks on a nest, which was one of the highlights of the morning.

It became quieter up towards the Protea Garden, but a family of Cape Spurfowl, three African Harrier Hawks, a Rock Kestrel and Orange-breasted Sunbirds kept the group entertained. As we headed down through the lower sections of the garden, we came across several Swee and Common Waxbills, which provided good photographic opportunities.

After birding for about three hours, we finished on a list of 29 species for the morning. Thank you to everyone who was able to come and bird on this walk, and thanks to Daryl and Lynette for the pictures.