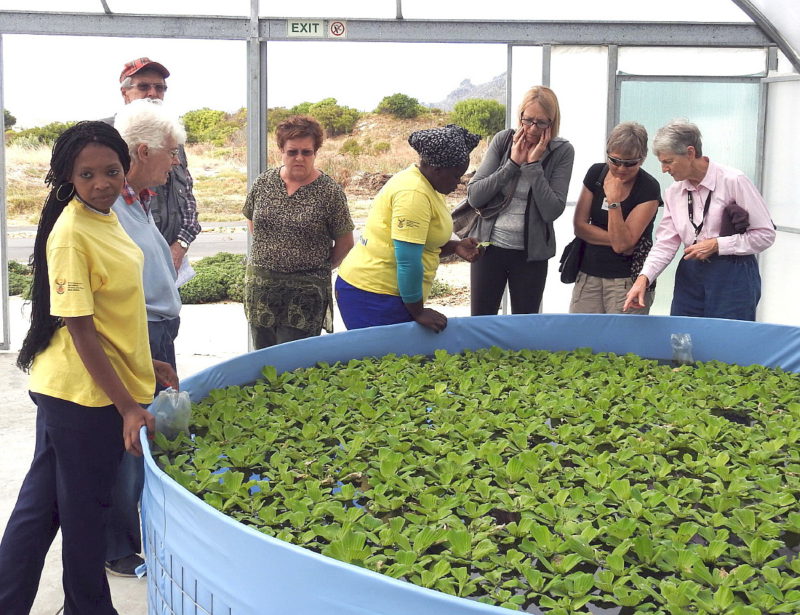 It was all about bugs and not birds when eight CBC members met at Westlake to visit the Bio Control Unit on Tuesday 4 April 2017. Most of us are aware of the problem with the invasive Water Hyacinth at the Strandfontein Birding Area, but there are several other invasive water weeds choking some of our rivers, dams and waterways.

The Cape Town City’s Invasive Species Unit is now known as the Green Jobs Unit and their project manager, Sisanda Nune, gave us an introductory slide presentation outlining the history of the importation of the useful insects which are now used to control these weeds, as well as the need for careful research before they could be released into our country.

We then moved across the road to one of the two plastic domes housing eight to ten water tanks, some with flourishing crops of Water Hyacinth, Parrot’s Feather, Kariba Weed and Water Lettuce, and others in which the relevant control insects were already breeding. These plants were looking less happy and decidedly nibbled. We were shown some of the insects, mostly to be found deep inside the inner leaves. Some of these insects are so small that “collection” has to be done with a fine paintbrush and a steady hand. Staff present assured us that this was no problem!

Any official bodies with an invasive water weed problem should contact the Green Jobs Unit, giving precise details including accurate plant identification, exact location and outlining the extent of the problem.

They really do a great (green) job.

Thank you to John Fincham for the photographs.