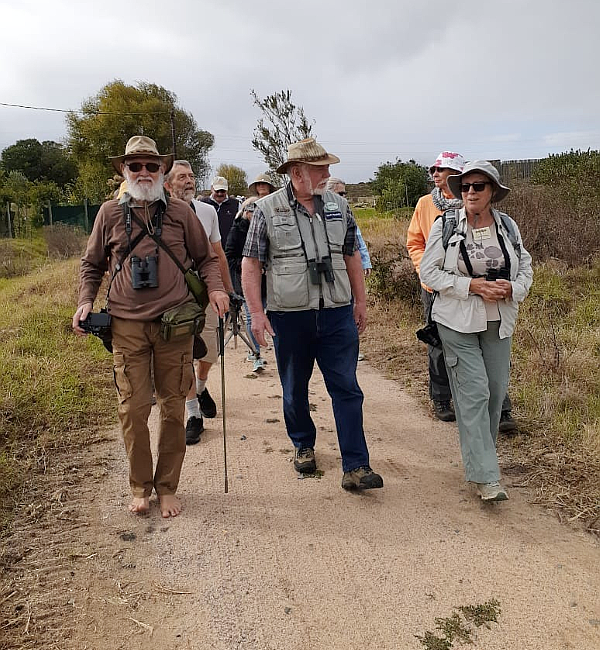 On Thursday 7th April 24 birders (including visitors from Gauteng and the Somerset West Bird Club) arrived at the Spier parking lot to find it was an unexpectedly dull day.

My particular party was about 5 minutes late due to an accident on the N2 highway. By the time we joined the others, who were waiting for us at the pond, they already had 14 species under the belt.

We were sad to see a dead Sacred Ibis hanging in a tree. One wonders how it ended up like that. Did it misjudge its landing or take-off? Was it involved in a fight or what? Their dead comrade didn’t seem to bother the other birds who were happily occupying branches nearby. Nature is strange!

Moving on, we had an interesting view of an Intermediate Egret in the, apparently rather difficult, process of eating a bird. One pink and gangly leg dangled, obstinately, out of either side of the Egret’s beak like the two arms of an anchor, slowing down the dispatching process.

The weather was becoming rather unpleasant with an icy bite to the wind and even a brief drizzle. The birds seemed to be keeping a low profile but an African Hoopoe was busy foraging on the lawns, brightening the surroundings with its unique looks and colouring.

As we crossed the bridge over the lovely Eerste River, bubbling and splashing its way over the rocks, a warbler popped up out of the bush. Quite some time was spent trying to decide exactly which one it was. Unusually, it actually gave us quite a number of decent views, remaining out in the open several times as if to say, “Come on, people! What am I?” A second one came to join the fun but it didn’t help with the ID. A call would’ve helped but all was silence. Eventually it was decided that they were Lesser Swamp Warblers.

A Jackal Buzzard took a twirl just above the horizon ahead of us, giving us a beautifully lit flash of his chestnut tail and breast as he turned and flew off.

We came past a field with two Black-headed Herons moving about to see what there might be to eat amongst the many stalks that had been recently cut down. As we turned the corner in the path we saw two more quietly sitting in a tree and at least another three were flying in towards the field. It appeared to me that some enigmatic Heron hotline had been used to spread the word about the field.

The nearby scenery at this point was pretty dull but suddenly there was a glorious bunch of March lilies (Amaryllis belladonna) in deep and vibrant shades of pink adjacent to heaps of soil and rubble – a marvellous juxtaposition of natural beauty and man-made ugliness brightening our view.

As we were searching the river for the African Black Ducks we had seen flying in to land, we were greeted by our first view of the Fork-tailed Drongos and then a Yellow-billed Kite glided past and obligingly, for Daryl, settled in a tree some distance away for a photo session. Vic said it was nice to see him, but what was he doing still here?

On crossing the bridge going back over the river, we had to move out of the way for a large group of Segway riders which seemed to include both foreigners and locals. The enthusiasm and professionalism of the three friendly guides bodes well for our tourism sector. It was also interesting to observe how the riders’ original trepidation had turned to confidence by the end of their trip.

We finished our walk back at the pond where a Purple Heron was showing nicely. Although it had seemed quiet, we had a respectable final count of 48 species.

Spier Wine Estate is a very pleasant outing, not too strenuous, but covers a selection of different habitats and always gives a good selection of birds. Twenty-four birders came along for the outing which included some up-country visitors and a couple of visitors from Somerset West Bird Club.

We started our walk at the dam in front of the wine tasting centre and were straight away rewarded by a pair of Malachite Kingfishers flitting in the reeds. There were a number of Yellow-billed Ducks on the water and also a number of hybrid ducks among them! Coots, moorhens and cormorants were also present in numbers. Also spotted were Little Egret, Lesser Swamp Warbler and Black-headed Heron.

Walking through the gardens, we found African Hoopoe, Olive Thrush and Cape Robin-Chat. As we crossed the river on the pedestrian bridge there were Cape White-eyes, Swee Waxbills and Cape Wagtails.

We were lucky to see a fast-flying African Black Duck along the river. Other birds seen along the river were Fork-tailed Drongo, African Dusky Flycatcher and Yellow Bishop.

After we crossed the river we walked along the fynbos area where several raptors were spotted, including Black-winged Kite, Jackal Buzzard, and a reluctant-to-head-north Yellow-billed Kite. Bokmakieries were calling higher up in the Renosterveld.

We crossed the river, back over the old bridge, to the gardens again, and found a few new birds, including Southern Grey-headed Sparrow on the lawns. On the dam we added Purple Heron and a Giant Kingfisher!

We had a pleasant morning’s birding and finished with a total of 48 species.

If you have not visited Spier Estate, I can recommend it, and you can always end up with a glass of delightful cool wine!