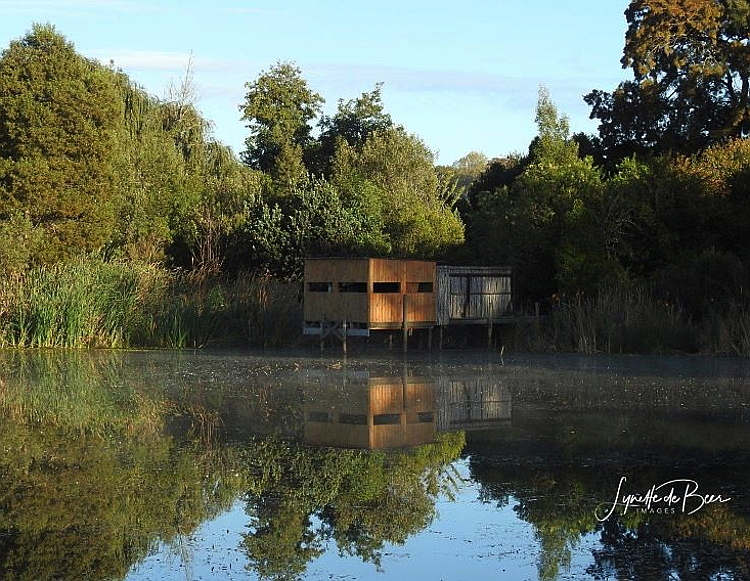 The first cold day of autumn/winter coincided with our arrival at Keurbos Nature Reserve, outside Elgin. The morning was soon warmed up by the smiling welcome of our leader, Carin Malan, and shortly afterwards by Jessie Walton on her farm-mobile, suitably equipped with front basket full of trailing plant cuttings and a rear trough filled with spades, other trimming tools and a few more plants. And sitting next to her on the seat were her two constant companions, Milla the black poodle-doodle sitting up as navigator and the Joe Cool Lotti, the brown rescue mixture, acting as gaatjie – both wagging their tails in greeting.

Jessie led the way into the Bird Reserve and the large group of 35 followed her in. We soon sorted ourselves out into smaller informal groups as the many viewing sites, including the hide, could only accommodate small numbers at any one time.
Despite the cold, but with not a ripple on the dam, the birds were abundant. Many specials were seen and enjoyed by all. Within ten minutes of reaching the dam, we had excellent views of two Black Crakes with a juvenile.

At one of the smaller sections of the dam, we enjoyed views of four White-faced Whistling Ducks, as well as a tantalisingly brief fly-past of a Giant Kingfisher. Zoe, sitting further down in the hide, managed to get a view of the kingfisher (a lifer) as it sped there – but regretted not being able to take a photograph of it. With her sharp eyes, she was the only member of the group to get a (very brief) view of an African Rail, which was close to the hide, and a Tambourine Dove, flying through the trees.

Another exciting sighting was of a Little Bittern, seen for only a couple of minutes, by Gill Ainslie.

The walk around the dam is also an easy, level stroll for those no longer enjoying steep inclines or descents. Carin had told us to look out for Spotted Eagle-Owl, which some of the group later saw perched in a willow tree.

After about two hours we regrouped and formed a cavalcade to follow Jessie on her solar-powered vehicle back to the main farm and up through the apple orchards to view her lockdown project of transforming an abandoned terrace into a fynbos /renosterveld mountainside garden, especially planted with birds and butterflies in mind. With close to 5,000 plants added to this barren slope, it is already showing much growth and starting to attract birds. Jessie needs to be admired as the holes being prepared for the plants needed to be pick-axed out of the hard, stony slopes.
Walking to the dam below Jessie’s fynbos garden

Down at the bottom of the drive, Jessie showed us her bird sanctuary for injured birds. At present the “Flight Cage” (shown on the left of the photograph) was accommodating a Western Barn Owl. This was the last of four Barn Owls, brought in to Jessie after they had fallen down a chimney. Other birds which she had cared for include Jackal Buzzards and an African Harrier-Hawk. Adjoining the cage was a pen which Jessie used for her ‘bokkies’, such as duikers, and other small animals.

From there we proceeded to Jessie’s house where we were able to enjoy our tea on her large deck overlooking another dam. An exciting moment was when another Giant Kingfisher was spotted on a cable near the dam. Zoe was able to get her photograph, which had eluded her earlier in the morning!

As we were packing up to leave, after a wonderful morning, Jessie’s earlier disappointment, when her favourite Jackal Buzzards did not make an appearance, was dispelled. Two buzzards suddenly flew from behind the trees on the right of the house, right in front of us and out over the dam. What a grand finale to a most interesting and rewarding outing!

A total of 48 bird species were seen. Our thanks are extended to Carin Malan of Overberg Bird Club for leading us and to Jessie for once again hosting the Cape Bird Club at her Bird Reserve and home. Both ladies, sharing so much enthusiasm and warmth, helped make it a most enjoyable visit.

Postscript: Jessie mentioned that the best time of year to visit her bird reserve was in spring, when one can observe the active heronry. Many people on the outing were keen to return, so an outing has been planned for the CBC on 9th October. (Note: this will be the second Sunday of the month, not the third Sunday, as is usually done.) More details will be given closer to the time.

Report by Gill Ford with additional comments by Penny Dichmont.