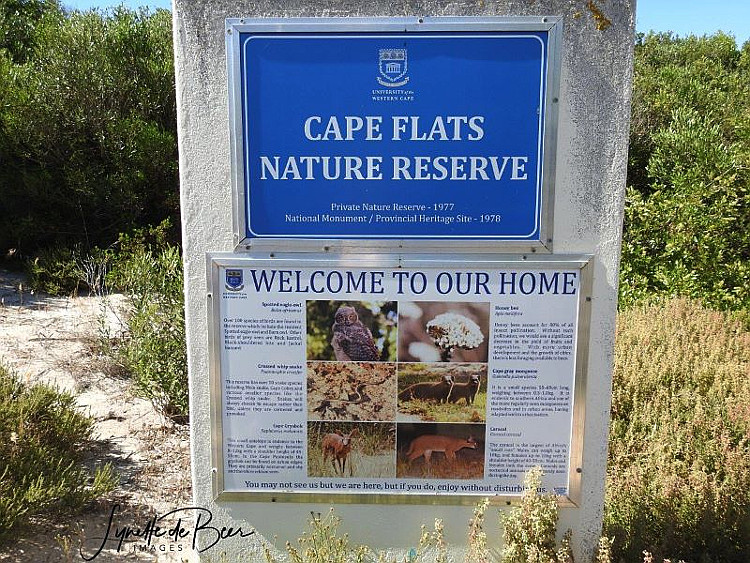 Twenty five Cape Bird Club members, including a couple of new members, enjoyed a warm and sunny two and a half hour walk through the 32ha reserve.

Tracks and paths cover most of the reserve which comprises a mix of highly threatened Cape Flats Sand Fynbos and Strandveld. Our first and longest loop took us to the eastern portion past the small wetland.
Among the early species seen were the Chestnut-vented Warbler (formerly tit-babbler), Rock Kestrel and Black-winged (formerly Black-shouldered) Kite. Levaillant’s Cisticola and Yellow Bishop showed well at the wetland.

After visiting the high dune adjacent to the railway line we took a very welcome break from the sun at the large thatched ‘picnic’ structure where we heard the Acacia Pied Barbets, which we’d seen earlier in the week.
On arrival at the structure Dieter Oschadleus and Gerald Wingate spied a Palm Swift feeding among the Little and other swifts wheeling overhead and on departure Gerald spotted a beautiful Spotted harlequin snake slithering quickly off the path.
We continued to be teased all the way by numerous krr-krr-krr-krriptic Bar-throated Apalises/apalii cursing us from within every second bush.

Many thanks to all those who attended and shared their valuable expertise and images. Thanks also to Laurenda van Breda, Environmental Education and Research Officer at UWC who facilitated our visit to the reserve.