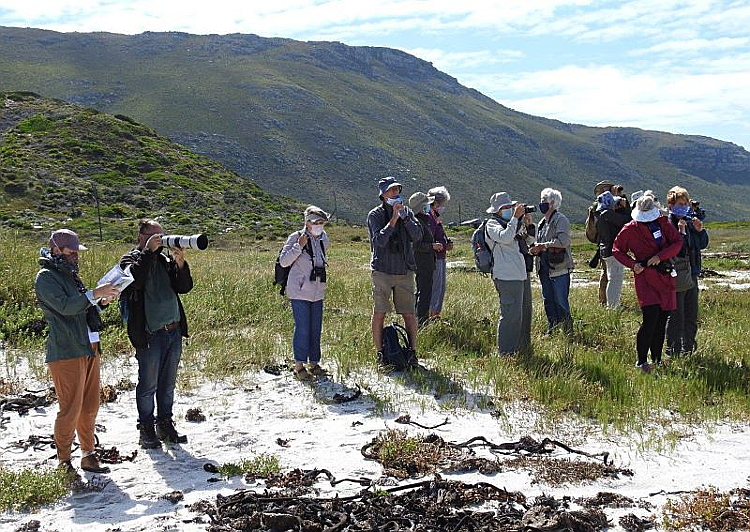 Following last year’s successful visit to the Soetwater Enviro Centre, this year’s outing did not disappoint. The weather looked a bit ominous, but not too threatening, and we hoped the forecast “10 o’clock shower” would not make landfall.
We were greeted by a Jackal Buzzard patrolling the road where we started off at the Otter Pool parking area. After Lappies Labuschagne had welcomed the group and introduced Soetwater to us, we set off towards the rocky shore to spot some seabirds.
Sacred Ibis, Common Starling and Speckled Pigeons were going about their business, and we were soon able to tick off the most common coastal species, like Cape, White-breasted, and Crowned Cormorant, Hartlaub’s and Kelp Gulls, Blacksmith Lapwing, African Oystercatcher, Egyptian Goose and Greater Crested Tern. Cape Wagtails patrolled the water’s edge, while a Little Egret fossicked among the rocks. We were happy to spot some White-fronted Plovers, which are now becoming a far less common sight along our shores, as well as some Common Whimbrel.
While returning to our cars we also caught sight of some other “bush birds” like Levaillant’s Cisticola, Karoo Prinia and Bokmakierie, with a Cape Grassbird’s calling giving away its presence. Way out beyond the breakers, Gillian spotted White-chinned Petrel, while Rock Martin and a Barn Swallow swooped around us. Visibility was too poor for spotting other Pelagics.

We proceeded to the Enviro Centre where we spotted more Red-winged Starlings, Speckled Pigeons, as well as Fiscal Flycatchers. On the shore we saw a roost of terns – mostly Common, with a couple of Sandwich and Greater Crested Terns in the mix and there were also Hadedas and more Whimbrels, Sacred Ibis and Egyptian Geese.

While heading towards the lighthouse we did some more bush birding, adding Common Fiscal, Cape Sparrow, Cape Robin-chat, Cape Bulbul, Fork-tailed Drongo, Brimstone Canary and Southern Bou-bou.
By this time the clouds to the North West looked rather ominous, so we advanced more briskly, spurred on by some light precipitation, towards the Milkwoods at the northern end of the campsite. Here we took shelter while we enjoyed our tea.

Southern Double-collared Sunbirds, Speckled and Red-faced Mousebirds put in an appearance before we headed back to our cars under clearing skies. A Grey Heron flew in from the north, followed by a Black-headed Heron giving us a fly-by from the South.
We were delighted to catch sight of a pair of Spotted Thick-knees and passed them at a respectable distance, so as not to disturb them.

Our final tally for the morning was a respectable 47 species, one less than last year. We look forward to a return visit to this special little gem on the Peninsula coast. 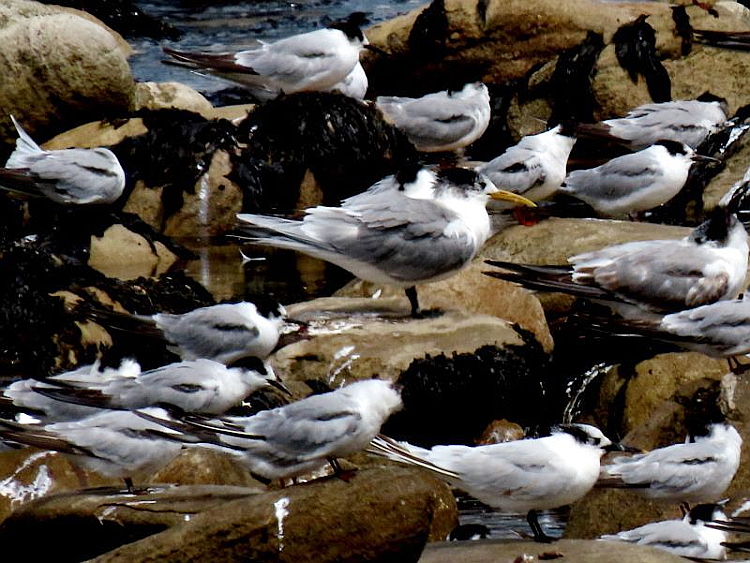 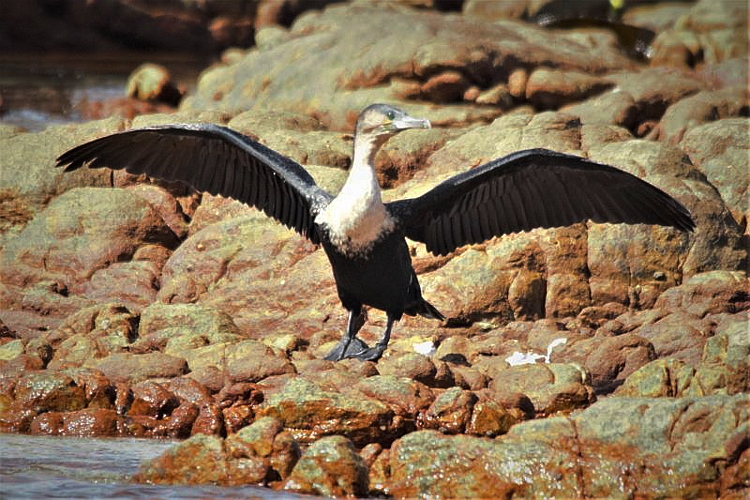 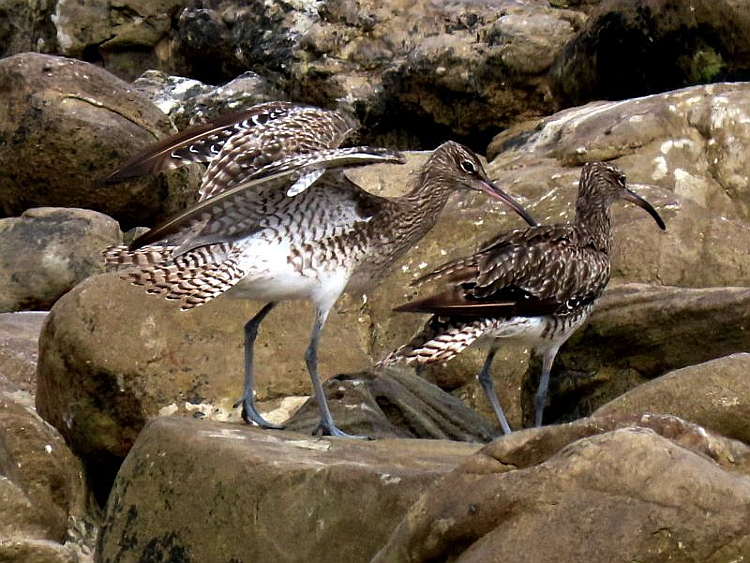 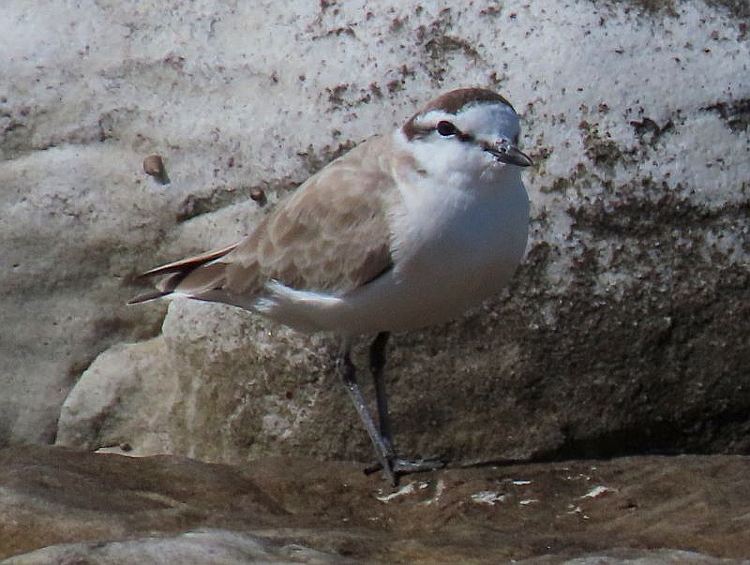 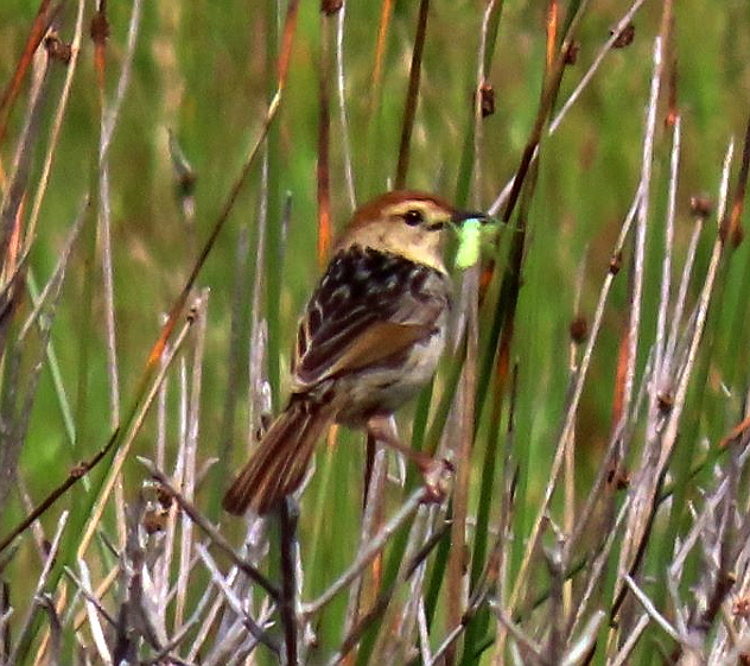 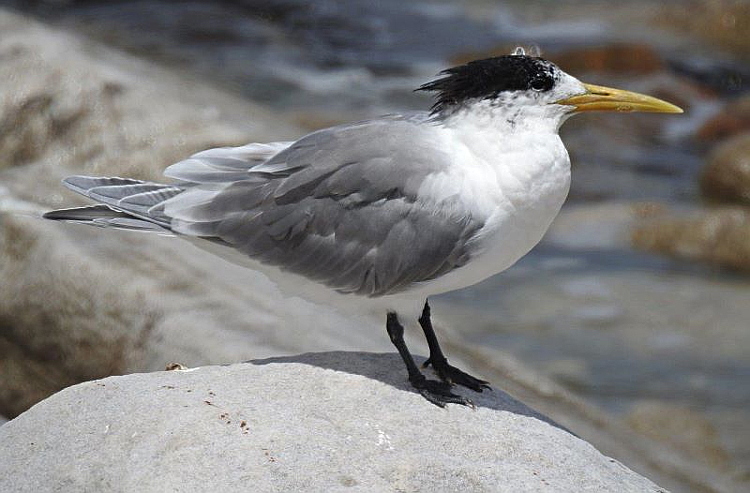 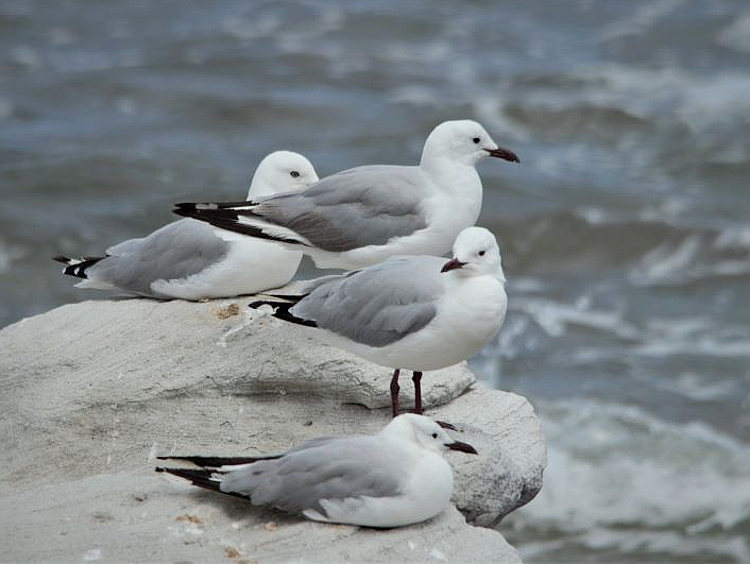 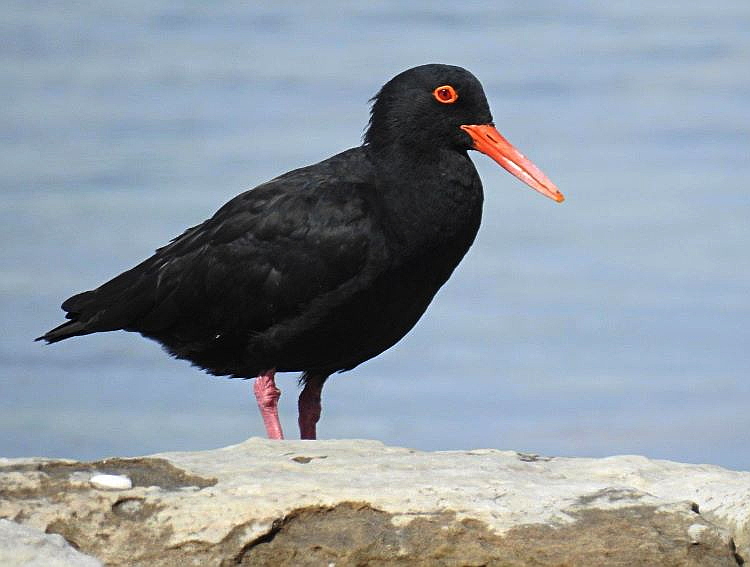 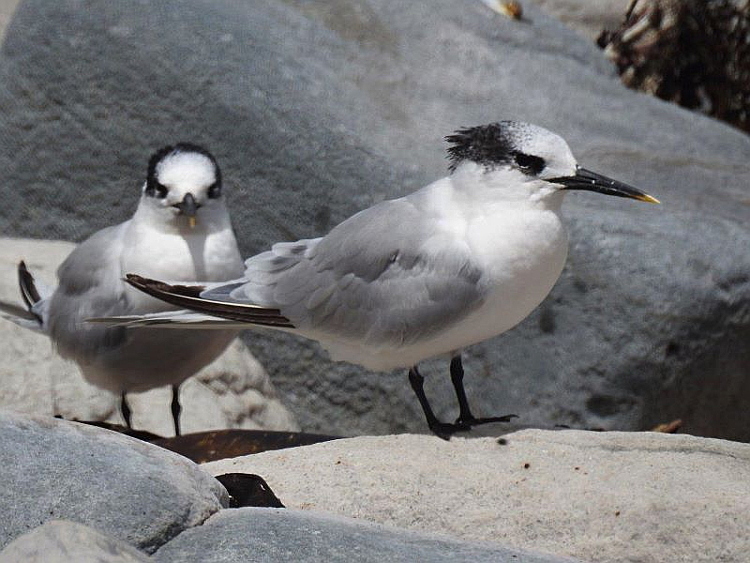 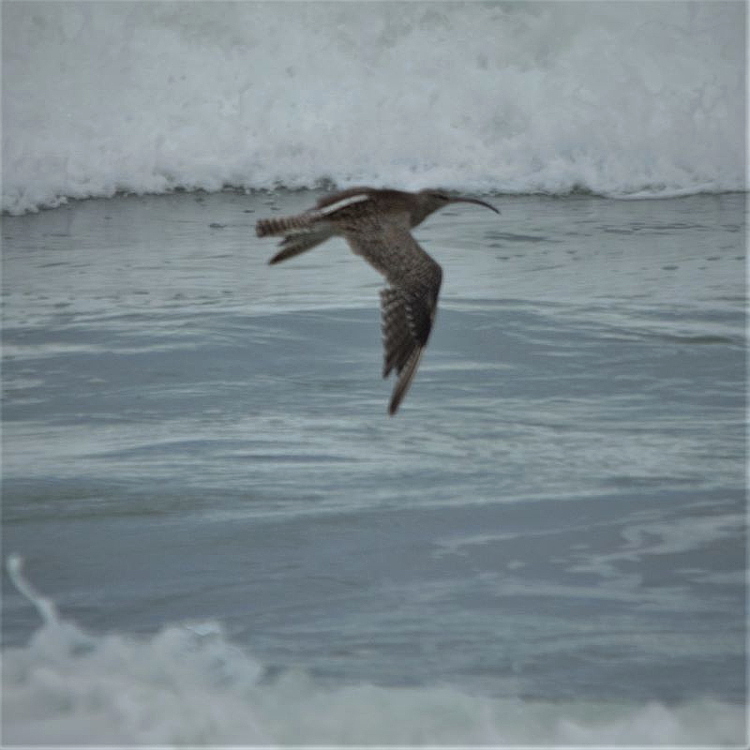 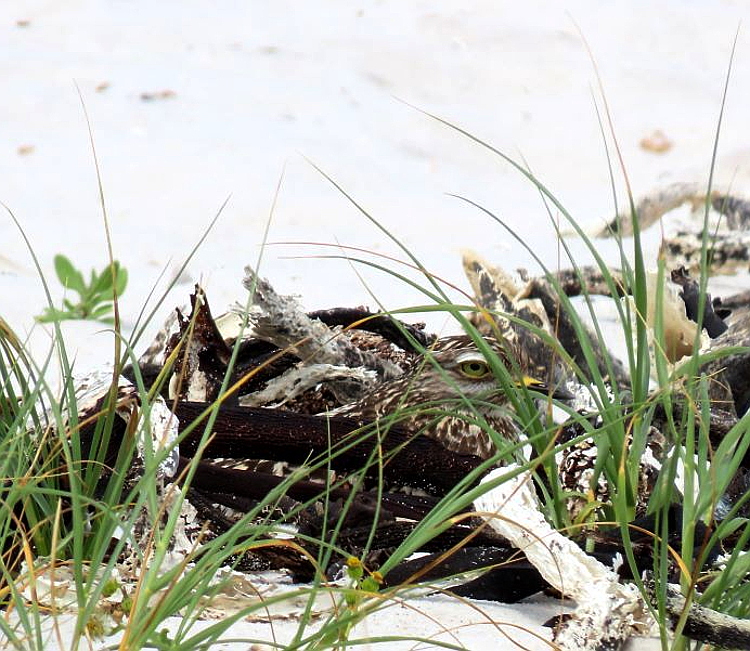 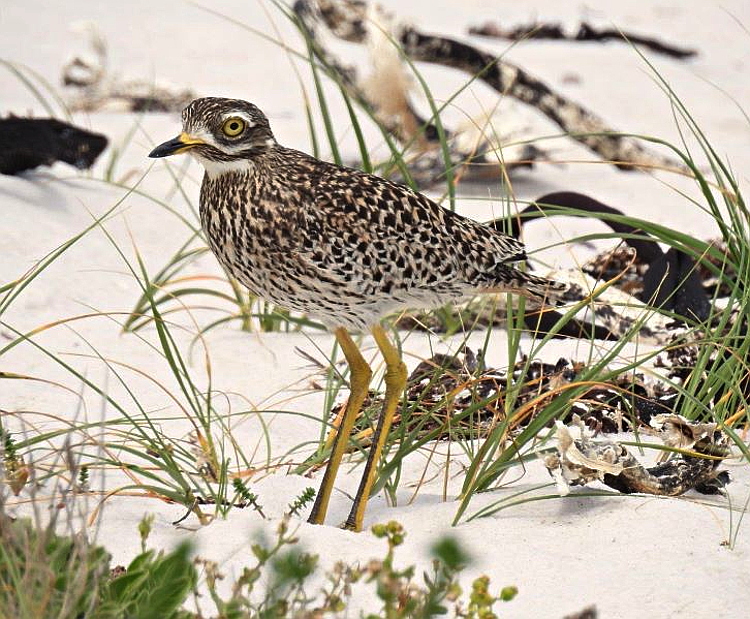 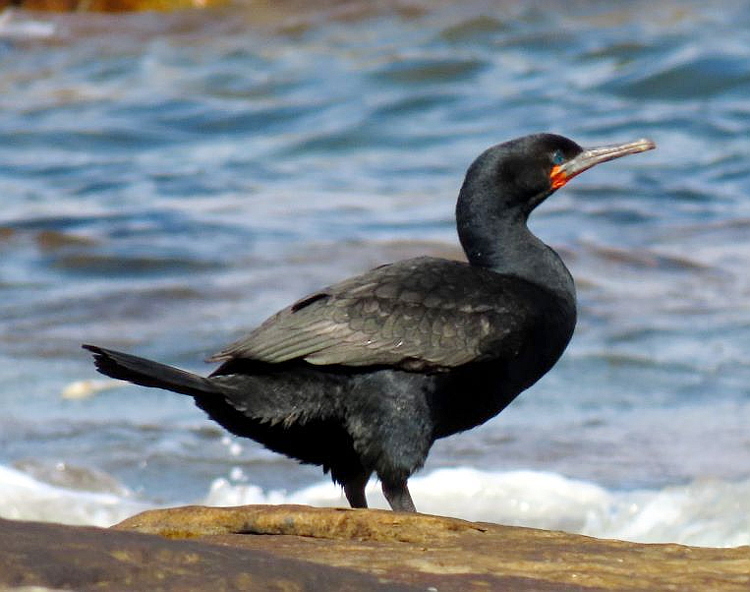