Outing to the Ganzekraal Nature Reserve. 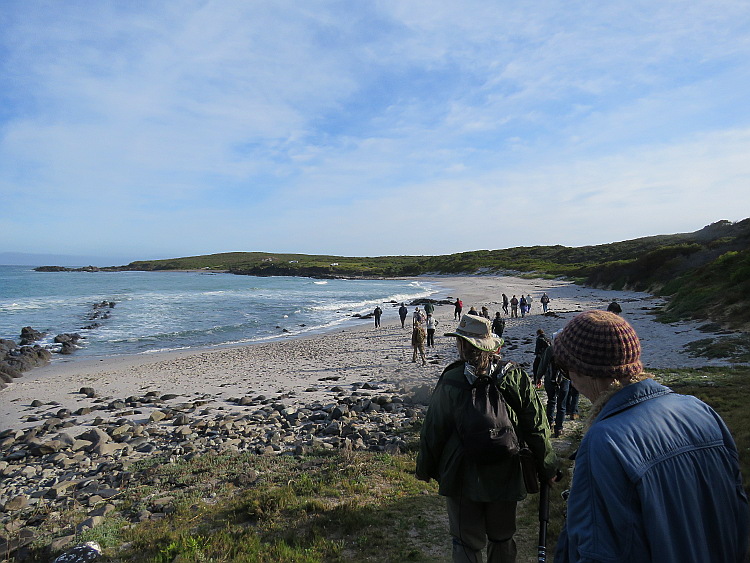 Last year’s outing to Ganzekraal was cancelled because of bad weather, but this year we had a beautiful, sunny spring day once the fog on the R27 had cleared. As we approached the gate to Ganzekraal Resort, we were treated to wonderful sightings of two male Southern Black Korhaans very close to the road – a good start to a fruitful day’s birding.

While the CBC members were moving their cars and congregating, some got good views of a Black Harrier. There was an excellent turn-out of 35 people as we gathered soon after 8 a.m. for a briefing by Felicity. We began by walking along a wooden boardwalk and steps down to a short, pretty beach and a very blue sea.

Unfortunately, the beach could not be described as ‘pristine’ because of the amount of litter, especially brightly coloured fishing line which was tangled in the kelp. Felicity had brought along plastic bags and she had suggested before we had set out that we collect litter on our way back – after all, the day before had been International Marine Clean-up Day.

Once on the sandy jeep track, we continued along a route which overlooked the rocky shore. There was abundant evidence of spring flowers – not yet open – on the side of the road and the ‘middelmannetjie’. Other evidence of spring was the very noisy and active Bar-throated Apalis and Karoo Scrub Robin (‘Scrobin’), with dozens of sightings of both species. We also had many good sightings of Grey-backed Cisticola, described aptly by John Magner as a ‘washed-out Levaillant’s Cisticola’.

Other good sightings in the strandveld included a Layard’s Warbler (Layard’s Tit-Babbler) and Chestnut-vented Warbler (Tit-Babbler) within minutes of each other. Two views of a Long-billed Crombec and then a Yellow-bellied Eremomela were enjoyed fleetingly by some. Cape Robin-Chat, Cape Bunting and Southern Double-collared Sunbird were also welcome additions. On the other side of the scale to those mostly diminutive birds, a whale was spotted in the sea not far from us.

From the jeep track we enjoyed views of a very dramatic coastline, including blackish rocks, some in the shape of a fort. A strip of rocks formed an inlet which produced a Grey Heron, a pair of African Oystercatchers and Crowned Cormorant. After two hours’ walking, we reached a wire fence and had got as far as we could go. We stopped here to watch some Pearl-breasted Swallows, before turning back.

The return trip was a bit quicker, with less time spent birding, but we enjoyed looking at the flowers, which were all open by now and were a beautiful splash of colour. The botanists in the group shared their knowledge and told us the names of many of the plants, including some unusual and interesting bulbs.

Returning to the beach at the end of the walk, the group picked up litter, filling many bags in the process. A great idea and worth doing whenever we can!

We then gathered near the car park for tea and snacks, while checking our bird list. We had a total of 48 species. Everyone was very enthusiastic about what was an exciting new destination for many of the group. This was definitely an outing to be repeated. Thanks to Felicity and Linda Hibbin for the two ‘reccies’ done to prepare for a most enjoyable and productive walk!