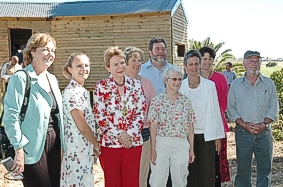 On a hot sunny morning on 26 November 2008, the official opening of the bird hides at the Two Rivers Urban Park (TRUP) took place.
The Mayor of Cape Town, Helen Zille together with Chairman of the TRUP Committee, Councilor Owen Kinahan performed the opening ceremony in the Observatory grounds at the confluence of the Liesbeek and Black Rivers. Councilor Kinahan introduced the Councilor Brian Watkyns, who is also part of the TRUP Committee. Mayor of Cape Town, Helen Zille did the official door opening.

About 50 people heard how the planning and implementation has taken about 10 years to bring this Park into existence. The City’s Nature Conservation dept were thanked for the work they do.
A number of the audience were CBC members along with the CBC Conservation Committee who have long lobbied for this Park Area to receive conservation status.
A visitors book was signed by those present. Maya Beukes Conservation Manager for the area  explained the importance of the site to the Mayor.
Dave Whitelaw and Isabella Hayden Conservation Committee members and also part of the  TRUP Committee were present.