This was a course with a difference. It was the first major event of CBC’s Diamond Anniversary Year and was celebrated with the serving of gaily coloured cakes for tea and a “lucky draw” iced fruit cake sporting the “Diamond” logo.
Julie Snyders was the lucky winner. The floor was a hive of activity with memorabilia, raffle tickets, bird books and CD’s selling like hot cakes.

It was fitting in this 60th Anniversary Year that John Graham’s “60 Top Birds”, with stunning visuals and meticulous presentation, was in every sense a celebration also of the Birds of the Western Cape.
John identified the Western Cape Region as a birding hot spot, with a total list of 540 species. What made it so was the high level of endemism, easy access to good birding spots, and the diversity of habitat – the unique Fynbos biome, Succulent Karoo, Nama Karoo, Pelagic, Coastal Marine, Coastal Macchia and Afromontane forest. Added to this was the potential for picking up Vagrants and Rarities.
Within these categories, John introduced his top 60 birds, together with the “supporting cast”, their claim to fame, preferred habitat and where to see them. “Top Birds” were the sought after Endemics, Signature and Iconic species, Red Data species and Spectacular species, while “Supporting Cast” were birds that had a claim to fame in terms of one or other of these criteria but were widespread and commonly seen. Related bird calls, evocative of the Western Cape, were an added dimension to this presentation. As an aside, the top villains and introduced expats in the Western Cape scenario were also featured.

John Graham needed no introduction. He is an acknowledged expert on the birds of the region and he shared his knowledge with the 135 course attendees (full house) in a brilliant presentation with a wealth of information and world-class photography.

Thank you, John for a birding bonanza. 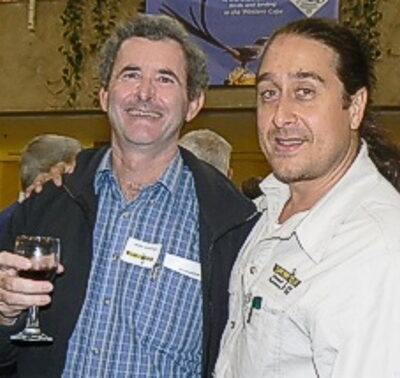