Celebrating 60 years of the Club, birds and birding in the Western Cape.

A special sub committee has been hard at work since early 2007 putting together and organising a programme and calendar of special events for members to enjoy in celebration of this milestone in the Club’s history.
We trust many members will actively take part in one or many of the events, not only to experience the different, new and varied birding options but share in the camaraderie on the social side.

APRIL
Saturday 12th   –   Half Day ID Course.
John Graham’s – ‘Top 60 Birds in the Western Cape and Where to Find Them’.
An ID course that not only focuses on the birds, but also where best to find them. Presented by John Graham. Venue: UCT Lesley 3B Lecture Theatre 9am – 1pm.

Saturday 19th  –    Special Invited Diamond Lunch.
A ‘thank-you’ to All past and present Committees, Sub Committees, Helpers and Contributors to the Club over the Years.
Venue: Goedewacht Estate, Noordhoek. 12.30 for 1pm.

MAY CELEBRATES THE ACTUAL ANNIVERSARY MONTH

Commemorative Edition of Promerops.
A Special Diamond Edition of of the Club magazine, highlighting events, personalities and reflection on 60 years of the Club.

This was cancelled due to not enough numbers.

AUGUST
Saturday 2nd  –  Half Day Course, Mountain of the Sea.
A natural history of the Flora, Fauna and the Geology of Table Mountain presented by Anton Pauw.

Venue: UCT Lesley 3B Lecture Theatre. 9am – 1pm. Booking necessary, full details in May edition of Promerops.
Special Diamond Anniversary Snacks will be served at the tea/coffee break.

British BirdFair and Dutch Birding Festival
The Fund raising initiative for The Albatross Task Force with a raffle of Grey-headed Albatross painting by gifted, young, local artist Leon Fouché, goes ‘International’ at the British BirdFair, Rutland Water, and thereafter the following weekend to the Dutch Birding Fair in Lelystad, in an effort to add even more to the funds raised locally.

Mon 18th – Saturday 23rd Diamond Birding Camp, Dronfield, Kimberley.
Dronfield Nature Reserve is part of the ‘Diamond Birding Route’ and appropriately in our Diamond year, well worth a visit.
Situated 10 kms north of Kimberley, 11 000 hectares of pristine camel thorn tree savanna. At least 75 pairs of White-backed Vultures breed here, with viewing from a hide at the vulture restaurant. Along with a good bird list, several mammal species can also be seen. Whilst based at Dronfield we will visit other good birding habitats in the Kimberley area, including trips to find specials like Long-tailed and Kimberley Pipits, Bradfield’s Swift etc. plus a trip to Kamfers Dam.

SEPTEMBER
Sunday 7th  –   Special Outing to Delheim Wine Estate.
An day outing starting at 07h00 to help draw up the Estates first “official bird list”. Delheim have championed a biodiversity and conservation ethic along with making wine. They are a founder member of the Klapmutskop Conservancy. They are on the Simonsberg just off the R44 road.

OCTOBER
Thursday 9th  –   Draw for the Winners of the Albatross Task Force Raffle takes place at the Club evening meeting.

Friday 10th – Monday 13th  Diamond Birding Camp. Red Stone Hills, Calitzdorp.
A private farm situated between Oudtshoorn and Calizdorp at the foot of the Swartberg. With an impressive list of 195 species with 144 recorded breeding, some of the specials include: Gabar Goshawk, Tambourine Dove, Cape Eagle Owl, Rufous-cheeked Nightjar and the only reported record of Dusky Indigobird for the Western Cape.

A birding competition for Teams to compete for prizes to see the most species in 24 hours, plus prizes for any rarities seen, all within the confines of the West Coast National Park. Accommodation for 2 nights will be in the park.

See Mel’s wrap-up of the event
Drinks, pizzas, quiz, raffle prizes plus a special presentation reviewing some of the Anniversary year’s events.
Full details to be published in November Promerops.

MEMORABILIA
Several items of memorabilia have been specially produced in celebration. These will be available for sale at all of the special events on the calendar plus at other club meetings throughout the year.
Birders Car Decal
50cm x 5cm rear window decal, carrying the 60th Diamond logo plus text ‘Birdwatching – Prone to Sudden Stops’ – R10.00 each
Bush Shirts, Bush Hats, Beanies.

CONSERVATION DIAMOND FUND RAISER
There are many conservation projects deserving of funding, but rather than dilute the effort and the proceeds raised across several projects, the Committee has decided that all proceeds raised throughout the year will go to one project, The Albatross Task Force which is part of BirdLife South Africa’s Marine and Sea Bird Programme.
The Albatross Task Force is currently doing good work (as those members that attended Miedad Goren’s talk in August will attest to) not only at sea with the fisheries, but also on land to develop strategies and actions both practical and educational to mitigate the appalling loss of birds. Not only Albatross species, but Petrels, Shearwaters and other sea creatures like sharks and turtles, suffer due to current fishing practices.
In Southern African waters alone, last year it was estimated 34 000 seabirds are killed annually off Namibia, Angola and the west coast of South Africa.
An estimated 18,000 seabirds are killed every year as a result of interacting with bottom trawl operation fisheries in SA, 3 000 – 5 000 are killed in the SA pelagic longline fishery and 300 in the hake longline fishery all as so called “by catch”.
21 of the 23 species of Albatross are threatened with extinction should these practices be allowed to continue throughout the world.
Cape Town is now an international venue and springboard to some of the best boat based Pelagic Sea Bird watching, and the Club believes The Albatross Task Force is one of the most important conservation issues in our part of the world needing additional support and funding. Tragically, the carnage has mostly gone unnoticed, being out there, out at sea, out of sight until now.
How are we going to raise Funds?

A young and gifted, local bird artist, Leon Fouchè has been commissioned to produce a painting featuring and dramatising the Grey-headed Albatross.

The original painting will be;

First Prize of the Raffle   (sponsored by Clubs of the Western Province Deep Sea Anglers Association.)

Second Prize is a DOUBLE ticket for a Pelagic out of Cape Town.  (sponsored by Cape Town Pelagics.)

Third Prize is a SINGLE ticket for a Pelagic out of Cape Town.  (sponsored by Anne Albatross Pelagics.)

Sale of Limited Edition prints will also be used to raise funds. All proceeds go to the Albatross Task Force.
Not only will the Club be raising funds at home for this, but a bold initiative will be undertaken to raise funds in the UK,
principally at the 2008 British BirdFair at Rutland Water, followed by the Dutch Birding Festival at Lelystad in August.

We anticipate and have targeted to raise R 100 000 and trust members will embrace and support this throughout the year. 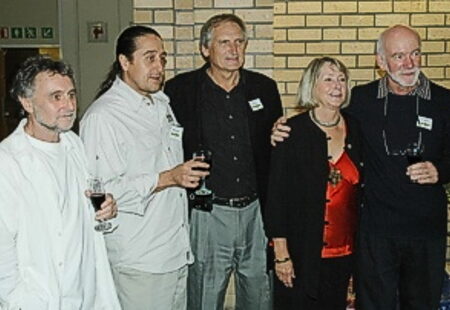