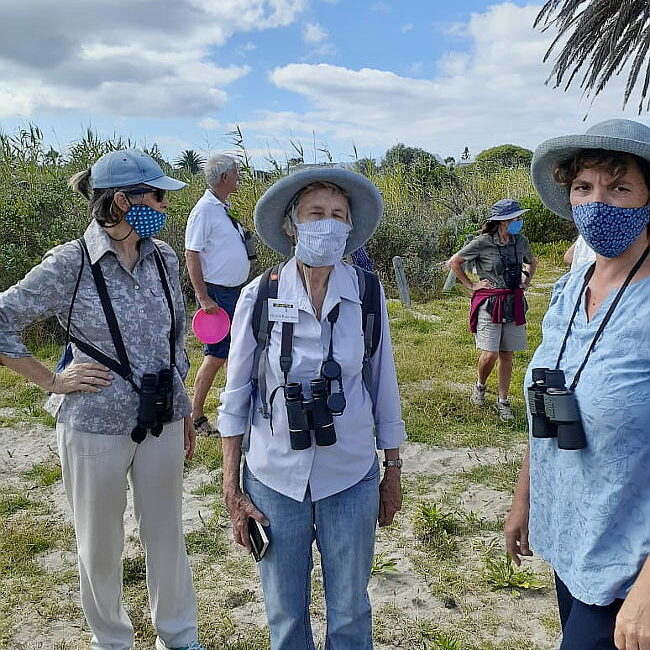 As in previous years, the management of Zandvlei Nature Reserve arranged for us to gain access to the Reserve on the Sunday, as the Reserve is normally closed over the weekends.

Everyone started arriving from 07h45 and by 08h00 we had 23 members and were ready to begin the outing, leaving the vehicles under the supervision of a Park Ranger. The days leading up to Sunday had been extremely hot but the day started with a hint of drizzle and remained overcast for most of the morning which made for very pleasant birding conditions.

Before leaving the car park we listed quite a few birds including Black-winged Kite, African Black and Alpine Swifts and Greater-striped, Barn and White-throated Swallows.

Next stop was the Lookout at the end of the Vlei itself and this proved very productive as far as the water birds were concerned and produced a fair number of the species seen on the walk.
Some of those seen were Caspian Tern, Common Tern, Red-knobbed Coot, Great-crested Grebe (with two chicks) Cape Teal, Reed Cormorant, Yellow-billed Duck, Kelp Gull, Little Grebe and Little Egret (of which we saw several on the edge of the Vlei)
The water’s edge also produced a few more birds, one of the more interesting being a couple of Three-banded Plovers.

We then headed inland towards the Salt Marsh which was totally dry and deserted but did pick-up a few bush birds along the way including Pin-tailed Whydah, Southern Double-collared Sunbird, Common Waxbill, Karoo Prinia and Cape Spurfowl. The Central Pan was unfortunately almost totally dry and without any birdlife and so for the remainder of the walk we saw very few birds other than a few more bush birds.

Most of the birders then got together in the shady area near the car park and enjoyed their refreshments. The morning’s species list was read out by John Magner, who had kept the list during the walk, and to the surprise of many the final tally was 50 which included an African Fish Eagle heard calling whilst the list was being read! Thereafter an African Pipit and Southern Fiscal were seen bringing the final total for the day to 52.

This was a first visit to Zandvlei Nature Reserve for a few of the members but everyone appeared to enjoy the outing and it was a successful morning despite the lack of water in the Pans.
One of the ladies very aptly referred to the walk as a “Mole hole-hopping exercise!” as parts of the track have been undermined and care is needed when walking. The actual pathway has been well cleared and the timber on the bridges and boardwalk has all been replaced and is in perfect condition.