Outing to Rooi Els and the Harold Porter Botanical Gardens. 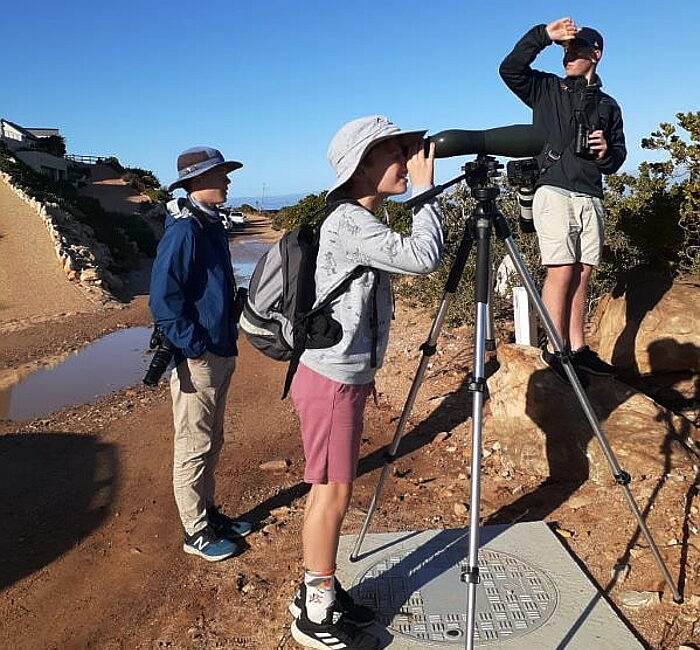 Two of our young birders share their experiences of this outing.

An early morning start saw us heading off to Rooi Els to meet up with the CBC.
Along Clarence Drive we came across baboons on the road as well as a Cape Rock Thrush sitting quietly on a rock. When we arrived, we saw Penny and Mike Buckham looking through a scope out to sea. They were looking at a Shy Albatross. Mike let me look through his scope and I saw it flying over the sea as well as a Sooty Shearwater. The day had just started and I had already seen two lifers.

We were starting the walk down the track when a Sentinel Rock Thrush jumped up on to a rock beside us and posed nicely.

We carried on looking for the Cape Rockjumper that we could hear. After some scanning, I saw one through a scope: lifer number 3. After that, lots of Rockjumpers started to appear, some even getting close enough so that I could get a photo of them.

There were Ground Woodpeckers calling but we never got to see them. Other birds that I enjoyed seeing were Orange-breasted Sunbird, Familiar Chat and Cape Bunting. We then headed off to the next destination.

Our next destination was Harold Porter Botanical Gardens, which I was very excited about. Before we started birding, we had a picnic on the lawns while hundreds of Red-winged flew over.
Since it was my first time at the gardens, I decided to explore a bit. I came across a very noisy Streaky-headed Seedeater sitting on the top of a tree. I was happy to hear a very familiar sound, “Meitjie” – a Klaas’s Cuckoo. I found the tree it was calling from but sadly, after lots of searching, I saw nothing.

The group met up again and walked up to Disa Kloof. On our way up, we came across a pair of Cape Bulbul, all fluffed up, as well as a friendly Fiscal Flycatcher. At the first bridge, I was happy to get nice views of a Cape Siskin whilst the river was roaring.

We entered the forests, which I was most excited about. While walking up the valley, we scanned the river for African Black Duck and the trees for forest species. Then we came across a group of people looking at something. They were looking at the bird I wanted to see most: the Blue-mantled Crested Flycatcher. The bird never sat still, but after sometime I got a picture of it – my fourth lifer.

Then a pair of Cape Batis decided to join us and they also did not sit still. We continued to the top of the walking trail, not seeing anything, but I was happy to see the waterfall. We walked back down to the parking lot. On the way, I decided to check a little forest in the gardens. I saw a cute little African Dusky Flycatcher and a male Cape Batis that were both very friendly. We said our goodbyes at the parking lot and headed towards home.

Penny had sent us a pin for a place where she had seen a Victorin’s Warbler earlier that day, thanks to Mike Buckham’s help. We stopped on the side of the road near Rooi Els, which is where it had been seen. There was a gully on the side of the road, filled with thick vegetation. This is where it must live. My friends searched the mountainside for it, whilst I searched the gully. After some false sightings, I saw it jumping through the vegetation.

I called everyone to the spot and after some searching, everyone had seen it, my fifth and last lifer of the day. The Warbler jumped onto a bush, in the sun, for a second and I managed to get a good view of it. Just before we left, it flitted onto a bush and I managed to get a photo of it but it was a blur. We headed home, after seeing five lifers. It was an amazing trip.

The outing on 21 August 2022 was incredible! We started off at Rooi Els in the morning where we split into two groups as there were a large number of birders who participated. The weather was chilly and windy and there were not that many birds out and about when we started our walk. Some highlights for me on this walk were seeing the Shy Albatross, Grey-backed Cisticola and Cape Rockjumper.
We then drove to the Harold Porter National Botanical Gardens in Betty’s Bay where we had a quick picnic just outside the entrance and then took a walk up to the waterfall. There were sightings of Klaas’s Cuckoo, Streaky-headed Seedeater, Blue-mantled Crested Flycatcher and Cape Batis, amongst others.

The best sighting of the day for me occurred on the road between Rooi Els and Pringle Bay. We had been informed that the Victorin’s Warbler was around and, after receiving the location from Aunty Penny, a group of us scoured the roadway and mountainside looking for the elusive bird. I climbed nearly halfway up the mountain following a call, but only got a really good look at one hopping on the ground in the brush near the roadway.

All in all, I got four lifers that day! In order of preference, they were: Victorin’s Warbler, Shy Albatross, Klaas’s Cuckoo and Grey-backed Cisticola. Overall, it was one of the best birding days of my life!

Thanks very much to John Magner, who led this very enjoyable outing, and to Phil Green, Daryl de Beer and Penny Dichmont who contributed their photographs for this report.