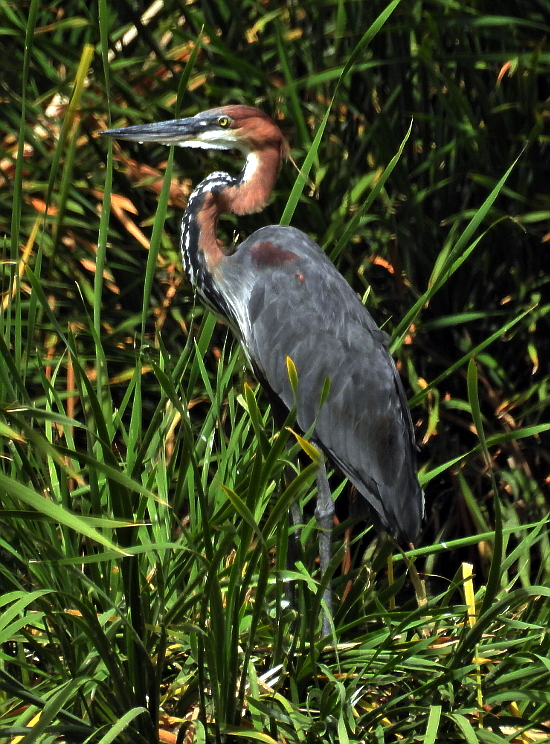 The monthly bird count on October 27th took place on the hottest day of the year so far – topping 37 degrees by midday – and our regular meeting place has now been moved below the viewing platform opposite Pan E2 to provide extra shade and cover.

It was here that the faithful bird counters gathered at ten o’clock after our October count to enjoy a splendid “Breakfast” spread provided by the Drakenstein Municipality. The Paarl Bird Sanctuary was officially proclaimed 25 years ago, so this was a celebratory occasion as well as an opportunity to thank Yvonne and the bird monitoring group for their work since the monthly bird counts started in 1994.
Most of the regular bird counters were present, as well as Tony Williams who was a member of the PBS Advisory Board in the earliest days and is now working to summarise the results of twenty years of bird counts, and Felicity Ellmore who has been ringing birds at the sanctuary for many years. It was also good of our staunch supporter, Ronald Brown (Manager, Wastewater Services) and the recently appointed Senior Supervisor, Jurie Jumart, to join us on a Saturday morning.
In the photos taken by John Fincham are Felicity Andrea Weiss, Ronald Brown, Sharon Montgomery, Tony Williams, Felicity Ellmore, Patsy Copeland, Rita Meyer, Louis Hugo, Jo Hobbs, Elsa van der Merwe, Yvonne Weiss and some security staff joined us as well.

A series of poses by a Levaillant’s Cisticola in breeding plumage brightened the count today.

Despite the weather,  there are a lot of Pochard, Maccoa, Black Duck and White-faced Duck. Hottentot Teal, Fulvous Duck and White-backed Duck were also seen.
A group of 41 Three-banded Plovers was on the berm between E2 & E3 pans.
The Grey-headed Gulls are nesting.

28 July 2018 – The monthly count took place this morning. It was a beautiful day. Some photos are attached.

photographs and report by John Fincham.

The main highlight was a Goliath Heron on A pan. There were 7 African Black Duck on C pan, a pair on B pan, and a pair on the adjacent Berg River.

Other highlights were a pair of Gymnogene, a Little Bittern in flight, Hottentot Teal, Black Crake, several Purple Gallinule and White-winged Terns changing to breeding plumage.

photographs and report by John Fincham.