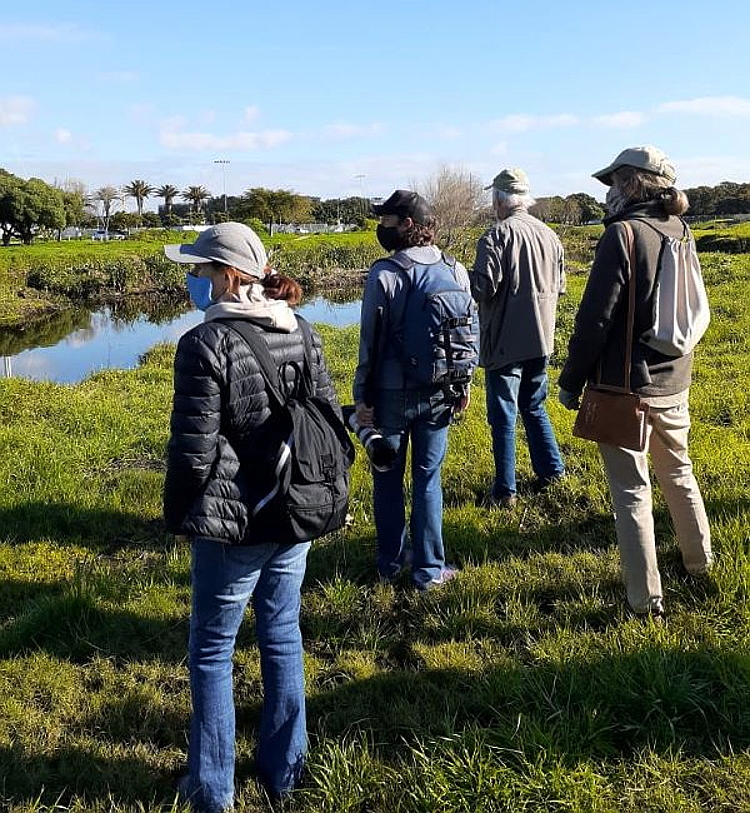 25 eager birders met at the parking area below the Wild Fig Restaurant in Observatory at 9am on Wednesday, 11th August for the mid-week outing along the lower Liesbeek River. It was a slightly cool but otherwise ideal, calm, sunny morning as we headed along the raised gravel path towards the river, with the temporary wetland, full after the good winter rains, on our right.

The first birds of note were a calling pair of Levaillant’s Cisticolas, soon followed by the first of several perched Southern Fiscals on the lookout for prey. As we turned right to follow the river, a pair of African Black Duck flew by. A Giant Kingfisher heading upstream flashed by, but was sadly missed by many of the group. Both Lesser Swamp and Little Rush warblers were heard and occasionally gave brief glimpses in the thick wetland vegetation, and Yellow-billed Duck, Red-billed Teal and Common Moorhen were seen on the river which had fortunately been recently cleared of the thick masses of parrot feather weed.

A brown raptor was spotted, gave good views and was photographed by the two main photographers in the group (Daryl de Beer and Jacque Smit), but even these images did not really allow for a positive identification and it was listed as a “Mystery” Buzzard, one of the brown buzzard conundrums frequently encountered on the Peninsula these days.

When we reached the active colony of Cape Weavers building their hanging nests quite close to the river bank, many Bronze Mannikins were observed feeding along the water’s edge. We had earlier seen a few single birds in the wetland. This introduced species is rapidly establishing itself on the northern Peninsula.

We witnessed an interesting aerial interaction between an African Sacred Ibis which was being hassled by a pair of Pied Crows and eventually relieved of its meal. The action was captured on camera by Jacque Smit and the “prey” could be positively identified from the photographs as a chicken leg.

We carefully checked the Hartlaub’s Gulls on a small island in the river near the weir hoping to find a Grey-headed Gull amongst them, but without success. We did however have a good sighting of a single African Black Duck, and its altercations with a single Yellow-billed Duck – both species usually seen as pairs – implied that they might both be nesting in the dense vegetation on the centre island.

From here we walked across to the Astronomical Observatory where we were signed in by security and then walked down the road to the bird hide overlooking the temporary wetland. Singing Cape Canaries showed well on the way down, and the tops of the heads of Helmeted Guineafowl and Cape Spurfowl just protruded above the long lush grass. The group that walked left of the hide down towards the main river found a group of 10 or more White-faced Whistling Ducks, several of which flushed giving views to those of us in the hide. A further highlight for the group near the river was a brief but clear view of a Burchell’s Coucal, quite an uncommon sight on the Peninsula these days. A few other species such as Little Grebe and Cape Shoveler were added at the hide before we walked back down the road towards the Observatory entrance.

In the tall eucalyptus trees to our right an adult Black Sparrowhawk (the black & white form) was spotted and everyone enjoyed good views until it eventually flew. Almost immediately Priscilla spotted another Black Sparrowhawk, a juvenile, in an adjacent tree, and this one also obliged with good views. A pair of Amethyst Sunbirds was also added to the tick-list before we retraced our steps along the river.

It had been a good outing, but there was another highlight to come in the form of a perched female Giant Kingfisher. It sat for a while and then flew up into a tree in good light providing the photographers with some good shots. We had hoped for a Malachite Kingfisher on the outing, but the Giant was certainly the “cherry on the top”.

Back at the cars the tick-list for the morning was roughly consolidated, and the outing ended at about 12h30, somewhat later than the norm, and that without a tea-break.

It had been a very enjoyable and productive morning, and the final total – including the Jackal Buzzard spotted by Penny Dichmont and Linda Merrett as they chatted after everyone else had left – brought the morning’s total to a very healthy 47 species.