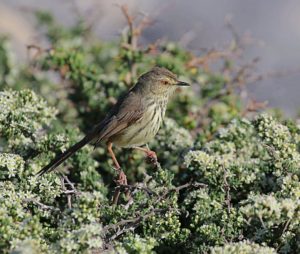 The day dawned clear and chilly but fortunately there was no wind when twenty birders gathered at the Wildevoëlvlei Waste Water Treatment Works at 8.30 am. We parked on the track at the end closest to Imhoff and walked the short distance to the first of 6 pans. These are not very large and visibility is usually fairly good.

The pans are separated by grassy banks edged with reeds and usually teem with a variety of water birds but on the day of the outing most of the ducks must have decided to be on the other side of the fence in an area that is mostly inaccessible and covered in alien vegetation. Even the normally most numerous resident, the Hartlaubs Gull, was not so abundant but good sightings were seen of two Grey-headed Gulls.

Yellow-billed Ducks, Cape Teal and Cape Shoveler were the only species of duck present and Little Grebes were seen on five of the pans. Water Thickknee, Black-winged Stilt, Western Cattle Egret, Grey Heron, Egyptian Goose, Sacred Ibis, Reed Cormorant, Three-banded Plover, Red-knobbed Coot and Common Moorhen were also seen. One of the pair of African Fish Eagles was sitting on a dying Port Jackson watching the passing parade before flying off towards Kommetjie. The only other raptor seen was a Black-winged Kite sitting patiently looking for brunch to scurry past.

A good variety of smaller birds that live in and around the reeds and other vegetation were seen as well: Blacksmith Lapwing, Lesser Swamp and Little Rush Warbler, Common Fiscal, Levaillant’s Cisticola and Cape Weaver whilst two Barn Swallows were a welcome surprise.

After leaving Wildevoëlvlei, we made our way to Kommetjie and parked at the boat launch beach. Once everyone had gathered, we spotted some terns, mainly Greater Crested, a few African Oystercatchers, Kelp and Hartlaubs gulls and White-breasted, Cape and Crowned Cormorants. The only birds on the beach were Sacred and Hadeda Ibis, Cape Wagtails and Western Cattle Egrets.

A stroll around what is called Bird Island (not an island anymore) did not yield the usual bush birds but we did see a nesting pair of Spotted Thickknees and had a good sighting of a Peregrine Falcon flying overhead. There were also some Rock Martins and Little Swifts flying above.

Not everyone joined us on the new pathway around the Kom towards the lighthouse but rather enjoyed the excellent sunny weather and views from the comfort of benches along the walkway. The aloes are in full bloom, attracting many Southern Double-collared and Malachite Sunbirds as well as Cape Weavers. The only other birds seen were two Karoo Prinias, a Southern Fiscal and Southern Boubou.

Once back at the cars, some folk had to leave and the rest enjoyed their refreshments in the lovely sunshine. A most enjoyable morning’s birding, even though the birds were scarcer than usual.

A total of 51 species was seen or heard.