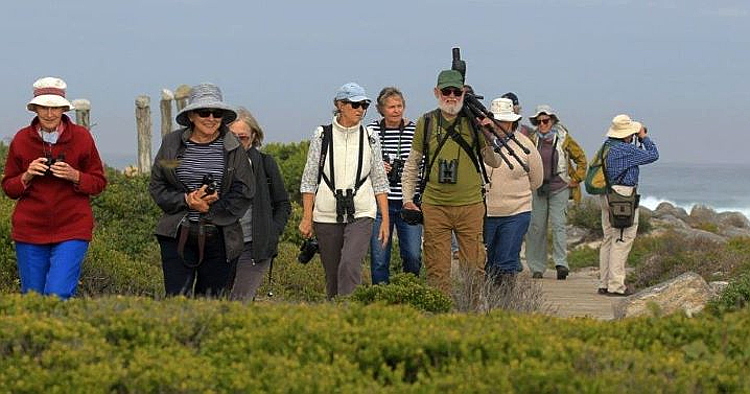 I was a bit nervous about this outing being in winter as my previous outing to the Clovelly Wetlands in summer had to be cancelled due to rain, but Thursday 2nd of June was as perfect a day as anyone could have wished for – cool and no wind with high clouds keeping the sun’s glare off the mirror-like settling ponds.

Marilyn Metcalf and I were joined by seventeen other keen birders, some old stalwarts, but it was good to welcome several new club members.

Wildevoëlvlei is where Marilyn and I, together with about 5 other regulars conduct a monthly count of the water birds. The count has been on-going since July 1985. Although it is a waste water treatment facility (sewage works), modern methods have almost eliminated the smell that one would expect.

The facility is on the southern edge of the Noordhoek / Wildevoëlvlei basin and the surrounding area on the other side of the fence comprises part of the Table Mountain National Park, the township of Masipumelele and the Wildevoëlvlei vleis, which drain into Chapman’s Bay at the southern end of Noordhoek beach.

There are six ponds and it is an easy stroll from one end to the other. Thirty nine species were spotted, including African Fish Eagle, Black Sparrowhawk, Water Thick-knee, Black-winged Stilt, Purple, Grey and Black-headed Herons, Southern Pochard, Spurwing and Egyptian Geese, Little Rush and Lesser-swamp Warblers. A big surprise was had when Lynette disturbed a pair of Spotted Eagle Owls in the middle of their morning nap.

After about an hour and a half we left for Kommetjie. We parked at the boat launch area next to the Kom and walked around the “island” looking out for sea and shore birds. By this time the clouds had disappeared and it had become rather warm.

Unfortunately the tide was out and it was quite a challenge to identify the Terns and Cormorants that were on the rocks closest to the sea. With the help of Dennis’s spotting scope we identified Crowned, Cape and White-breasted Cormorants and Greater Crested Terns.

As there was not much wind coming off the Atlantic Ocean the few ocean birds were too far away to identify. .

We sat on the rocks and enjoyed the sunshine whilst having tea and a snack whereafter a circuit of the island produced Bokmakierie, Spotted Thick-knee, Little Egret, African Oystercatcher and Bank Cormorant. We then walked along the path towards Slangkop Lighthouse. The aloes along the path were in full bloom and Malachite and Southern Double-collared Sunbirds were seen enjoying the flowers. A total of 53 species were seen / heard.

Many thanks to my co-leader, Marilyn, the participants and Dennis Laidler and Daryl and Lynette de Beer, who took the photographs, for a thoroughly enjoyable morning.