Outing to the Mount Royal Golf and Country Estate, Malmesbury. 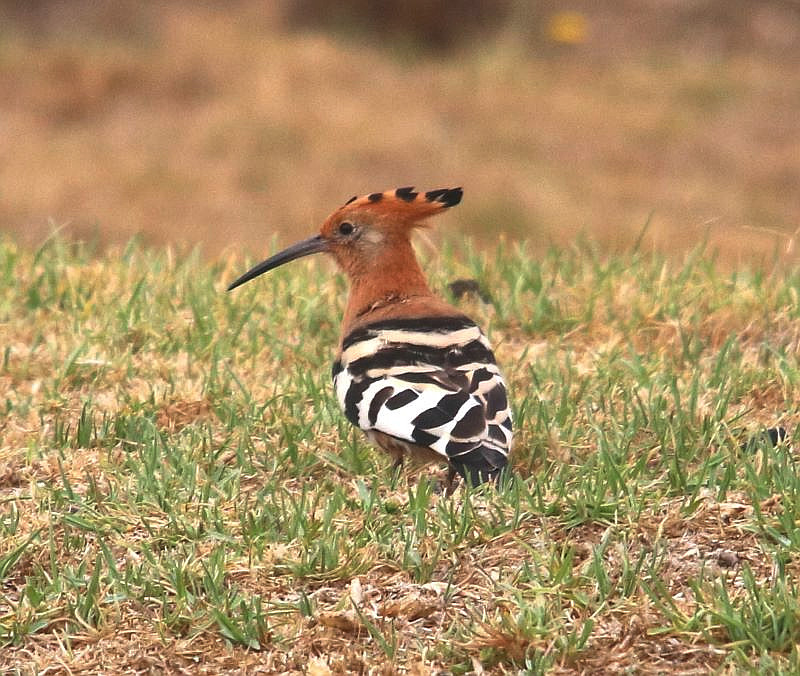 A group of 16 birders met outside the estate on a very overcast, drizzly, but fortunately wind free morning. As most of the birding was to be on foot, we managed to fit into four vehicles for the short journey to the main birding area, a wide strip of sloping, natural vegetation with a dam and wetlands between the housing estate and the perimeter fence, beyond which were vast wheat fields.

We took a twisty route, as on the recce the week before, Spotted Thick-knees had been seen close to the road, but no luck. On arriving at the dam where we parked, we were greeted by a pair of African Hoopoes feeding on the grass next to the dam, providing an excellent opportunity for the photographers. There were dozens of Southern Red Bishops in the reeds and trees around the dam and about 100 Helmeted Guineafowl in the field beyond. Other early sightings were mainly the more common, expected birds and by the time we had crossed the dam via a wooden bridge our tally was in the teens.

As it was still cool, we decided to turn right and walk uphill along the boundary road. A pair of Bokmakieries was duetting and many White-backed Mousebirds were seen. Other birds seen and heard in the next few hundred metres included Cape Robin Chats, Cape Sparrows, Karoo Prinia, Greater Striped Swallows, White-rumped Swift and African Sacred Ibis. We then returned to the dam via a meandering path through the vegetation, adding Fiscal Flycatcher, Southern Masked Weaver and others.

The weather had now become sunny and we continued downhill along the boundary road, seeing our first raptors, a Yellow-billed Kite and a pair of Jackal Buzzards. Numerous groups of Cape Canaries and Yellow Canaries were feeding and we also had good sightings of Karoo Scrub Robin, Chestnut-vented Warblers (Tit-babbler), African Stonechat and White-throated Canary. A Peregrine Falcon also made a brief but distant appearance and in the wetland Levaillant’s Cisticola and Yellow Bishop were seen.

On the uphill walk back to the vehicles on the other side of the wetland, we added Cape Spurfowl, Pied Starling, House Sparrow and Bar-throated Apalis. A welcome refreshment break was enjoyed on the grass overlooking the dam, after which we set off on a drive around the edge of the estate, through very dry wetlands and very dry Renosterveld, which yielded Pied Crow, Pin-tailed Whydah and Hadeda Ibis. At the top of a hill towards the wheat fields we saw Booted Eagle and Rock Kestrel and the final birds of the outing were Crowned Lapwings, seen on the return drive from the golf course car park.

48 species were seen on what was a very pleasant outing, made that much more special by being able to see and chat with friends again after some relaxation of the lockdown restrictions. My thanks to Daryl de Beer for helping me lead the outing and to everyone else who came and helped to make the morning so enjoyable.