Outing to the Majik Forest, Durbanville. 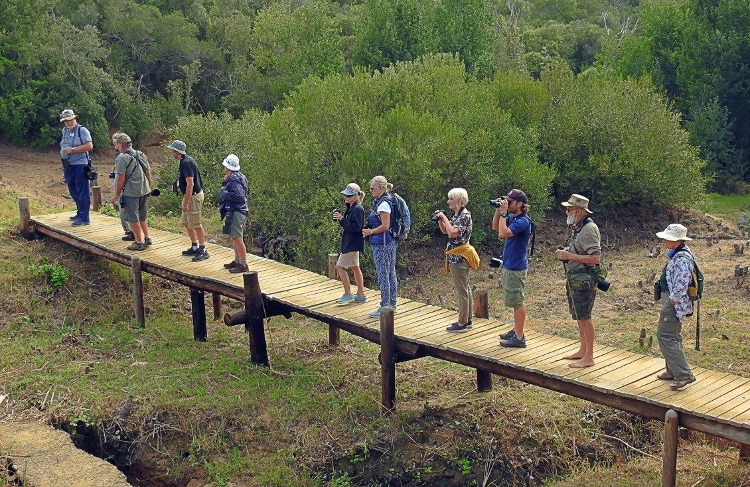 Challenging early morning traffic and limited parking aside, our visit to the Majik Forest in Bellville was most enjoyable. Moving this outing from a weekend event to a week day outing proved to be the right decision as we had the park to ourselves …… well almost!
Kevin Drummond-Hay of the Tygerberg Bird Club led our group through the beautiful park.

We began the walk in Vink’s Arboretum which is named after “Oom” Vink van Zyl, a resident in the area who, in the year 2000, planted the first three hundred trees on his own. He was passionate about trees and his ideal was to link the Arboretum and the Tygerberg Nature Reserve (another good birding spot) by means of a greenbelt. Since “Oom” Vink passed away in July 2005, Vink’s Greenbelt Association, a group of concerned residents, together with the Parks Division of CCT, helps to maintain the Arboretum on a voluntary basis. Wandering through the trees in the Arboretum we saw Southern Double-collared and Amethyst Sunbirds; Cape White-eyes; Bar-throated Apalis and we heard the Acacia Pied Barbet, but did not see it on this visit.

From here we headed to the two dams. Along the way we had to stop a number of times to identify the raptors flying overhead. These stops resulted in stiff necks and much discussion! Eventually it was agreed that the raptors seen on this outing were: Booted Eagle (Pale Morph); Jackal Buzzard; Black Sparrowhawk; Common Buzzard, Rock Kestrel … and … Yellow billed Kite.

The dams yielded: Black-crowned Night Heron; Lesser Swamp Warbler; African Darter and one of the highlights of the morning ….. a close, clear sighting of two African Black Ducks sitting on an overhanging branch offering a perfect photographic opportunity – and the cameras began to click!

We enjoyed our tea in the shade of the trees and tallied our species count which proved to be a satisfying 44. There were many positive comments from the 16 CBC members who enjoyed this outing.

Our thanks to Kevin Drummond-Hay for his enthusiasm and willingness to lead us through the Majik Forest.