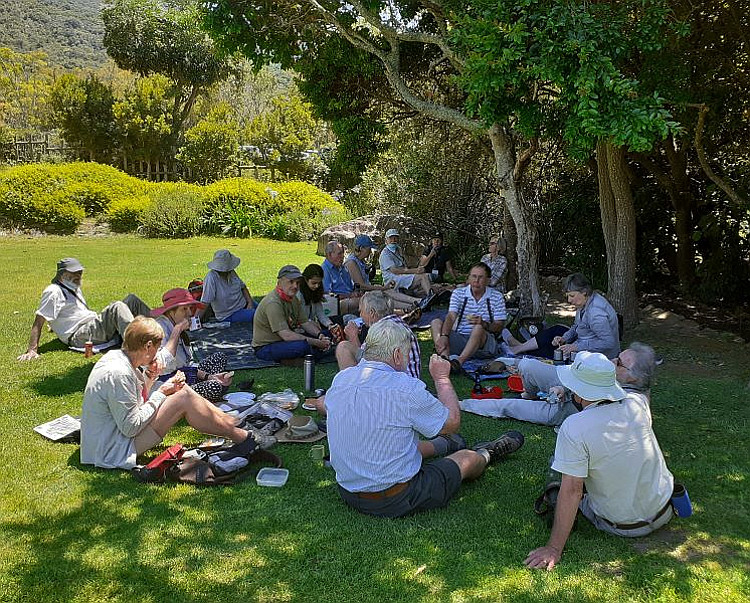 Perfect weather, no traffic and no crowds greeted 22 of us for the traditional end of year picnic at Kirstenbosch organised as usual by Margaret Maciver.
Margaret decreed that it would be a casual, chatty relaxed stroll with which we all concurred, and so it was.
However, no bird remained unidentified in the presence of the impressive coterie of ‘elder statesmen and women’ hunting them down, casually of course!
Feast your eyes on this list: John and Jane Magner, Otto and Sandy Schmitt, Graham Pringle, Peter and Nikki Nupen, Merle and Derek Chalton, plus welcome escapees from behind the ‘gordyn’, Brian and Dalene Vanderwalt. Daryl and Lynette de Beer were present but feel they are not yet ready for Elder Statesmanship. We were honoured to have the company of our Hon President Peter Steyn to keep the ‘youngsters’ on the right path. To assist the senior members, Zoe Lunau-Johns with her hawk eyes, and her Dad, came to help out with the spotting. Mel Tripp also popped in for the picnic.
The group fairly quickly descended into the usual ‘retreat from Moscow’ scenario with various chattees losing touch with H.Q; however, all ended up at the right place eventually.

The finale picnic was an enjoyable ‘chatfest’, even for those who forgot to bring their picnic- don’t ask!!
A passing raptor ignited the usual {yawn} Common, Mystery, Elgin, Steppe, Forest Buzzard argument (sorry, discussion). Otto did his Headmasterly thing and closed the subject.
Kirstenbosch does not allow chairs, so the services of two strong people were required to restore a number of the picnickers to the vertical.
The outing was a lovely end to a ‘not lovely’ year.
Happy Christmas and a Mask-free New Year.

P.S. Grand Finale: Our esteemed Chairlady lost her car keys, then Margaret lost her car!! All were safely gathered in eventually.