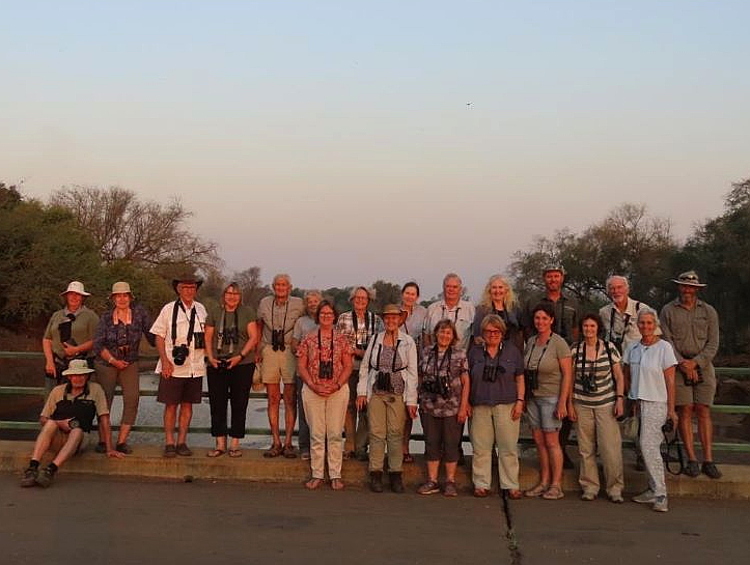 When an email was received in November 2021 inviting bird clubs to take advantage of a special offer to spend 3 nights at the EcoTraining camp in the Makuleke Concession I immediately booked the second last week-end in the list of dates made available. Jumping in head first without a life jacket, let alone a raft, is a risk that comes with a whole host of anxieties, the main one being would I be able to get 19 other people to join me on what sounded like a wonderful opportunity to visit an area of the northern Kruger Park that is closed to the casual visitor.

In the end all was well and 20 of us met up at Punda Maria on the 28th September prior to proceeding to Pafuri Gate where we were to leave our vehicles for the 3 nights at Makuleke.

Many thanks to Priscilla, Otto, Sandy, Peter, Nikki, Jerry, Val, Jenny, Jane, Joy, Kathy, Penny, Alison, Doug, Isabella, Angus, Frances, Ina and Gert for braving the long journey to experience a memorable few days in a wonderful part of our country. (The journey from Cape Town the preceeding week is a story for another article!)

The EcoTraining guides and vehicles met us at 2pm. Once all our luggage had been safely stored in the trailer and we had climbed into the vehicles (one with a canopy and one without any protection from the sun) we drove a short way down the tar road before turning off at a “no entry” sign. The drive was through bush and scrub but, as it was September and the rains had not yet started, everything was bone dry and brown, except at the river courses and some pans. It was not very long before we were at the camp and the sight of large leafy trees was, for me, a bit of a relief as they provided dense shade.

We were shown to our allocated tents, given an opportunity to use the bathroom and unpack before gathering at the large dining tent for the necessary camp protocol, rules and regulations speech as well as learning a bit about the area and being introduced to Vicky the camp manager, Ross the field guide, Duncan the other field guide and Denise, a young lady from Switzerland who was spending a year at EcoTraining. The three other staff members were the ladies in the kitchen who made sure that we were well fed at all times and that hot water was always on hand for tea and coffee – Susan, Elisa and Overjoy. They were all marvellous in their quiet ways.

The programme that had been arranged for our stay consisted of morning and afternoon drives to various sections of the park with early morning coffee, fruit and rusks, tea / coffee and biscuits at the morning stop and drinks at the afternoon stop. Substantial and delicious brunch and dinner kept the hunger pangs at bay in between the drives. There was also plenty of time to wander around the designated parameters of the camp to bird or just to rest in the shade of the trees and make use of the reference library that is kept in the dining tent. The camp is unfenced and on the first night a lone elephant wandered between the tents and spent a while relaxing before attacking some saplings just beyond the vehicle shelter.

My primary goal was to see two birds that had eluded me in the past – Racket-tailed Roller and Crested Guineafowl. Fortuitously a pair of the latter species was seen as we arrived at Punda Maria camp as well as a small flock the following morning along the road to the Pafuri picnic site so, whilst technically not seen in the Makuleke section of the park, at last I could add them to my life list.

The experience was every bit as good as led to believe in the article in Promerops and the talk by Jonathan Hemp at a club evening meeting in July and any opportunity to return at a different time of year (after the rains) will be well worth the effort.

My list for the time spent at Makuleke has 145 species of which 4 were only heard. A better view of the Arnot’s Chats and Dickinson’s Kestrel would have been good but all in all not a bad number for approximately 3 days.

Here are a few pictures to illustrate the magic of Makuleke.