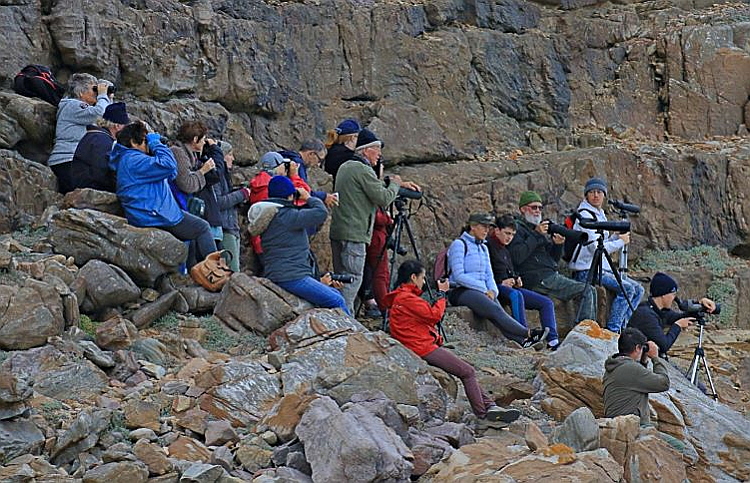 On 12 June, a sizable group of birders met at the entrance gate to Cape Point. While we were waiting for everyone to arrive, we saw Orange-breasted Sunbirds and Cape Sugarbirds. From there we headed down to Cape of Good Hope to do the sea watch, navigating past a troop of Chacma Baboons on the way there.

The conditions were not ideal as the wind was blowing offshore but we were still able to see a fair number of species, albeit distantly. There were many White-chinned Petrels and Cape Gannets, along with some Sooty Shearwaters. The highlights were sightings of both Northern and Southern Giant Petrels just behind the kelp. Thousands of Cape Cormorants streamed past throughout the morning, heading out from their colonies to feed. Crowned and White-breasted Cormorants sat on the rocks and were joined by African Oystercatchers.

The seabird activity started to die down later in the morning so we relocated to Olifantsbos for more birding and tea. Here we added Kittlitz’s Plover, Bokmakierie, Yellow Bishop and an overwintering Barn Swallow in full breeding plumage. We enjoyed some food in the sun before heading back to the gate.