The CBC outing on Sunday 22nd October, led by Daryl de Beer, was to the Cape Flats Nature Reserve. This private nature reserve is situated on the campus of the University of the Western Cape and is managed by the UWC Nature Reserve Unit.
There was an excellent turnout – partly due, probably, to the fact that it was a new venue for the club. The group of over 40 people was split into two.
In the briefing beforehand, Daryl de Beer introduced Laurenda van Breda, the Environmental Education Officer. She explained that the 34ha of the reserve include both Cape Flats Dune Strandveld and Cape Flats Sand Fynbos habitats and support a diverse population of animals and birds.

We were certainly not disappointed in terms of the range and quality of the sightings. In fact, a Peregrine Falcon was seen before we set off. Within a short time, my group (led by Daryl and Gillian Barnes) had seen a brilliant, metallic green Malachite Sunbird and an Acacia Pied Barbet which was perched in the sun on the fence. Those who missed this were fortunately able to see another later.

We had at least five sightings of a European Bee-eater. At first, we saw just a silhouette of the bird, with its characteristic dipping flight, then the bird in the distance, with the sun picking out the yellow and turquoise clearly, followed by a close-up view, and finally a couple more fly-pasts.

Some of the group missed the Black Sparrowhawk, and while we were standing and looking, hoping to see it again, a sharp-eyed birder spotted a black outline against a cloud in the far distance. After getting help from a ’scope as well as having some discussion, we realised that it was a Blue Crane, one of the more unexpected sightings of the day, and a highlight for some.
From the Bird Hide, we had excellent views of Red and Yellow Bishops in full breeding plumage amongst the reeds. Indeed, to be able to see European Bee-eaters, Acacia Pied Barbets and Red Bishops on the outskirts of Cape Town was a pleasant surprise for a Southern Suburbs resident like myself. The most common species seemed to be Red-faced Mousebird, Karoo Prinia and Cape Bulbul.

Daryl had mentioned that it was to be a “Nature Walk” – and the aim was to enjoy more than just the birds in the reserve. (Laurenda had also piped up at that point, reminding us to be aware of snakes). Our group saw two Angulate Tortoises and a brown Cape Dwarf Chameleon, perfectly camouflaged against a brown reed, which someone saw as she walked past. This was immediately declared to be the top spot of the morning!
The other group, led by Dennis and Gigi Laidler, was successful in seeing Chestnut-vented Warbler (Tit-babbler, previously) and Cape Grassbird, which we heard but could not see. Collectively, we also enjoyed Grey-backed and Zitting Cisticola, Yellow and Brimstone Canary and Bar-throated Apalis.

After about a two-and-a-half-hour walk, we repaired to the stoep and garden of the Environmental Education Centre for our tea and snacks, making the most of the limited shade as it had become rather hot.
It was a successful and enjoyable morning. 50 species were seen in all, with none only heard. Thank you to Laurenda van Breda for her input at the beginning and for Daryl, Gillian, Dennis and Gigi for leading the two groups. 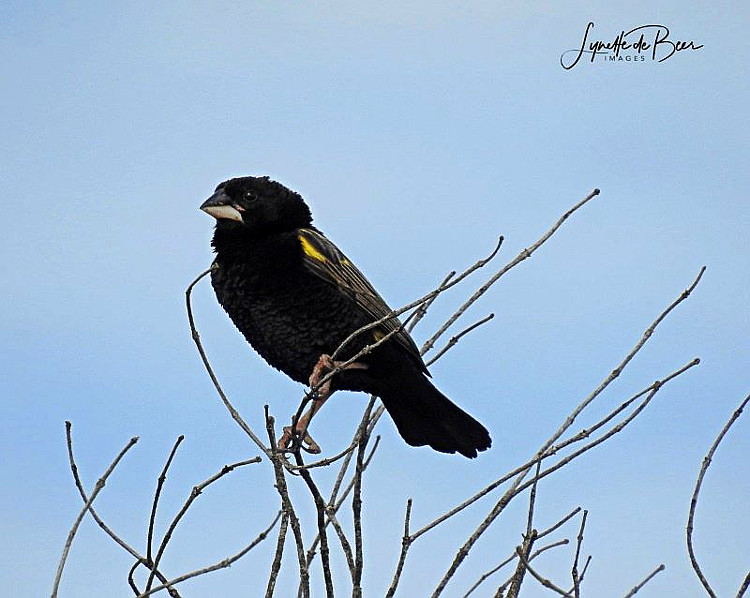 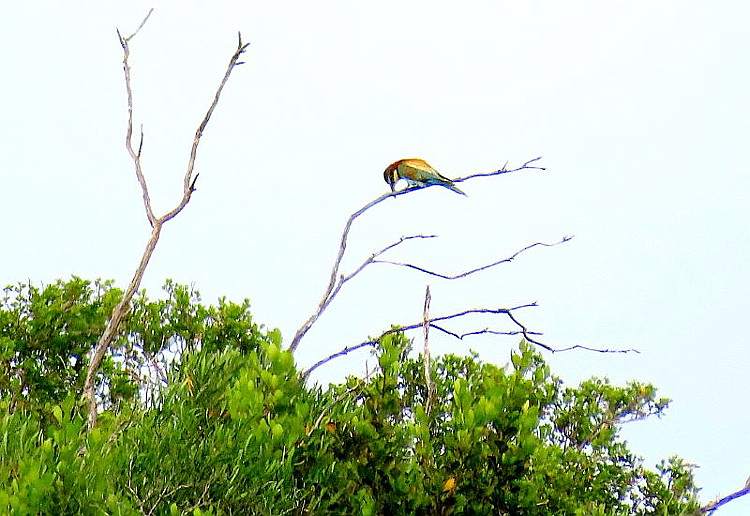 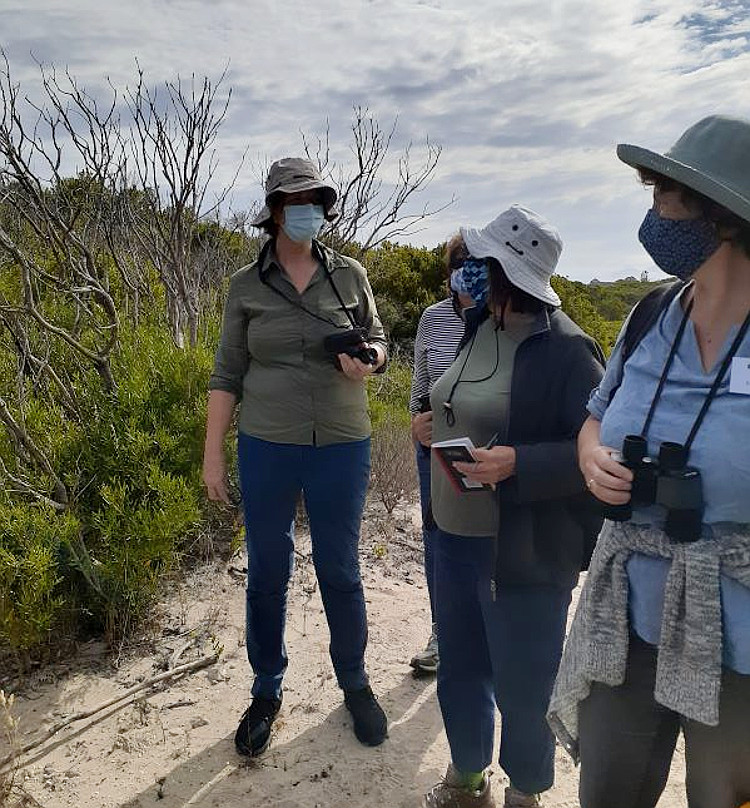 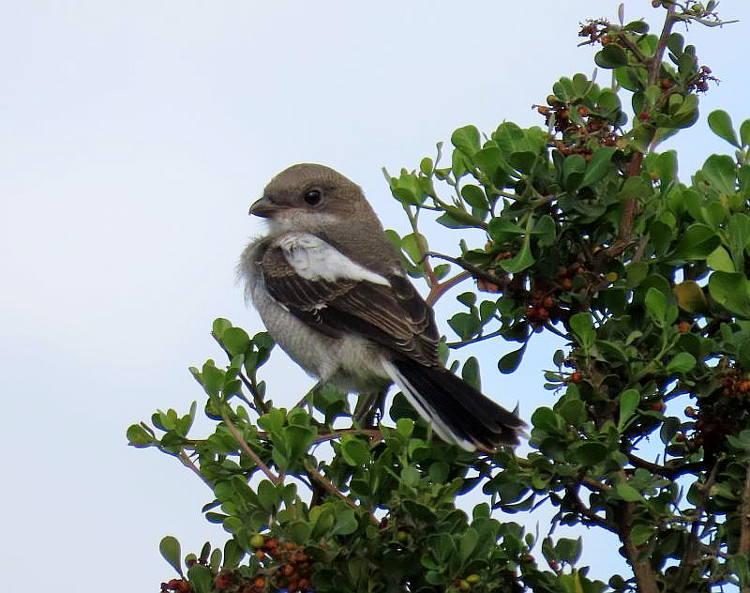 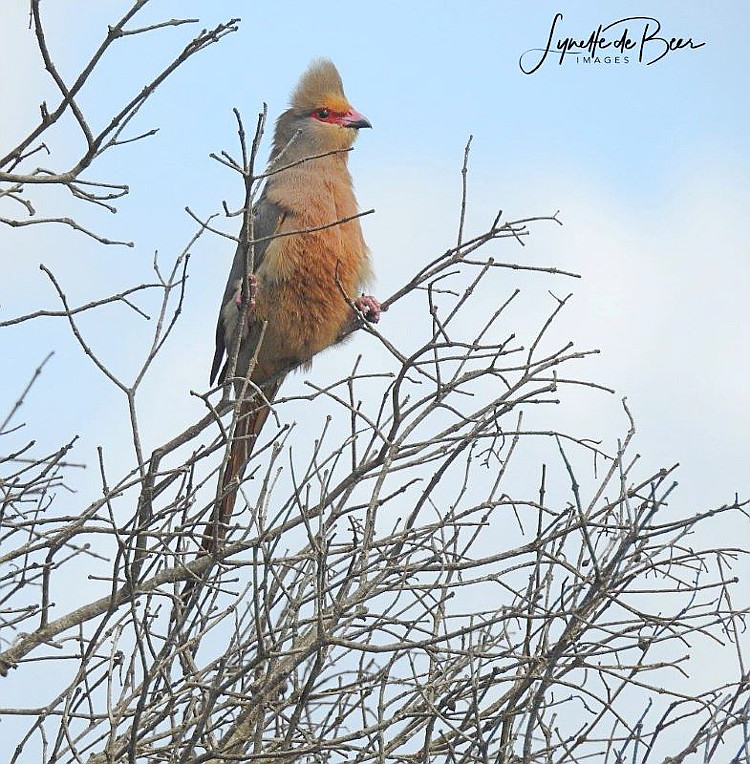 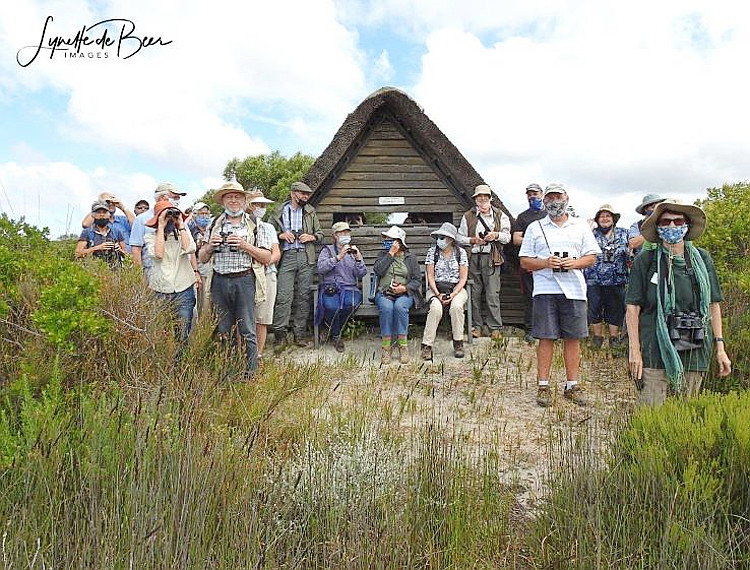 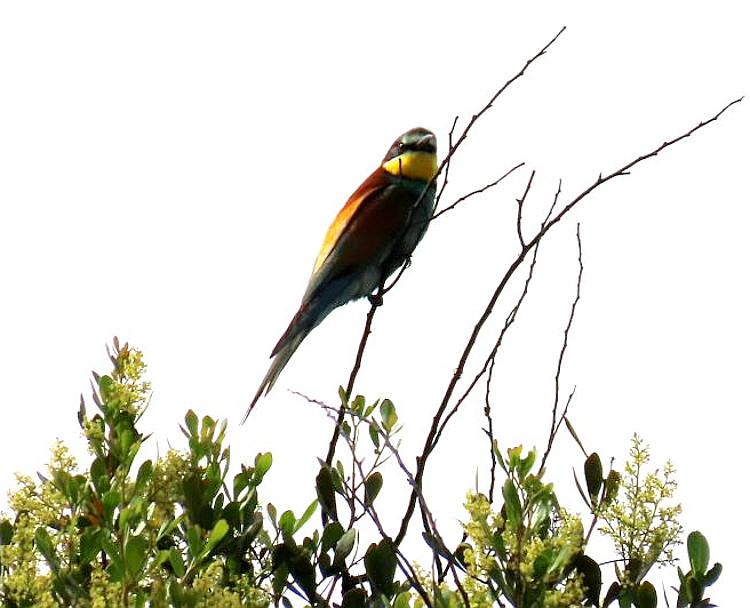 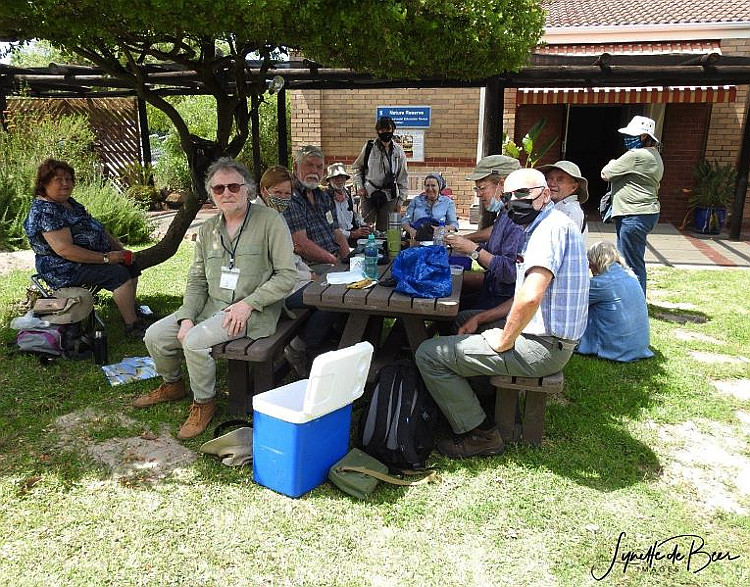