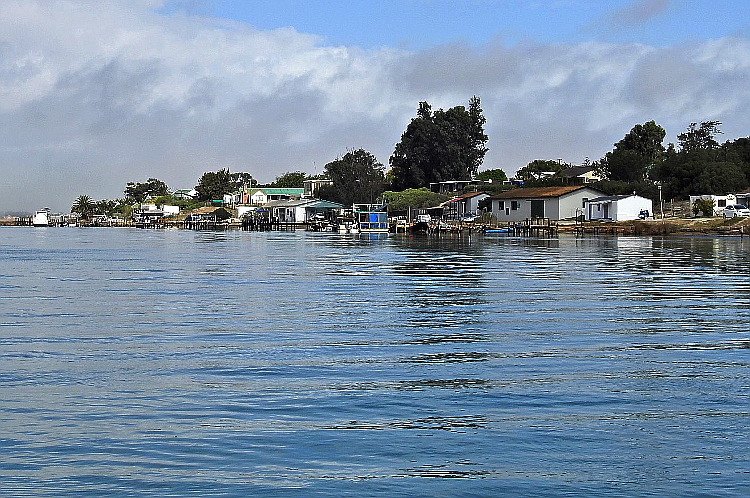 After a couple of scorching days with temperatures in the mid-30’s, it was a surprisingly cool and misty morning when our group of 24 members set out from Port Owen on the Berg River boat trip.
Tollie, the boat owner, explained that the water level was extra low due to drought conditions upstream (and in fact only a week later the river was not flowing at all at Paarl!). As a result the boat had to keep to the deeper channels, so that identifying some of the waders on the shoreline was not easy. However, a couple of Common Whimbrels were distinctive and the Grey Plovers obliged by showing off their dark “armpits” in flight. Some Ruffs, a Greenshank, plenty of Black-winged Stilts and, among the smaller waders, Common Ringed Plovers could be seen.

The river water was also saltier than usual near the estuary for the same reason, and this bore out Mel Tripp’s recent comments on Birdnet that some fresh water bird species had moved further upstream. This accounted for the missing coots, moorhens and ducks. It was a pity not to see “hundreds” of flamingos as promised, but a small but interesting mixed group of Greater and Lesser Flamingos clearly showed the difference in size. No pelicans either, and no Caspian Terns, but through the mist we did see a swirling mass of (probably) White-winged Terns spiralling up and whirling round and round in close formation, quite an impressive sight. And there were Sandwich Terns giving an exciting close up demonstration of plunge-diving for fish, very successfully in most cases. Many watchful cormorants waited on the banks as we cruised along, also herons, both grey and purple.

After a sunny spell at our turnaround point, the mist descended again as we headed for Port Owen on our return. Tollie made another short circuit, extending the cruise to almost two hours, but there were no new sightings of note. It was a pleasant excursion, not exactly “birdful”, but, as one of our members commented afterwards: “Being able to share in the joy of birding with other birders was special.”

And now we must just wait for the rain.

Thank you to John Fincham and Linda Hibbin for the photographs.