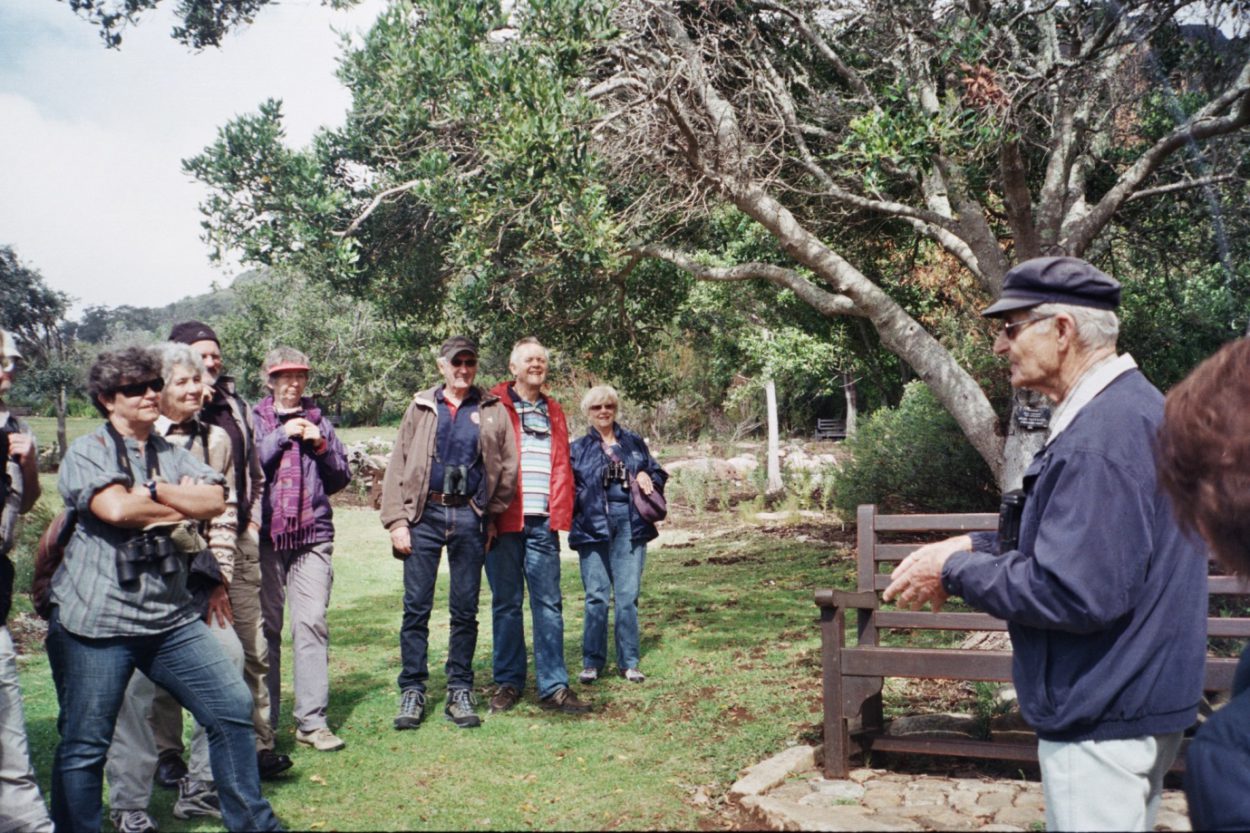 Despite hard rain at 6 am, the weather cleared dramatically and a group of twenty, including a few keen photographers and a visitor from the UK, assembled at 8 am. Peter Steyn welcomed the group with two splintered sticks in his hand, which puzzled at least one participant, until their purpose was revealed: at the start of the walk, he showed us three owl pellets which he had found, and used the sticks to dissect them.
The group were intrigued by the process and his explanation. We enjoyed a good sighting of an adult Spotted Eagle-Owl near the turnstile, followed by that of an extremely bedraggled chick in the Camphor Avenue. The chick had started life in the ornamental flower pot below the turnstile before moving away. There were further delights of owls to come.

We were lucky to get a very clear view of a Sombre Greenbul, as we wound our way to the Enchanted Forest. Peter took us on a lesser-known path towards the Canopy Walkway (“Boomslang”), explaining that this was a good area to see Lemon Doves. Two minutes later, one of the group announced that he had seen a dove. There were in fact three Lemon Doves, close to us, foraging among the leaves – a “lifer” for quite a few in the group.
We crossed the “Boomslang”, now enjoying sunshine, although the top of the mountain was still shrouded in mist. A lone Swee Waxbill was in a branch at eye-level, close to the walkway.

There were few raptors present in the garden, with the exception of a Yellow-billed Kite which flew just over us later on. We were compensated for the lack of raptors by many excellent sightings of sunbirds, with Orange-breasted Sunbirds being more plentiful than the Southern Double-collared Sunbirds. We were also treated to several sightings of Cape Sugarbird in the same area, to the delight of the photographers.
In its favoured nesting spot on the rock, we saw another Spotted Eagle-Owl, keeping a fluffy white blob warm, while the male kept a beady eye on us from high up in a tree opposite. In addition to the two sets of owls, we were aware throughout the walk of considerable nest-building and breeding activity (e.g. Karoo Prinia carrying some kapok in its beak, and a prinia nest observed later, as well as a Hadeda Ibis in its scruffy nest in the Camphor Avenue). Cape Spurfowl with very new chicks were seen sheltering under a bush, while some Egyptian Geese were feeding alongside ten goslings, whose numbers had depleted from the original eighteen.
The sighting of a single Black Saw-wing in a tree above the Dell was followed soon after by the unexpected sight of a Common Chaffinch on the bench next to the large pond, a pleasing end to a most enjoyable walk.

Peter also spoke about Gerry and Mariette Broekhuysen, at the bench which was built in their memory.

The following birds were seen, roughly in this order: 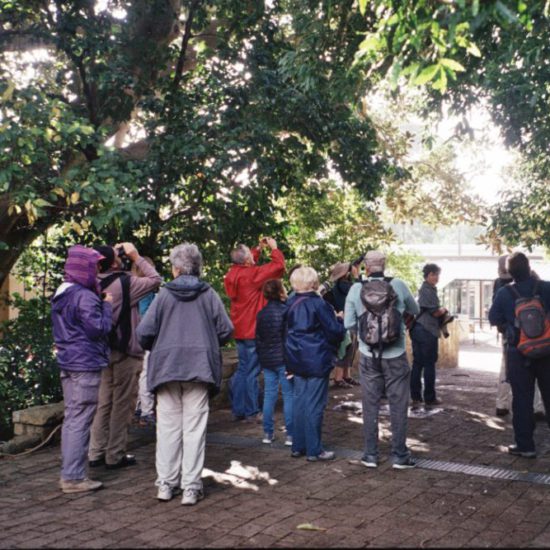 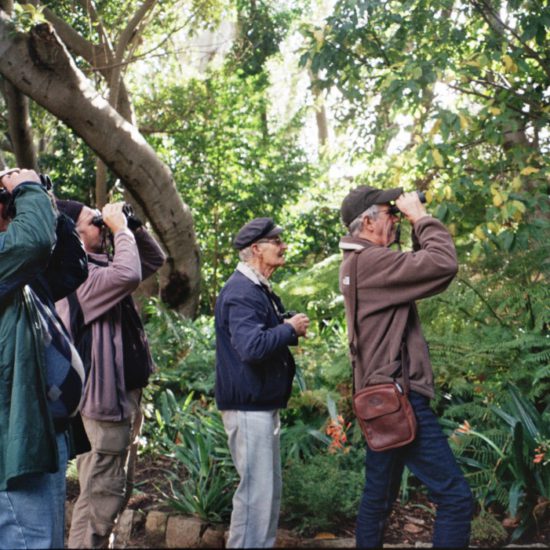 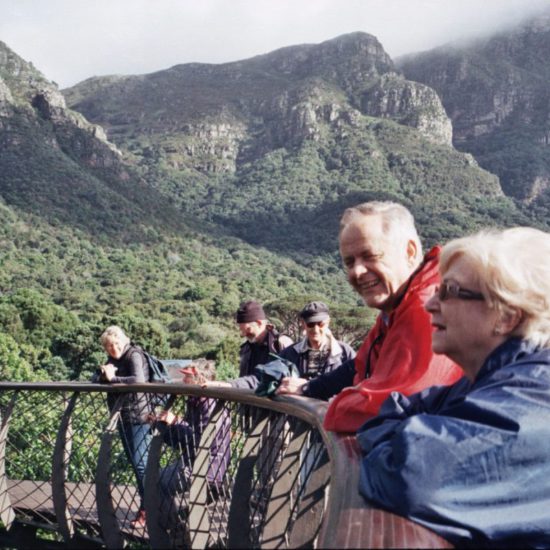 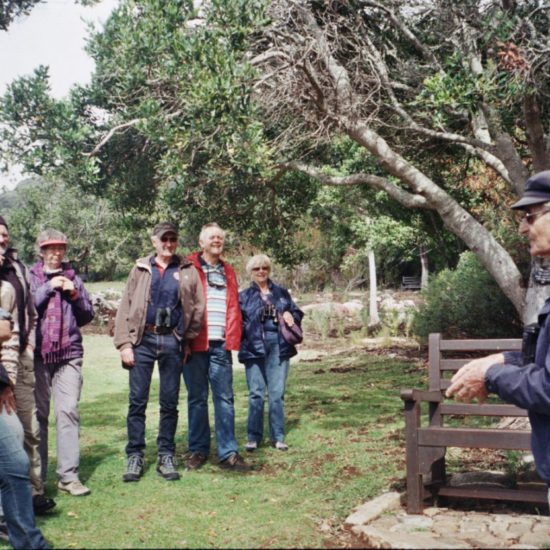 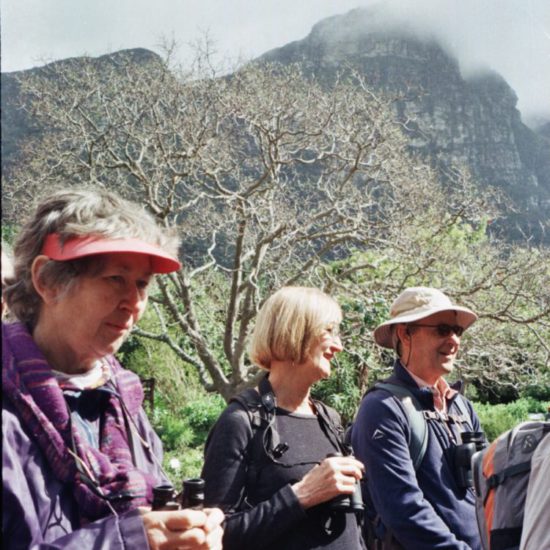