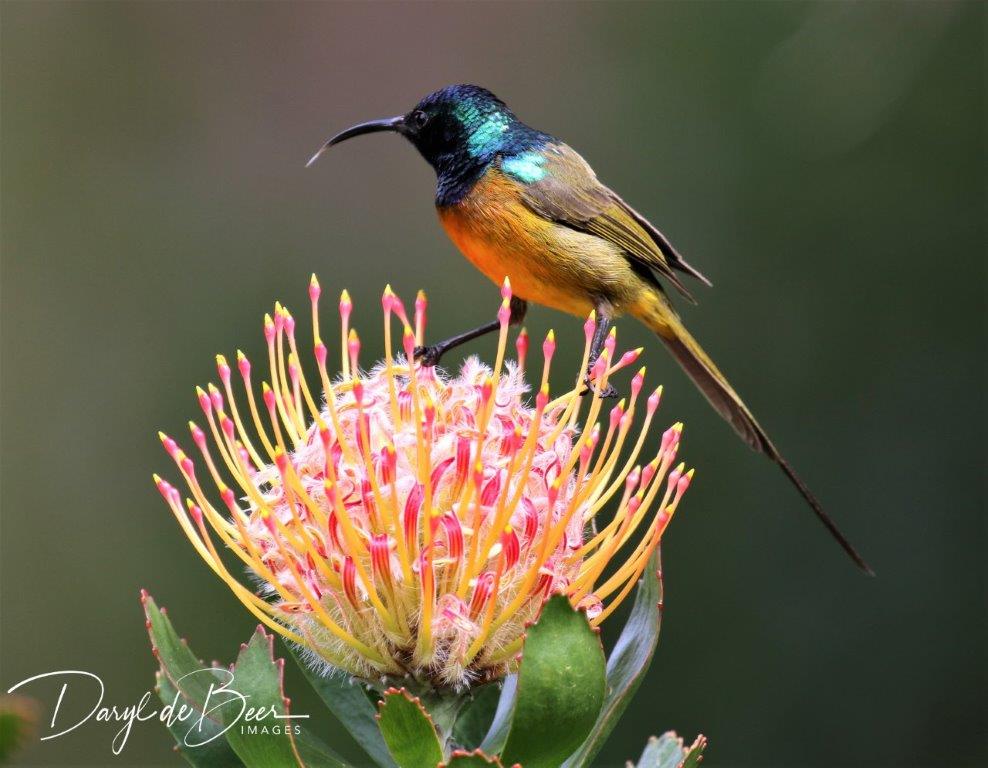 A good number of 43 people gathered on this clear, spring morning. Peter began by taking us to the large black flower pot in the corner of the Visitor Centre (near the Conservatory), where a Spotted Eagle-Owl was raising a chick. The chick was five weeks old and we were able to get good views of it stretching its neck and bobbing up and down.

Peter showed us some specimens of pellets and mentioned how last year’s chick had drowned in the canal below the same pot, while learning to fly. There is now a substantial section of green shade cloth covering that part of the canal to prevent this from happening again.

As we walked up the main path from the entrance gate, we had a fleeting glimpse of a few Bronze Mannikins flying across the path. A rather unexpected sighting was a Black-headed Heron, which landed on the large lawn, below the pond. We saw our only raptor of the day – an African Goshawk – as we approached Mathews’ Rockery. 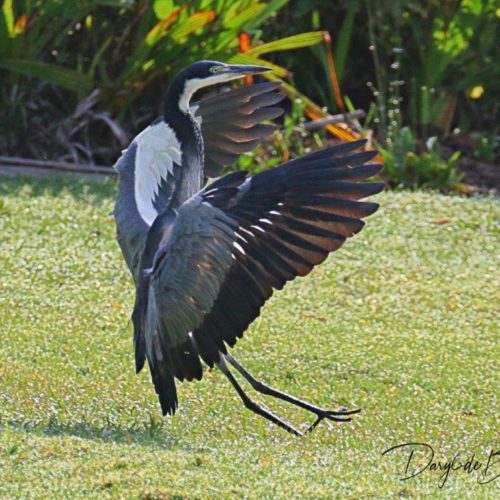 Sombre Greenbuls were plentiful and we had about four sightings of these birds which are often very elusive. We had hoped to see Lemon Dove in the Enchanted Forest, but were unsuccessful here (although the group did see one right at the end of the walk). However, we saw other species, such as a pair of Cape Batis which were high up in the canopy.

We had a wonderful, leisurely view of an Orange-breasted Sunbird in a cluster of pincushions near the path above the Dell. Peter said it was his favourite sunbird and encouraged us to look closely at the rich colours which were very visible. We also enjoyed seeing a female Cape Sugarbird later on.

We spent quite a bit of time at the owl nest on the rock above the Dell. The single chick had hatched on the Saturday before this and it was therefore only a few days old. It was not visible under the female which we could see from close up. The male was sitting in a tree not far from the rock, watching the proceedings with an ‘eagle-owl’ eye.

There was sad news about the owls soon after this. The chick disappeared overnight on Saturday, just one week old. It seems unlikely that it was taken by a caracal or mongoose, as one would then expect to see signs of a struggle and there was no evidence of this.

Our walk took us up to the exquisite Marsh Rose and on to the bench erected in memory of Gerry and Mariette Broekhuysen. Peter related some humorous and more poignant anecdotes about this inspiring former chairman of the Cape Bird Club, whom he described as his mentor.

Some of the group peeled off at this point and so unfortunately missed some exciting sightings at the end: an Olive Woodpecker was seen tapping on an old oak tree near the entrance to the Dell, with a Chaffinch close by. As was mentioned early, the ‘cherry on top’ was a Lemon Dove seen by those who were able to stay to the end.

27 bird species were seen. Thanks to Peter for a most informative and enjoyable walk.

Postscript: The owl chick in the flower pot was removed on Tuesday 16th October and placed in the olive grove. It was about to leave that night, so it was moved to pre-empt a possible drowning. It was fine the following morning.