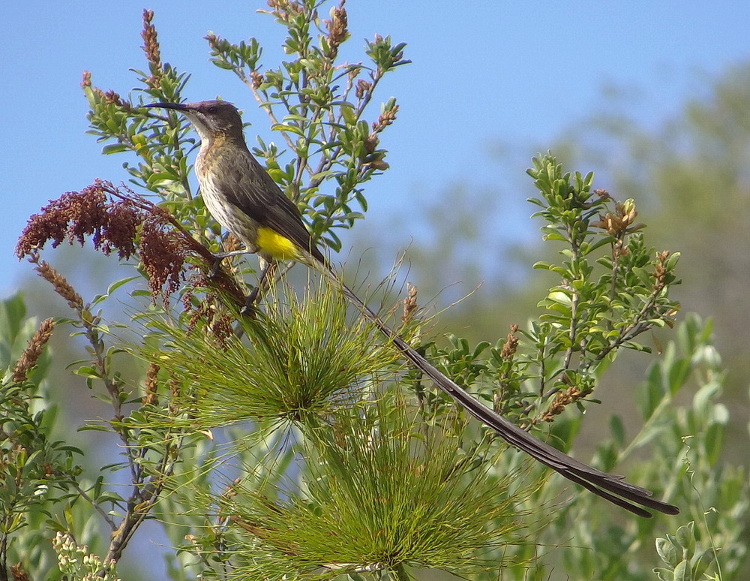 By 8am on Wednesday, 20 February, a large group of 50+ had gathered at the main entrance to Kirstenbosch for the monthly bird walk. The group included a lady from the USA who had taken part in the Kruger Bird & Wildlife Challenge the previous week. As this group was far too large for one person to co-ordinate, Linda Hibbin set off with half the group and I took the remainder.

Although the morning was pleasantly cool and slightly cloudy, the hot weather of the previous few days had probably taken its toll and birding was initially very quiet. However, the expected Sombre Greenbul was heard almost immediately. A Lemon Dove flew across the path soon after we entered the Gardens, but although it perched in the open, the light conditions were not good for viewing.
Southern Double-collared Sunbirds, Cape White-eyes, Cape Robin-chats and Olive Thrushes were soon spotted, and Swee Waxbills feeding on the tall grass stems in a bed near the otter pond were seen well. Walking up the outside of the Gardens, we reached the lawns as an African Goshawk, the only raptor of the walk, flew slowly over heading for the mountain.

Continuing up the lawns, we spotted our first Cape Sugarbirds at the same time as a group of Speckled Mousebirds which caused some initial confusion. However, both species were eventually seen well, and the number of Cape Sugarbirds encountered by our group during the walk was particularly large. The Protea Garden added Southern Fiscal and a pair of Malachite Sunbirds, the male in its green/yellow eclipse plumage. At our highest point, a profusely flowering protea tree provided the first Orange-breasted Sunbird, and excellent views of Forest Canary were obtained at the drinking fountain adjacent to it. A Brimstone Canary, slightly larger than the Forest and with a noticeably heavier bill, was perched nearby.

Heading towards the Rycroft Gate we passed numerous additional Cape Sugarbirds and spotted a small group of Cape Canaries. We then turned left to cross the Boomslang. A second Lemon Dove for the morning was seen as we reached the aerial walkway, and a third, giving the best view, crossed the path soon after we left the walkway.

Finally, nearing the end of the walk, we added African Dusky Flycatcher, an adult and a juvenile perched just off the lawn.

A most enjoyable walk concluded at about 10h15. Over coffee afterwards Linda Hibbin and I checked our respective group lists and came up with a combined total of 27 bird species. Her group had seen Cape Batis and Common Chaffinch (a female) which we had missed. Given that we had no swifts or swallows and only one raptor overhead, this was a very respectable species total at a fairly quiet time of the year.

Prior to the AGM on 14 March ………read the minutes from last year’s AGM
Hacking Team at Zandvlei Nature Reserve – March 2019.