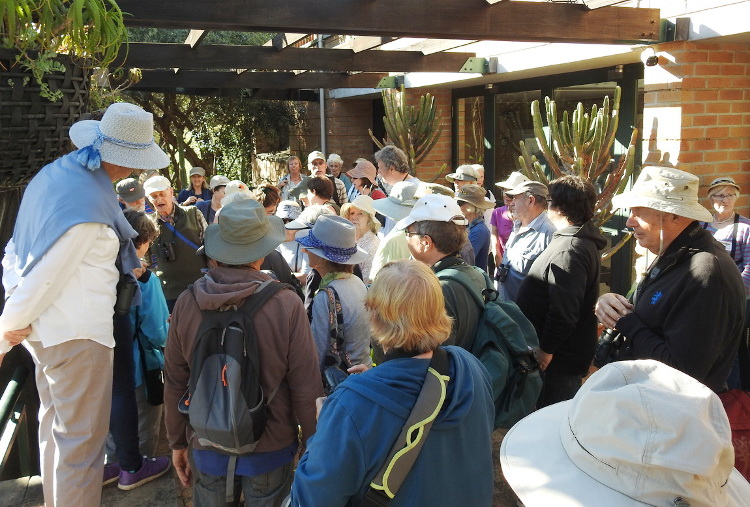 Peter Steyn kicked off the October Kirstenbosch Bird walk, attended by an enthusiastic crowd of 50+, with a short talk on the Spotted Eagle Owls of the Gardens, their prey etc., under the watchful eyes of the female owl and her two chicks in their flower-pot nest in the main entrance.

Margaret MacIver and Otto Schmidt then led the large group up into the gardens where Cape Canaries feeding on the seeds of the last of the spring flowers were soon joined by Southern Double-collared Sunbirds, Cape White-eyes, Cape Bulbuls and Sombre Greenbuls as the bird numbers grew rapidly. Cape Robin-chats and Olive Thrushes were dashing about the flower beds and a calling Levaillant’s Cisticola and a male Cape Spurfowl kept the numbers ticking over until we reached the Otter Pond when the interest briefly changed from birds to amphibians as Cape river frogs were heard and seen skulking in the pond vegetation.
The large group then split with Otto taking one group towards the Dell whilst Margaret and Linda Hibbin led the rest towards the top entrance. Cape Batis and African Dusky Flycatcher were seen in the Dell, where a highlight of the morning was a lovely view of a male African Paradise Flycatcher.

Heading through the cycad garden we had our first Southern Boubou and some of the group spotted a Cape Bulbul feeding its two chicks in a nest near one of the dinosaur statues.
We then passed the second Spotted Eagle Owl at her nest behind the well-known rock before heading into the Protea Garden and finding the first Cape Sugarbirds. Overhead we started to pick up African Black and Alpine Swifts as well as a single White-necked Raven. At ground level Karoo Prinia, Speckled Mousebird, Forest Canary and finally a male Orange-breasted Sunbird swelled the numbers.
As we approached ‘the Boomslang’, we had good views of several Brimstone Canaries and a pair of Lemon Doves just above ‘the Boomslang’ entrance was a great find.
At about 10h30 our group, now boasting a total of 28 species, rejoined the others near the main entrance after a great walk on a beautiful warm and wind-free morning.

As Otto and his group were looking at the Cape River Frogs, Margaret led her group to the Braille Trail where we listened to the calls of the Cape Peninsula Moss Frogs which are found there. We then proceeded through the Braille Trail catching glimpses of Cape Batis along the way. When we were on the path towards the Old Dam or the Weir as it is also known, we heard a knocking sound coming from the Stone Pines and were thrilled to see an Olive Woodpecker busying himself on one of the pines within our line of sight. He was rudely interrupted by a posse of Egyptian Geese that flew in making a great deal of noise, so with one of his screechy calls he flew off.

We proceeded toward the “Rock Owl” and then were spectators at a gruesome battle between a gecko and a Southern Boubou, in which, of course, the Boubou was the victor.

In the Enchanted Forest we almost tripped over a couple of Lemon Doves that were foraging close to the path. We slowly made our way back to the main entrance to meet Otto’s group and compare sightings.
Our combined total was 35 species which included hearing a Bar-throated Apalis and seeing the juvenile Grey Heron standing in the pond near the Moyo restaurant.