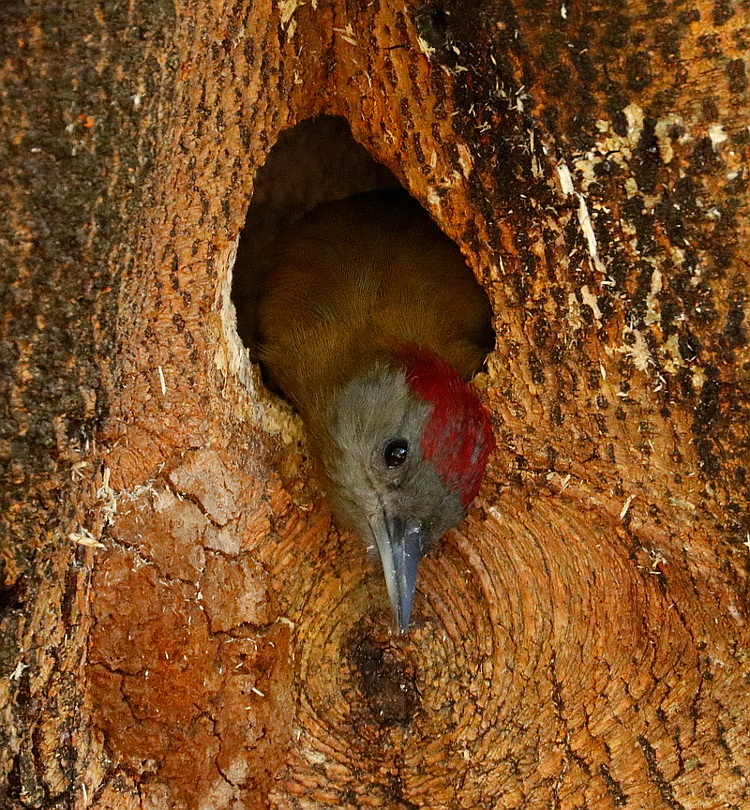 Just after 8am on Tuesday morning, 11 May, a large group of 60 (covering all ages from toddlers being carried by their mothers upwards) headed off up the gardens on the monthly bird walk. It was a beautiful calm sunny morning, and fortunately there were a number of good birders present who could slot in along the column of people to assist with bird identification.

As expected, the first bird to be heard was the Sombre Greenbul, but it took some time and patience before one of these common but skulking individuals showed itself. On the main path near the large pond a bush on the right was a productive stop with a Bronze Mannikin (recently introduced but now becoming quite widespread on the Peninsula) the first bird to be sighted, followed by Common Waxbill, Cape Bulbul and a group of Speckled Mousebirds. Forest Canary and Cape White-eye soon followed.

Making for the Dell, we skirted left of the sprinkler system and checked out the Olive Woodpecker nest site. All was quiet so we continued up through the cycads where a large golden orb spider web was an interesting distraction. Back on the main path a pair of Common Chaffinches was a good sighting and a male Cape Batis was heard calling and showed nicely. Continuing upwards we heard the grating call of the Cape Sugarbird and soon spotted several. An African Goshawk was also calling down the valley, but it did not show itself.
Southern Double-collared Sunbirds were everywhere, and at our highest point we were also able to add several Orange-breasted Sunbirds and a male Malachite. Also showing nicely was a pair of Swee Waxbills huddled together and preening each other. A pair of Southern Boubous was spotted briefly working their way through the shrubbery behind a Sombre Greenbul which did show itself (at last).

Heading down towards and then over the Boomslang, we searched for the Spotted Eagle Owls and Lemon Doves, but unfortunately neither obliged.
As a last stop at about 09h45 we returned to the Olive Woodpecker nest site. Here we also added African Dusky Flycatcher to the list. We were soon rewarded with both the male and female woodpeckers flying in and entering the nest hole. After a short while they both left again, but returned for another short visit a little while later. Myburgh commented that it was exactly two months since the birds had started excavating the nest hole, and doing a bit of calculating from the time they had stopped excavating, we thought it quite possible that they were now feeding small chicks. This was a very fitting highlight to a most pleasant morning’s walk.

The bird list for the morning, consolidated over coffee after the walk and adding in a couple of birds only seen by some of the group – such as Klaas’s Cuckoo, Cape Turtle Dove, Rufous-breasted Sparrowhawk, Black Sawwing and African Olive Pigeon – came to the very creditable total of 32 species.

Reviewing the breeding banks at Strandfontein – May 2021.
Youth – Birding Quiz at the Aristea Primary School, Kraaifontein – 15 May 2021.