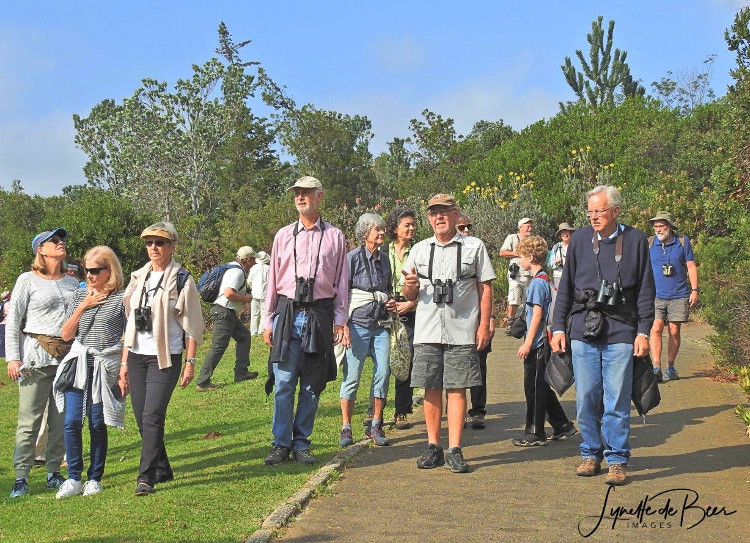 Thirty-one people braved the early morning traffic and misty conditions to meet at Kirstenbosch at 08.00 to participate in the Bird Walk.

No sooner had we started our walk than we saw a fairly unexpected sighting for Kirstenbosch, 2 Levaillant’s Cisticolas. We continued to meander through a scenario of beautiful and colourful plants, interspersed with Canaries (all 3 species, Cape, Forest and Brimstone were spotted on the day), Cape Sugarbirds and Cape Bulbuls. A frisson of excitement ran through the birders at the sight of an airborne African Goshawk, alas, the only raptor to be identified on the day, although we can report on the sighting of 4 different Spotted Eagle Owls. We did not see any Orange Breasted Sunbirds, although sightings of SDC Sunbirds and Malachite Sunbirds partially made up for their absence. We heard (often) and sighted a Southern Boubou which gave us an encounter of the close kind. In search of a Lemon Dove in the Enchanted Forest we heard an Olive Woodpecker (and successfully achieved our Lemon Dove objective). Unusually, we had to wait more than 5 seconds to be greeted by a Sombre Greenbul, but he eventually called and made himself visible.

As has become customary, after a most enjoyable walk, a few diehards enjoyed a “Pensioner’s Special” of scones and coffee, and much chatter ensued.
All in all a good time was had by all, with 33 bird species being recorded.