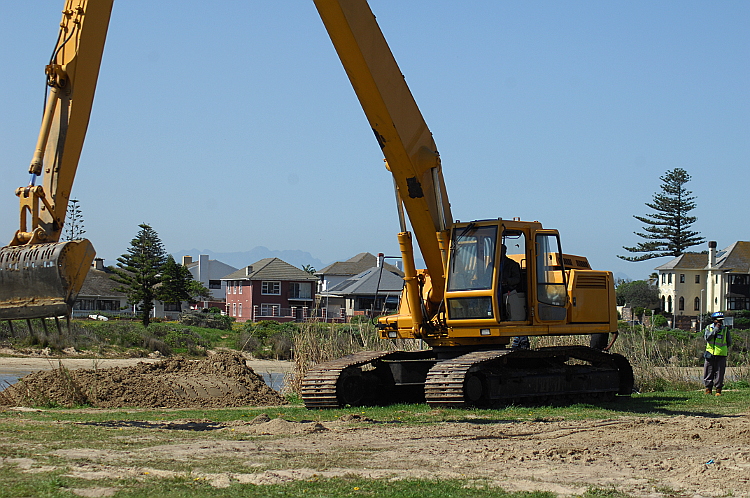 Spring has arrived at Zandvlei and there is lots on the go. Down at the “bends” between Thesens bridge and the No.2 corner, dredging of the estuary is taking place. This is long over due and is part of the long term maintenance of the estuary. Also to be seen is the new Strandveld garden layout adjoining the Zandvlei Nature Reserve office (the old Rendeveue/bowling green). It is a work in progress and looks very interesting.

The sky was blue the air was warm, with a slight breeze from the NW, with rain forecast for tomorrow. The mouth of the estuary was open and the water flowing under the railway bridge was at 1 metre per 8 seconds and crystal clear.

Bert carried on in his area chopping large branches which we could hear all afternoon. Barry went to work on some trees he knew in the area adjacent to Rutter Road pond on the west side of the railway line. Earlier he was showing us his new high quality facemask made with graphene. The railway lines are rusty with no trains going up or down the line for months. They operate from Cape Town to Retreat station reported in the news. Sue got stuck into the vechia which has “taken off like a house on fire”. We cleared this section very well last year we thought, ha,ha. Robin and I carried on in the reed beds cutting down rooikrans, manatoka,brazilian pepper and port jackson saplings which are becoming well established. There is plenty to do in this area.
Robin found a few interesting business cards from a Maserati motorcar salesman. Printed on them is they are worth R20,000.00 to the person as commission for the sale of a car at the Cape Town franchise. What on earth are these cards doing in a wetland area no where near a road?
There were plenty of dragonflies about and horseflies as well. While working the Leopard Toads were calling intermittently from the entrance of the Keysers and Westlake Rivers to the north end of Zandvlei.
31 species of birds were seen and the highlight was a pair of Yellow billed Ducks with 8 chicks being maneuvered around the canal. There are still a few Greater Flamingo present at the northern end of the vlei.