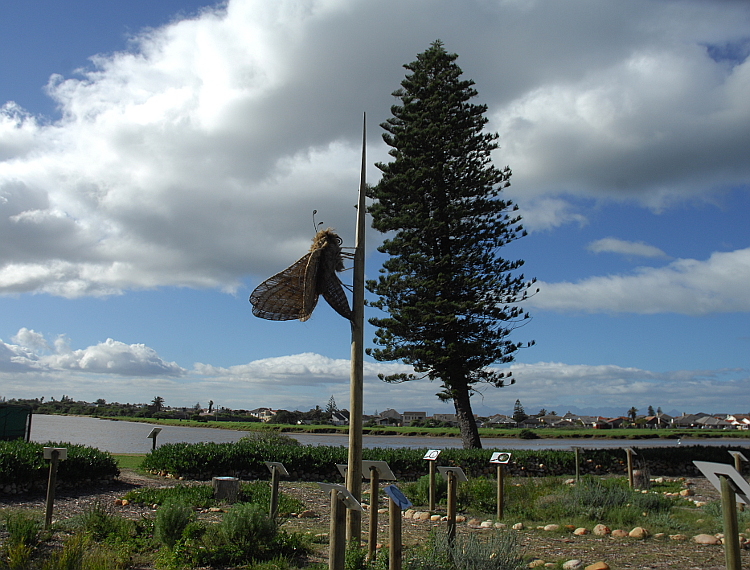 The weather was partly sunny initially with a cool wind blowing from the SE. The clouds cleared making it warm in the sun and cool in the shade. The estuary mouth was open and the water was flowing at 1 metre per 6 seconds under the railway bridge.

In Promenade Road at the Lookout Centre Education plant circle a Kedestes barberae (Barbers Ranger) butterfly has recently found its way up a pole in the centre of the circle. This endemic butterfly is endangered with only 2 viable areas left undeveloped, with its host plant grass habitat.

Across the road is what appears to be a shallow lake currently with all the rain recently. It is a project to rehabilitate a small wetland area to increase the biodiversity, over the single species kikuwu grass which has been removed and sprayed in the first part of the process. The money eventually came from National government and has been planned for a number of years. It is hoped it will provide a Leopard Toad breeding area and for other frog species as well. We are interested to see if the seepage from the mountain begins to feed parts of this wetland with a flow under the Main Road and railway line. This site helps to create and re-enforce the link from the Table Mountain chain to Zandvlei via the Old Boyes Drive part of the Zandvlei Nature Reserve. Watch this space.

Today was a very different hack.

We did none of that, and planted trees and shrubs instead. The idea was Sue’s about 2 1/2 years ago.
Kyran the Manager of the Reserve organised 35 suitable plants grown from locally sourced genetics. Species include searsia, camphor, tabakbos and Psoralea pinnata (bloukuer). It is planned to collect some local milkwood seeds and grow some trees for various areas around Zandvlei.
These plants were dropped off the day before in a well disguised locality for us to carry to the night heron roost area, where we will be introducing local indigenous trees for roosting in years to come. The shrubs are for screening the trees against the ferocious SE wind in the summer time. In time we will open up the invasives for the planted trees to dominate and provide suitable roosting branches in a sheltered environment. This is viewed as a long-term project and additional trees will be planted in future.
All of us thought it might be quite easy to get this job done. Not so. It was relays to get the bagged plants to the planting area, then laying out the plants and then planting them. Before we knew it it was 16h30. There were 2 more to be planted and none of the 33 had received any water yet. We know on Monday a cold front with wet and cold weather is due to arrive.
(Note – On Sunday Barry went and planted the 2 remaining plants and also watered all the plants. Many thanks Barry.)

We saw a few dragonflies about and there was 1 Silver bottom Brown butterfly too. The Masked Weaver has started building a new nest in the reeds. The small dam near Promenade Road was over flowing out the eastern end towards the main water body, creating seasonal wetlands in that direction. It is almost overflowing out the west end as well. We saw foot prints of the grey mongoose and a Grysbok in the muddy areas.

Highlight today was 13 Black crowned Night Herons (including 1 juvenile) and a Giant Kingfisher. A male Southern Double collared Sunbird in full breeding plumage was seen on our way home. A total of 24 bird species was seen.