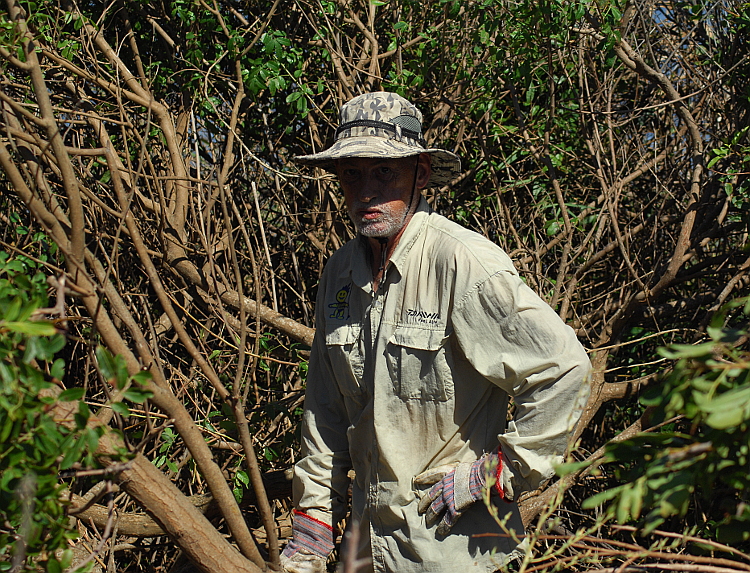 A very hot afternoon with temperatures in the +30 degrees centigrade range. There was a slight breeze from the SW with low cloud on the mountains. We saw 4 Jackal Buzzards circling in a thermal and rising high above Zandvlei at 14h00 before we set off to the work area. The isolated pond is quite empty now with about 35cm of water in the deepest part. There is a school of fish in various sizes and the photos suggest Banded Talapia.
There are very few flowers to be seen currently, the indigenous potato creeper has mauve flowers and some small patches of low growing flowers are all that is left in the very hot windy conditions with possibly below average rain fall the last 3 months. The dune mole rats are very active pushing up mounds in many areas.
I photographed a pair of flies mating which I had previously recorded about 6 years ago. A fly specialist for African flies at the Smithsonian University ID it as Mydidae – Afroleptomydas rufithorax (Wiedemann, 1821). Body length is about 35mm and they are powerful fliers. I have submitted the photos to him for his comment.

The scouts were out in their yacht practicing and in the background of the photo one can see the height of the Muizenberg landfill site growing higher and higher by the year.

Bert continued chopping down the large Brazilian pepper trees. It was hot going for him as he was working in a windless area behind the trees. I continued in the reed beds near the railway line, which are growing taller and encroaching at an alarming rate in many areas. There are still plenty of Port Jackson and Rooikrans saplings and seedlings to remove there.

I found a fresh midden of a small Grysbok or possibly a Cape Hare? The lens cap is in the photo to give some scale to the droppings.

21 species of birds were seen, including a lone Common Tern in non breeding colours. Highlight was a Little Bittern which flew out of reeds 3 metres from us, near the railway bridge. We also saw a Yellow billed Kite patrolling along the western shore line.

Butterflies present were African Monarch, Citrus Swallowtail, Silver bottom Brown, and an unknown small blue butterfly. There were a number of dragonflies patrolling their territories.