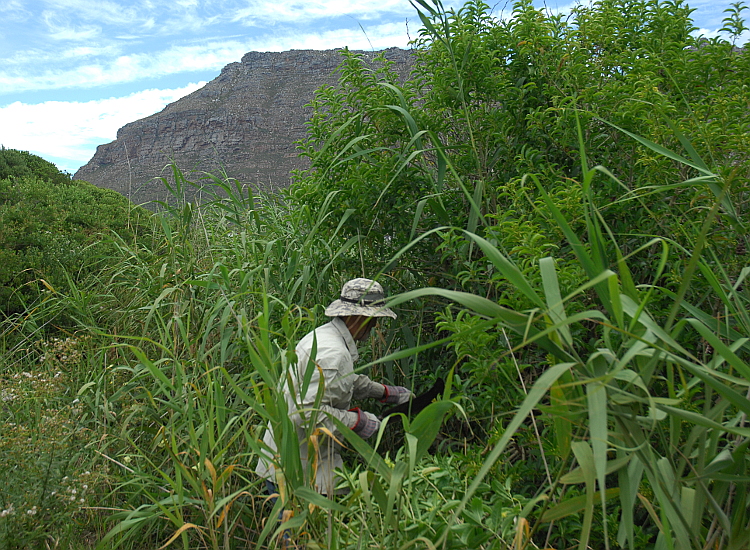 Today we were at a new section of the Nature Reserve, never hacked by the group since inception. This area is between the railway line and the Keysers River almost behind the Steenberg railway station, and extends up to Military Road. I shall confirm the block number with the Manager. Looking west across the Keysers River is the suburb of Frogmore Estate.
When crossing the railway line it was evident that no train has run on the tracks for a long time as they are rusty as far as the eye can see. The overhead lines were valdalised a couple of months ago at the False Bay station boom crossing.

There were some interesting looking clouds at a high altitude and a few at mountain top level today which blocked out the sun for a few minutes as they passed along in the NW wind which was gusting at times. We were lucky with the weather as it was pleasant for working in.
The water pipe crossing the Keysers River is leaking again, after “being repaired”. It is not quite as bad as the last time, but bad enough as nobody seems to know about the issue and the problem it is causing. The odour in the air has strong sewerage smells to it and the area is totally over grown with invasive plant species from this nutrient rich liquid fertilizer. It has been communicated to the Manager and others.

To start Bert cut down a large Cestrum tree on the banks then he tackled a large Port Jackson which changed the vista in the area after it came down. (See the before and after photos). Further north there are some large forests of Port Jackson, we started on the first one. See the photos of the density as an indication. These forests are in alluvial soils in which Buffalo grass is the open area specie dominator between dune shrubs of a variety of species. There are very good Wild Olive tree specimums too.
I am sure we will find more interesting things in future months.

I found a pretty vygie creeper, in flower (Lampranthus emarginatus) in a sandy location along the western fence line. The bird and animal wild were very scarce today where we were working. There was a new rain spider nest (photo). A Cape Skink scuttled across a pathway when we approached and there was a startled Cape Lappet Moth caterpiller in the Port Jackson forest.

Bird species seen totaled 10. A Brimstone(Bully) Canary was the highlight.

Thank you very much to “The Team” and all the others who came to help make a difference this year, it is evident for anyone to see.