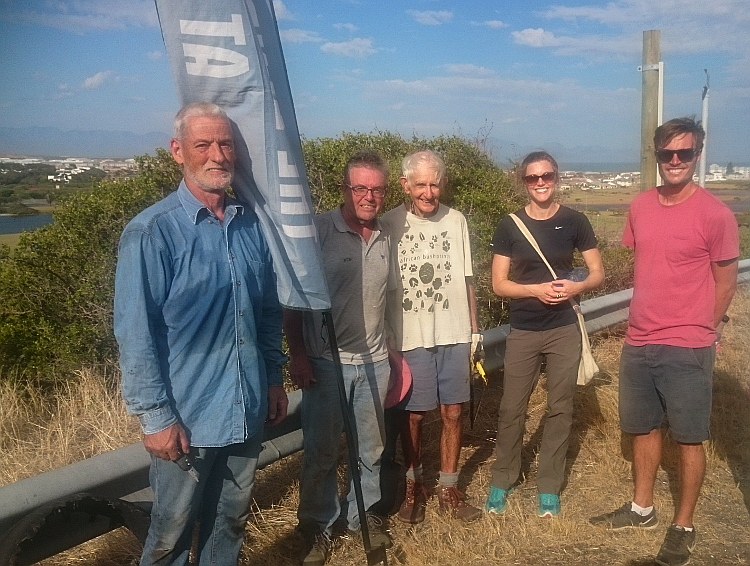 Barry worked in the lower section cutting Port Jacksons and ended up knocking some stones down the slope and onto the roof of the nightwatch ladies hut in th traffic dept below. She came out all startled he said. The rest of us worked on the upper slope which is difficult going.

Two new volunteers Louise Baldwin (Marina), Nick Halle all the way from Blouberg came today. Bert went to the Boyes Drive entry which he says is much easier. He was given a glass of water by a neighbour when they asked what he was doing. I found a small Outeniqua Yellow wood tree planted with plenty of compost in the hole. There is a sisal plant behind the Milkwood and tracoma with the blue flowers too which need to be removed. It is on the southern side of the Milkwood tree. Found a pair of secateurs in a small bag and gave it to Robin. A few Autumn Brown butterflies were flying about. I also disturbed a Cape Stick Insect (Phalces tuberculatus) when pushing through the shrubs.

Sue took a photo of the group afterwards as I had left the camera battery on charge at home again. Only a few bird species seen Redwing Starlings, Feral Pigeons, Redeye Doves. Many smaller seedlings and saplings have died amongst the shrubbery, the soil is very dry. There appears to have been a pathway made of builders rubble at some stage. There is also a leveled off area with rocks for a bench overlooking the corner of Old Boyes Drive and Verwood Road. I will need to investigate further. Mainly Port Jackson and Manatoka trees and saplings were cut down today.

It was very warm today about 30 degrees with just a slight breeze from the sea. Blue sky with high cloud. 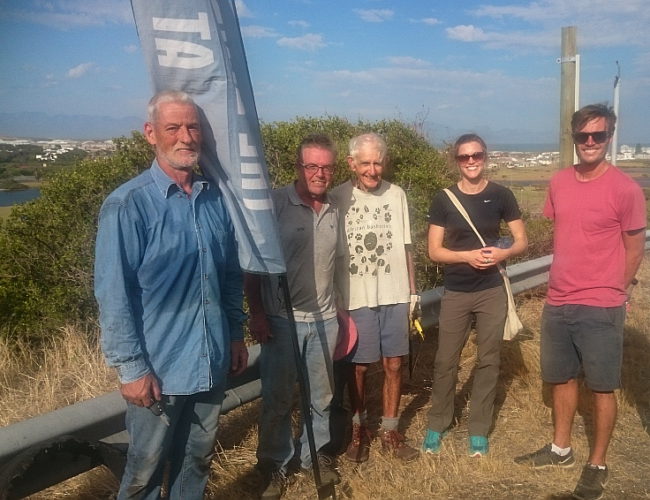