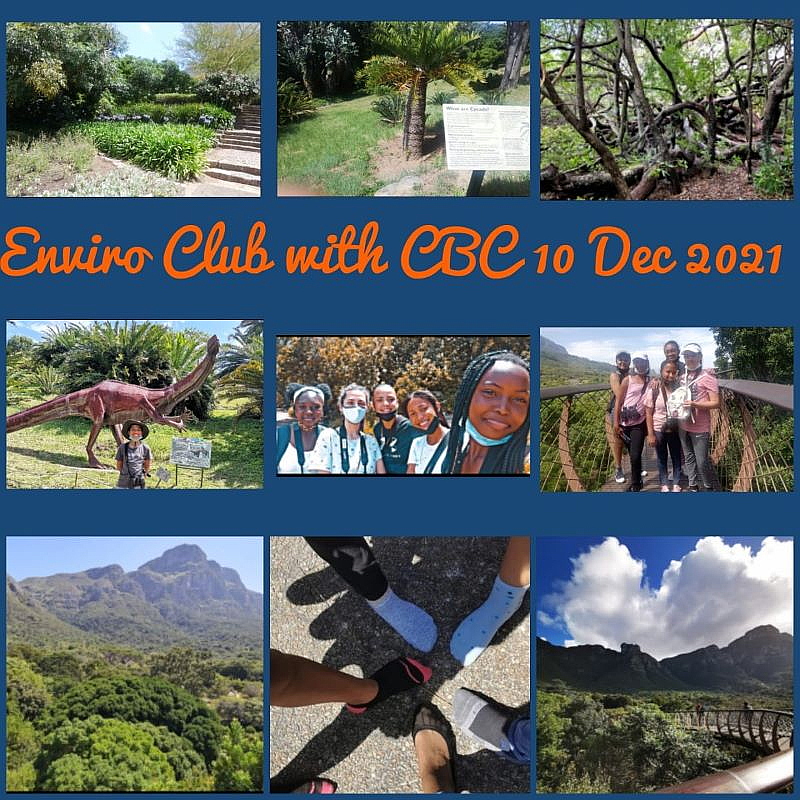 The Cape Bird Club’s 2021 Youth Education Programme rounded off the year with two exciting events for Floreat Primary School, which allowed Grade 5-7 learners to experience birds up close and in their ecological context.

The Birding Basics workshop, held on the 25th of November 2021, gave Grade 5-7 learners from the school’s Environmental Club the chance to explore the various unique traits of birds in a hands-on and immersive way, providing them with a practical demonstration of the function of these traits and their usefulness to birds.

At the “Feathers” tables, learners pored over examples of the three different types of feathers (flight, contour and down), and enjoyed examining these feathers under magnifying glasses to see the complex feather microstructure and lifting them up to the light to see their iridescent colours.

At the “Beaks” table, learners simulated the functions of different types of bird beaks using their human-made analogues (such as straws to represent the long nectar-feeding bills of sunbirds, or skewers to represent the sharp, stabbing beaks of fish-eating herons), tearing marshmallows to simulate the flesh-tearing function of raptorial beaks and picking up and crushing nuts with tweezers and nutcrackers to represent how seed-eating birds feed.

Meanwhile, at the “Legs” table, learners were given a demonstration of the strength of birds’ hollow leg bones by rolling up pieces of paper into hollow tubes, and using these to prop up paper plates with objects of various weights placed on top. The learners were both amazed and impressed at the weights that these seemingly weak hollow paper “legs” could support – a striking demonstration of the structural strength of bird bones, despite their seeming fragility.
Cape Bird Club Youth Education director Johan Schlebush demonstrates the structural strength of birds’ hollow bones, using paper tubes to represent bird legs.
Photos provided by Kristi Jooste.
While the educational content of the workshop consisted mostly of the CBC members and teachers providing information to the learners, the learners also took the opportunity to provide their own knowledge and insights – such as one learner at the “Feathers” table who remarked that the function of contour feathers in birds (which provide the bird’s body with its streamlined shape) is reminiscent of that of models’ contouring makeup.

At the end of the day, each learner left with a complimentary back issue of African Birdlife or Birds and Birding magazine. There was also a moment of piqued interest when a red-winged starling flew into the school hall during the CBC staff’s talk to the learners at the end of the workshop, prompting a brief challenge to the learners to estimate the bird’s weight in grams.

Highlights of the Floreat Primary outing to Kirstenbosch Botanical Gardens on the 10th of December 2021, including views from the Boomslang canopy boardwalk and an example of the dinosaur sculptures in the cycad garden.

On the 10th of December, the same Floreat Primary learners had the chance to put their new-found bird knowledge to the test with an outing to Kirstenbosch Botanical Gardens. Learners were provided with binoculars and accompanied by teachers and Cape Bird Club members on a birding and nature walk around the beautiful and historic gardens, during which they were challenged to spot and identify as many birds (and other organisms of interest, such as insects) as they could. While the protea gardens were unfortunately devoid of their usual flocks of chattering sugarbirds, the learners still had the chance to see many forest birds, such as Southern Double-collared Sunbirds, Cape Batises, Canaries and Cape Turtle-doves. However, the up-close sightings of Hadedas, Egyptian Geese and Cape Spurfowl seemed to be cause for greater excitement among the learners, as were the many freshwater crabs and tadpoles they managed to spot in the otter pond.

To end off the walk, the learners took a trip along the gardens’ famous Boomslang canopy boardwalk, where they were treated to panoramic views overlooking the city and looking up towards the mountains (hiking trails on which they had gone on previous school outings were excitedly pointed out), and also paid a visit to the cycad garden, where they marvelled at the gigantic sculptures of extinct South African dinosaurs, which they were surprised and excited to learn were the evolutionary ancestors of the birds they had seen. While the inanimate nature of these imposing creatures was undoubtedly a relief to many of the learners, others seemed disappointed that they would never get the opportunity to see these animals in the flesh.

The day also provided the learners with an enriching cultural experience, as they visited a free art exhibition in the Richard Crowie Hall on their way out of the gardens. Fitting with the theme of the day, the bird and other wildlife paintings garnered the most interest and appreciation from the learners.

By hosting events such as these, the CBC hopes to foster interest in and enthusiasm for nature, ecology and biodiversity among Cape Town learners, potentially inspiring the ornithologists, ecologists, conservationists and nature custodians of the future. We hope that the workshop and Kirstenbosch outing provided unique, enjoyable and unforgettable experiences for all involved, and look forward to assisting in many other school-based and educational events in the future.

Special thanks go to teacher and UCT Biological Sciences alum Christie Munro for assisting as a volunteer on the Kirstenbosch outing, and to Kristi Jooste for organising the school and parental consent and transport for the events, as well as providing photographs.