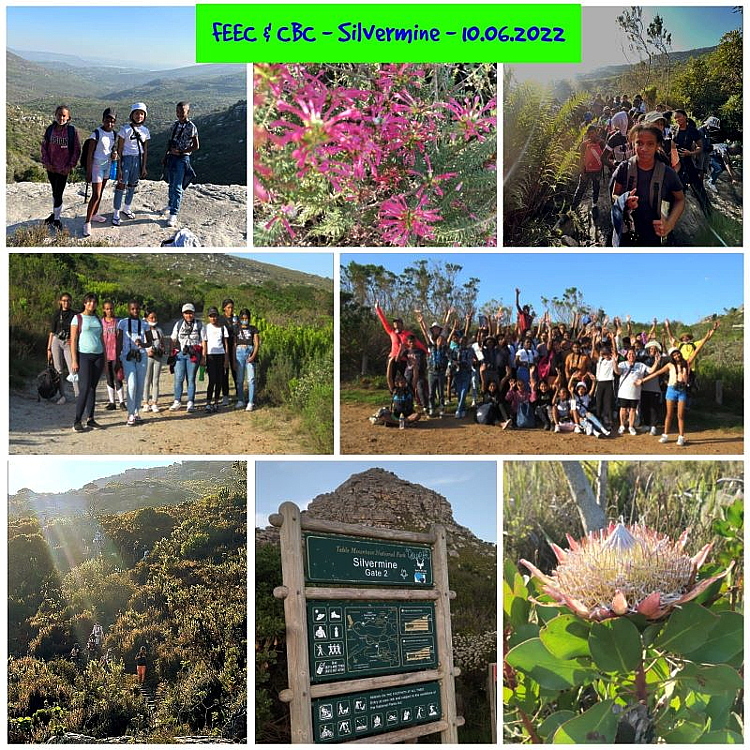 Nearly 40 learners from Floreat Primary were treated to a day of relaxation and appreciating natural beauty on Friday the 10 June 2022, when the Cape Bird Club youth educators and volunteers accompanied them on a nature hike in Silvermine Nature Reserve.

Armed with binoculars and challenged to find endemic Cape fynbos nectarivores such as Cape Sugarbirds and Orange-breasted Sunbirds, the learners took the trail leading from the second gate into the park off Ou Kaapse Weg to the top of the Silvermine Waterfall, where they were encouraged to relax and meditate and take in the beauty of their surroundings.

However, the day was also not without its educational content, with the learners given a lesson on how to identify sunbird- and sugarbird-pollinated plants such as ericas and proteas by their tubular flowers or florets (perfect for fitting the long, curved beak of a nectivorous bird).

Some were also told about the intriguing phenomenon, of “nectar robbers” – birds which bypass the entrance of the flower and instead drill a hole in its base, allowing them to access the nectar without fulfilling their part of the deal by pollinating the plant in turn. (Some of the learners were particularly interested and dismayed to learn that one of their favourite birds, the Southern Double-collared Sunbird, is a particularly notorious nectar thief). This is just one of many examples of the fragility of natural mutualisms – co-evolutionary relationships between species in which both mutually benefit each other, such as between plants and their pollinators – and how they may easily turn into exploitative or parasitic relationships if one species gains an advantage over the other.

Before setting out on their return trip, the learners had a little map-reading lesson, and used their new skill to locate some special sites. They were also treated to even more botanical education, with volunteers pointing out indigenous irises and orchids among the fynbos, and explaining how the dark spots and mottled markings on the flowers attract insect pollinators.

In hosting outings of this kind, the Cape Bird Club hopes to instill a passion for nature and biodiversity among the next generation, as well as providing Cape Town learners with opportunities to experience and learn about the natural world around them – an essential first step in igniting passion for biodiversity conservation among the scientists, community leaders, and legislators of the future.

Special thanks to Joel Radue, Gillian Barnes, Priscilla Beeton, Keasha Wentzel, Zumaya Theunnisen, and Valdeya Florence for assisting with the outing, and to Kristi Rossouw for organising it as well as obtaining parental consent, organising transport for the outing and providing photographs.