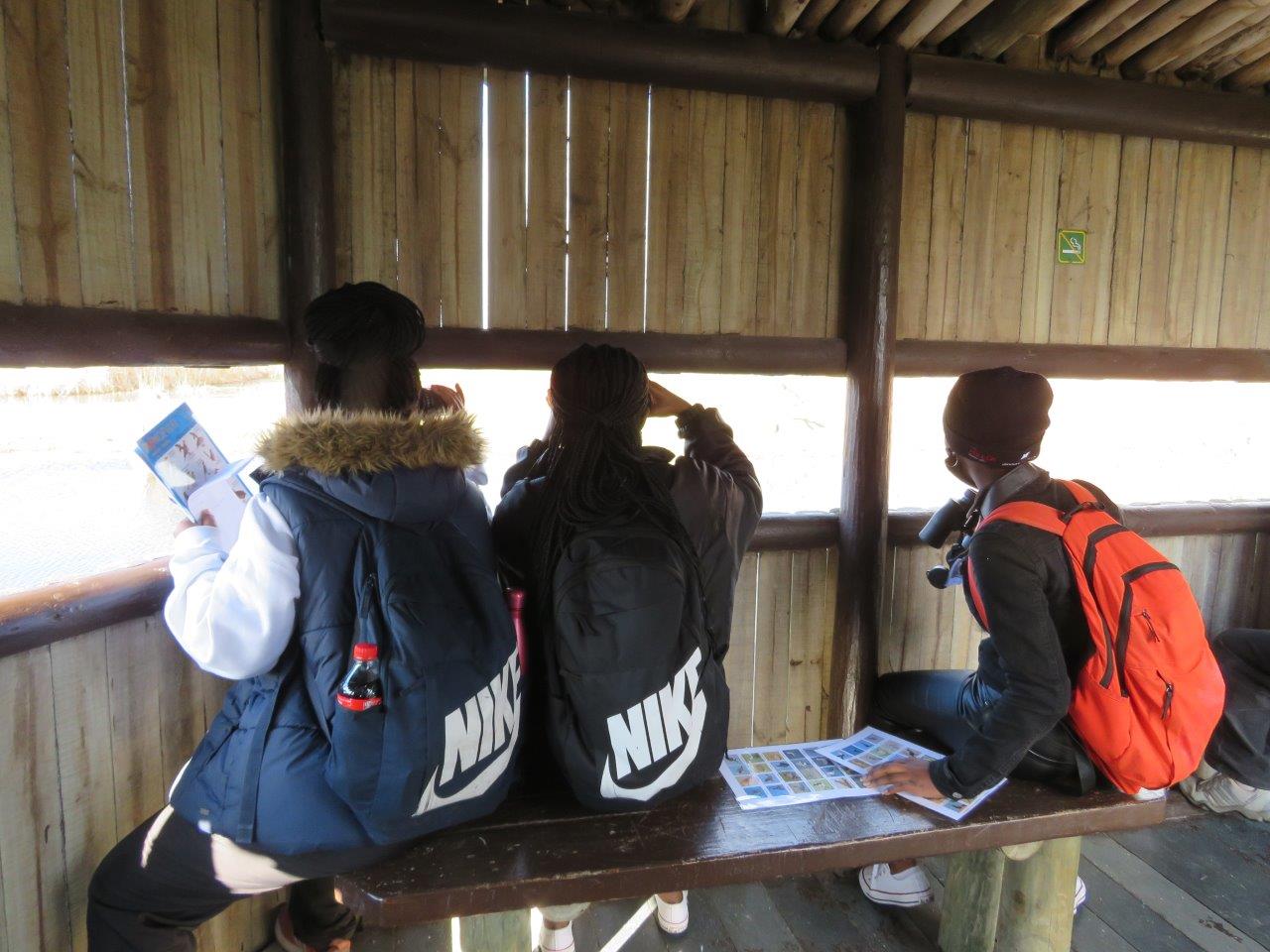 Students from Claremont High had their first bird outing since February 2020 on 16th June. The school bird club has recently been restarted and an enthusiastic group of 18 students met at the school soon after 9 a.m.

From there, we travelled to Rondevlei Nature Reserve, a wetland area in Grassy Park. We were lucky with the weather which was cloudy, but pleasant, despite the rain forecast during the week. The students broke into five groups, each with one or more members of the Cape Bird Club. After a brief welcome and introduction, they set off in high spirits, each with a pair of binoculars and a laminated bird chart to help identify the birds along the vlei.

From the first tower, an excellent view of two African Swamphens, in full sunlight, was one of the day’s highlights, as was the sighting of a Southern Double-collared Sunbird, a few minutes later.

After the recent rains, the water levels were good at most hides. We enjoyed seeing Little Grebe from the tearoom, plenty of Red-billed Teal from the Winterbottom Hide and South African Shelduck “chilling” on the sandbank near Scotto Hide. An African Marsh Harrier gave us several excellent views as it flew over the reed beds.

Before setting out, the teams had been issued with a challenge to try and see the most species of birds.  After two hours of birding, we returned to the picnic site. While the students were excited about the gem of the Malachite Kingfisher, seen by two groups, the adults were more interested in the unusual sighting of a Cape Longclaw. This won Khumo Sigodi, Grade 8, a prize for the best individual sighting.

Otto and Sandy Schmidt’s team scored an impressive tally of 43, narrowly beating the boys’ team, who saw 41 species. However, this team deservedly won their prize for the most enthusiastic and co-operative group as they had shown a keen interest and had asked their group leader, Joel, many questions about the birds they had observed.

We look forward to arranging another outing next term and to introducing other young birders to the birds of the Cape Peninsula. We were encouraged by the positive response and involvement of all the students, as illustrated by the following comment:

“I really enjoyed it. My favourite has to be the Southern Double-collared Sunbird. I hope to see the Malachite Kingfisher next time. I genuinely enjoy things involving nature. It really gives me a sense of peace.” (Thandokazi, Grade 11)

Our thanks go to Nick Chadwick of Claremont High School, for his invaluable help with all the arrangements with the students and to Priscilla Beeton who organised the transport and indemnity forms. Thank you, also, to Gillian Barnes, Graham Pringle, Joel Radue and Otto and Sandy Schmidt of the Cape Bird Club. They gave of the time most generously and shared their knowledge and love of birds so willingly. Having so many CBC members present made it possible to break into small groups, so that the more experienced birders could help the new birders identify birds. We hope they will join us on the next bird outing!