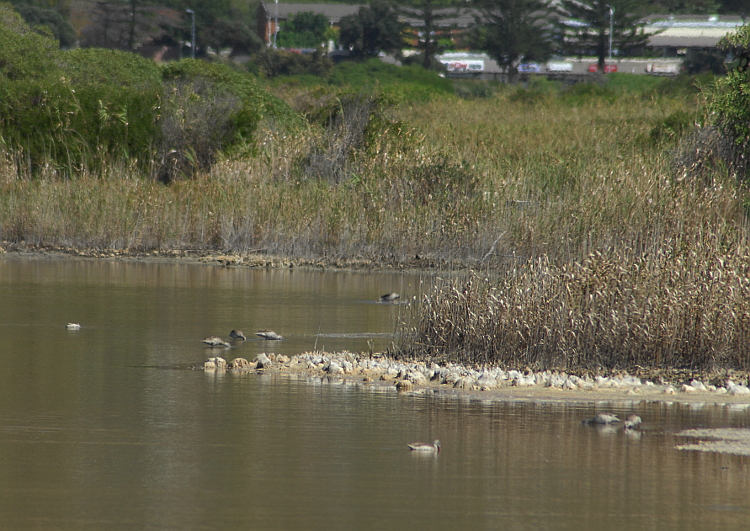 The March 2021 rainfall figures indicate Zandvlei received its highest rainfall in 18 years. This is from the data which the rainfall monitoring group which is in its 23rd year of collecting rainfall around the Zandvlei area.

I have been discussing the management of the Central Pan with the Manager Kyran Wright for 2 years. I am the nominated CBC Conservation Committee member on the Zandvlei Protected Advisory Committee (ZPAAC), Felicity Ellmore is the alternate member. The Covid lockdown scuppered 2020 plans to partially flood the pan to help attract about 10 – 15 wader bird species not seen in the pan for the many years. Species such as Wood, Common, Marsh and Curlew Sandpipers. Greenshank, Ruff, Little Stint, Grey, Three-banded, Kittlitz’s and Common Ringed Plover as example were seen regularly 20 years ago. There has been the odd Greenshank present during these years.

There were plans to pump water into the Central Pan in late February, and then the good rains arrived in March and partially filled it. Some of the water could be ground water as well. Kyran had been carefully monitoring the salinity and in the last week of March, with the count at 20ppm (parts per million). Sea water is 32 ppm. The back regions of Zandvlei measure about 15ppm in the summer period.

There are many reasons and explanations, which help define why there has been a decline in the bird species and some of these are;

Strandfontein sewerage works has been impacted by human demand and behaviour, also a drought period of about 5 years or more. In 2018 during the peek of the drought with drinking water at a bare minimum for Cape Town, the inflow of sewerage water went down from 120 cubic metres per day to 80 and then 60 cubic metres. So there was less water going into the pans. Then the borehole was drilled in Philippi where the City is abstracting water from the aquifer for use by the population of Cape Town, which has doubled in the last 20 years to about 4.5 million people.
With the abstraction of aquifer water, treated sewerage water is being pumped back into the aquifer from the Strandfontein works to the Philippi borehole. We do not know the quantity yet is being pumped in daily.

“The Cape Flats Managed Aquifer Recharge (MAR) groundwater scheme targets water contained in the shallow sandy aquifer underlying much of the Cape Flats. This environmentally sustainable scheme located in the heart of the urban area will store water during wetter years, remediate and improve the quality of water in the aquifer over time and enable integrated urban water management.
The scheme comprises the following elements:

Making use of sophisticated numerical models, airborne and ground geophysics as well as extensive exploration
drilling at approximately 90 locations across a wide geographic area, the scheme has ultimately been consolidated
around the Cape Flats Horticultural Area. Not only is this the thicker and most uniform part of the aquifer with
relatively good water transmissivity, but it is also the only significant area that has not been overlain by urban
development which will enable more effective protection of the aquifer production zones in the longer term. The
scheme has been designed in terms of water use license conditions and requirements.

To date, work has largely been focused on aquifer exploration, drilling of production and recharge boreholes as well
as the laying of interconnecting pipelines. The prevailing water quality at all abstraction zones other than
Strandfontein West, require advanced water treatment including reverse osmosis to remove salts and other
impurities during the initial first few years of operation. The aquifer water quality is however anticipated to improve
once recharge commences.”

So there is even less water available to go into the pans, a system designed 80 years ago. The pans are now only used for emergency overflows from the plant in breakdowns or malfunctions of equipment.
Some of the pans are now fully covered in hyacinth and others are dried up.
Previous managers cleared hyacinth from most of the ponds and kept them partially or full depending on the seasonal requirement for the different species in the last 10 years.

Zandvlei which is very nearby is or was used for all the overflow of birds at Strandfontein, Zeekoevlei and Rondevlei, this is reflected in the comparisons of monthly bird count data indicating movement between the waterbodies over the last 40 – 45 years. In the wet rainfall years when the Philippi farmlands and the wetlands are flooded these areas are used to attract additional overflows from Strandfontein.

The weather patterns have changed and the long term view is the south western parts of South Africa will become drier and the eastern half of RSA will become wetter. If this is true then migratory birds will be stopping off in the wetter areas and not come this far south on their annual journey for food and a warmer climate.

On 30 March 2021 I took these photos at about midday. This is the first time in 18 years there has been water in the Central Pan during March. There were a couple of years in the 1990’s when there was a little rain in February to partially fill the pan.
Clearly the 19 Cape Teal counted were enjoying the high water salinity. There were also 4 Blacksmith Lapwings, a pair of Little Egrets and a Kelp Gull noted.

It may take a few years to get the food sources thriving in the mud to attract the waders, here is hoping.